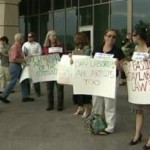 CO, order 9 News” width=”150″ height=”150″ />
AURORA CO– The Aurora City Council has voted to postpone a vote that nonprofits say would keep them from offering help to day laborers.

Monday night, supporters of El Centro Humanitario, a group that promotes the rights of day laborers, came out to rally against the ordinance. The proposed ordinance would change the definition of a “temporary employment agency” to include nonprofits and charitable organizations. If passed, these groups would have to stay 1,500 feet away from employment agencies.

Supporters of El Centro say the ordinance would make it difficult to provide education and other services to day laborers. Aurora City Councilwoman Deborah Wallace says the ordinance is designed to protect businesses. She says that people sometimes congregate outside employment agencies for as many as 10-hours a day.The city council will take up the issue again in two weeks.

END_OF_DOCUMENT_TOKEN_TO_BE_REPLACED

A three-block stretch of Hearst Avenue in Berkeley has become like an urban waiting room full of patients without appointments, all hoping an elusive will soon return to fix their wounds.

These are the wounds of poverty, family and ill-fated business plans that pain the bodies and minds of the day laborers taking their seats on curbs and corners along the avenue each morning with hopes of securing work for the day.

The Multicultural Institute, a nonprofit foundation in Berkeley, through its Day Laborers Program, tries to help by matching workers with contractors and homeowners in need of some construction, gardening or painting.

The program helped set up just under 300 jobs for laborers in fiscal year 2007, said Institute Associate Director Paula Worby. The Institute also has a program in San Mateo County. Many of the laborers came to the United States from Mexico and Central America in search of a for the ills of their home countries. But these days there is no — no money — on Hearst Avenue. The mortgage crisis and slumping economy have radically altered the industry dynamic. They come to Hearst Avenue from all over, some even walking from Richmond for the chance to work. And they wait.

On Wednesday morning, there were no contractors cruising for workers by Truitt & White Lumber Co. at the corner of Second Street and Hearst. It is common for day laborers to congregate in industrial areas and around construction-related businesses to try and score work.

One day last week, Rudy Lara, program assistant for the Institute’s laborers’ program, said he had only coordinated one minor job the previous day.

So minor, in fact, that he couldn’t remember exactly what type of work it was. He doesn’t see that changing any time soon. “Probably it’s going to get worse and worse,” he said.

Lara said just a few years ago people would find work easily from contractors and renovating homeownersNot now. “Everybody stopped (hiring) at the same time,” he said.Alberto Moran, 20, who also works with the program, blamed high prices and layoffs for the lack of work.”Usually in the summer, business picks up. (Now) with the economy, it stays where it is,” he said So they wait. Jose Corado, 49, stood near the corner of Fourth Street and Hearst geared up to paint in a white T-shirt and paint-splattered white pants and a lifetime of painting experience.

The only thing missing was a job.

“It’s not established anything. It’s temporary everything,” he said.

Corado said it had been weeks since he last had a job, even with the Institute staff out every day trying to set him up.

Lara painted a picture of a kinship between the Institute and Truitt & White, with the lumber company’s patrons hiring many of the program’s day laborers.

But Dan White, co-owner of Truitt & White, said that has not been the case over the past 15 years.

White said the company conducted a survey of its customers several years ago.

“The universal response was that the contractors that here almost never use the day laborers,” he said. “Pretty much they’re just standing out there all day.”

Lara said right now, remodeling homeowners are laborers’ best bet for securing work, but even that is slow. Moran said some people try to take advantage of the perceived desperation of the workers — 75 percent are undocumented, according to one major study — and “try to get them for cheap.”

Institute associate director Worby said the program recommends a wage of $12 to $15 per hour for most work, noting that it does not contract with anyone but tries to connect laborers with employers free of charge.

“We’re not taking a cut of the money,” Worby said. “We recommend a wage.”

Jorge Solano, 45, said he came here from Guatemala 10 years ago to make money to send back to his sick wife and four children and hasn’t been back yet.

“They gotta come because over there they make so little,” said Solano in Spanish with Moran translating.Lara and Moran said times are very difficult now, but they will keep coming out and stand with those still waiting. ”You can only hope for the best,” said Moran.

END_OF_DOCUMENT_TOKEN_TO_BE_REPLACED 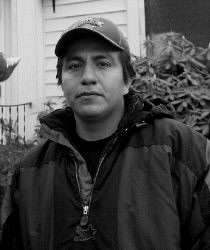 FREEHOLD – Advocates for and members of Freehold Borough’s Latino community are mourning the loss of a person they called a leader in the fight for workers’ rights.

Alejandro Abarca, s 32, who lived in Freehold Borough between 2003 and 2007, ed died two weeks ago in Mexico from injuries he sustained in an automobile accident eight months ago in Mexico.

Frank Argote- Freyre, who chairs the Monmouth County chapter of the New Jersey Latino Leadership Alliance, remembered Abarca as the person who came forward and “pushed for the lawsuit” that was filed against the borough when municipal officials shut down a day laborers muster zone on Throckmorton Street on Dec. 31, 2003.

Earlier that year, Abarca, who was born in Mexico, had helped to form Casa Freehold, an advocacy organization for Latinos. Argote-Freyre said Abarca can be considered to be an “important figure historically in the area.”

Argote-Freyre said members of the alliance are mourning Abarca’s passing.

“He was a leader of the workers and fought for workers’ rights,” Argote-Freyre said. “It is a tragedy to lose someone like that.”

Steve Richter, of Philadelphia, and formerly of Freehold Borough, said Abarca was involved early on in the fight to reopen the muster zone.

“When our darkest hours were upon us, Alejandro was one of the first to come forward,” said Richter, who was an advocate for Freehold Borough’s Latino population. “He gave strength to others and made it easier for others who wanted to help the Latino community by laying the groundwork for them.”

Rita Dentino, a member of Casa Freehold, said she had been in contact with Abarca since his accident. She said he had undergone a number of spinal surgeries and died from complications of the most recent operation.

Dentino called Abarca a “leader” of workers in the area and a “social activist.”

According to Dentino, Abarca was a medical in Mexico. As a member of Casa Freehold, in addition to teaching English to immigrants, Abarca was responsible for teaching medical health issues to members of the Latino community.

“He was a person who wanted to unify everyone in the fight for social justice,” she said. “Although he was most visible to us in Freehold, Alejandro was involved in many social causes in other states as well. He helped to raise the level of awareness and education among people so that they would understand their

Dentino said Abarca was instrumental in helping to organize an alternate employment site for Freehold’s day laborers in 2004, following the closing of the muster zone.

A Mass was celebrated at St. Rose of Lima Church on June 26 and a memorial service remembering Abarca’s life was held on July 1. Abarca left the United States about a year ago to rejoin his wife in Mexico. He is survived by his wife and a 5-year-old son.