US Labor Secretary sends message to America’s under-paid and under-protected:‘We Can Help!’

US Labor Secretary sends message to America’s under-paid and under-protected:‘We Can Help!’

CHICAGO — Secretary of Labor Hilda L. Solis today used the historic setting of Chicago’s famed Jane Addams Hull-House Museum, store on the Chicago campus of the University of Illinois, to unveil the U.S. Department of Labor’s “We Can Help” campaign. Solis committed to helping the nation’s low-wage and vulnerable workers, and reminded them that her agency’s personnel will not waver in protecting the rights guaranteed by law to every worker in America.

“I’m here to tell you that your president, your secretary of labor and this department will not allow anyone to be denied his or her rightful pay — especially when so many in our nation are working long, hard and often dangerous hours,” Secretary Solis told an energized crowd of workers, community advocates and leaders. “We can help, and we will help. If you work in this country, you are protected by our laws. And you can count on the U.S. Department of Labor to see to it that those protections work for you.”

Today’s event marked the beginning of the “We Can Help” nationwide campaign. The effort, which is being spearheaded by the department’s Wage and Hour Division, will help connect America’s most vulnerable and low-wage workers with the broad array of services offered by the Department of Labor. The campaign will place a special focus on reaching employees in such industries as construction, janitorial work, hotel/motel services, food services and home health care. It also will address such topics as rights in the workplace and how to file a complaint with the Wage and Hour Division to recover wages owed.

Through the use of Spanish/English bilingual public service announcements — featuring activist Dolores Huerta and actors Jimmy Smits and Esai Morales, the launch of a new Web site at http://www.dol.gov/wecanhelp and a toll-free hotline, 866-4US-WAGE (487-9243), the department is renewing its emphasis on reaching and assisting workers who often find themselves denied the pay legally guaranteed to them by law. The campaign also underscores that wage and hour laws apply to all workers in the United States, regardless of immigration status.

“The nation’s laws are for the protection of everyone who works in this country,” said Secretary Solis, speaking from the site where President Franklin D. Roosevelt’s Labor Secretary Frances Perkins once worked. “It is appropriate and correct that vulnerable workers receive what the law promises, and that no employer gain a marketplace advantage by using threats or coercion to cheat workers from their rightful wages. I have added more than 250 new field investigators nationwide — an increase of a third — to help in this effort. If you are a worker in America, on this day, we promise you a new beginning and a new partnership to ensure you receive the wages you deserve.”

Chicago’s Hull-House opened in 1889 when Jane Addams, the first American woman to win the Nobel Peace Prize, rented the site to institute and maintain educational and philanthropic enterprises to improve conditions in the industrial districts of Chicago. By its second year of existence, Hull-House was host to 2,000 people every week and today remains a central force in reaching out to Chicago’s poor.

Source: U.S. Department of Labor – We Can Help!

END_OF_DOCUMENT_TOKEN_TO_BE_REPLACED 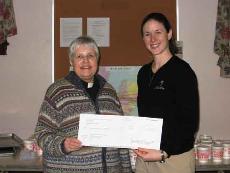 Lutheran Social Ministries of New Jersey provides ity, and hope to those in New Jersey who are hurt, in need or have limited choices, regardless of religious affiliation or background. Their diversified social ministry is a not-for-profit organization that assists more than 3,500 people across the state. They work through local congregations and other non-profit organizations that define the specific needs of people in local communities. Lee Zandstra is the Director of Community Partnering and Lutheran Disaster Response for Lutheran Social Ministries of New Jersey.

The mission statement of Holy Spirit Lutheran Church of Leonia is “transforming lives through the love and hope of Christ.” The pastor of the church, Rev. Peggy Niederer, is also a member of the Board of the Community of Friends in Action, Inc. (CoFiA)

CoFiA addresses the needs of day laborers in eastern Bergen County by supplying lunch once a week to around 60 to 100 workers, between November and April; offering English language classes; distributing bags of food contributed by the Englewood-based Center for Food Action; and maintaining an informal “Workers Link” program that connects homeowners who need jobs done, with people who need work. CoFiA has also recently arranged with OSHA trainers to provide a program on workplace safety to a group of workers.

For more information about the various programs, visit www.communityoffriendsinaction.org or call 201-598-2253. For information about Holy Spirit Lutheran Church or the Lutheran Social Ministries of New Jersey, call Rev. Niederer at 201-403-4341 or Lee Zandstra at 609-699-4133.

END_OF_DOCUMENT_TOKEN_TO_BE_REPLACED 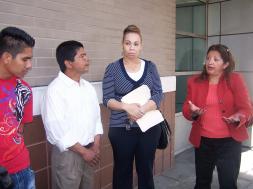 END_OF_DOCUMENT_TOKEN_TO_BE_REPLACED

Labor Department Launches ‘We Can Help’ Campaign for Workers

The U.S. Labor Department has kicked off a nationwide campaign designed to let workers know they have a place to go if they feel they are being treated unfairly at work.

The “We Can Help” campaign is a national effort to inform this country’s most vulnerable and low-wage workers about their rights under federal law. Labor Department officials came to Norristown, for Pa. where there is a strong Latino workforce — a segment of the population that’s taken advantage of.

“We have people who work a hundred hours in a week and are paid straight time for those hours. Employers have a lot of tricks to try to hide that employees actually worked overtime.”

Regardless of immigration status, she says anyone who works in this country is covered by wage and hour laws. She says they also keep an eye on health and safety standards.

END_OF_DOCUMENT_TOKEN_TO_BE_REPLACED

In Arizona, seek the legislature looks set to pass a truly terrifying anti-immigration bill that would, among other thing, ask allow police to arrest undocumented immigrants on the charge of trespassing simply for being in the state:

The Arizona Legislature gave preliminary approval Tuesday to a proposal that would allow the police to arrest illegal immigrants on trespassing charges simply for being in the state.

The provision, which opponents and proponents call a first in the nation, is part of a wide-ranging bill whose sponsors say they hope will make life tougher for illegal immigrants.

The House bill must be reconciled with a version passed by the Senate, something that may be done within the next week or two. Both include measures to outlaw the hiring of day laborers off the street; prohibit anyone from knowingly transporting an illegal immigrant, even a relative, anywhere in the state; and compel local police to check the status of people they reasonably suspect are in the country illegally.

Immigrant advocates call the bill some of the harshest legislation they have seen in a state where battles over immigration are particularly sharp edged.

Allow me to repeat that, because it’s important. The bill would, among other things, force police to check the status of people they “reasonably suspect” are undocumented.

Tell me, who exactly do you think the people police might “reasonably suspect” of being undocumented might be? Because as a white woman, I don’t think that in the event of this bill passing, I’d exactly have to fear being stopped. What this bill would essentially do is not only legalize but require racial profiling and harassment against Latin@s.

Truthdig has more on the bill. It originally passed the Senate back in February — Google searches indicate the issue was being discussed for a couple months prior to now, though it only recently hit my radar — and the most recent news seems to be that an amended version has passed committee in the House. Though the amended version changes the language about “trespassing,” some immigrants rights advocates worry that the new language is even worse. Not only does the rewording potentially criminalize legal residents who fail to carry their documentation, it also “eliminates the requirement that an individual must be in the midst of committing another crime in order to also be charged with transporting, concealing or harboring an illegal immigrant” and contains no exception for humanitarian efforts.

I’m unsure what kind of effect voter action may have at this stage in the game. The ACLU has called the bill unconstitutional, and the best bet may be a legal challenge. Nevertheless, if my searching has failed and you have action alerts or information about organizations that are combating the bill, please leave the information in the comments and I’ll update the post.

END_OF_DOCUMENT_TOKEN_TO_BE_REPLACED 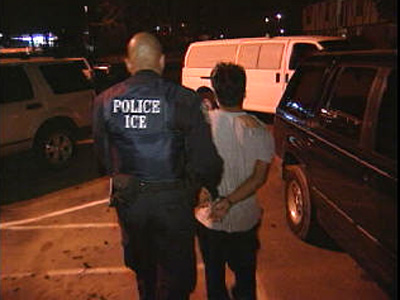