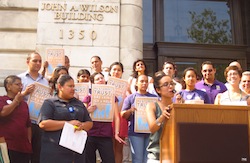 WASHINGTON — As groups around the country rally this week against the Se Communities immigration enforcement program, the District of Columbia approved its own measure on Tuesday to fight back.

In a unanimous vote, the D.C. Council approved a bill that will limit the ability of the federal government to enforce immigration laws by restricting the circumstances in which individuals can be held in the custody of local law enforcement at the request of the Immigration and Customs Enforcement. The nation’s capital joined a handful of cities across the country that are taking a stand against the spate of immigration enforcement measures seen in states like Arizona, where local police are now required to ask people who they suspect of being in the country illegally for their documents, during actions as routine as traffic stops.

Have Some Trust: California to Pass Anti-Arizona Immigration Bill

California is taking a stand on immigration – and it doesn’t exactly jive with a recent ruling by the Supreme Court on the issue.  Last week, online the California State Senate passed the TRUST Act, a move that is in direct contrast to the high court decision upholding a controversial provision of Arizona’s anti-illegal immigration law requiring police to check the status of people they stop for another reason, if they suspect the person is undocumented.  This new bill, also being called the “Anti-Arizona” bill, would lower the number of deportations in the wake of the commission of minor crimes. The TRUST Act will now go to the California state assembly and will most likely pass. The law would mean that, contrary to what goes on now, evidence of against an immigrant could only be passed on to federal officials after a violent or serious felony.

Obama Policy on Illegal Immigrants Is Challenged by Chicago – NYTimes.com

Just weeks after the Supreme Court largely reaffirmed the Obama administration’s immigration enforcement powers in its legal battle with Arizona, federal officials are facing a new, politically tricky clash with local authorities over immigration, this time in Chicago. At a news conference on Tuesday, Mayor Rahm Emanuel said he would propose an ordinance that would bar police officers from turning over illegal immigrants to federal agents if the immigrants do not have serious criminal convictions or outstanding criminal warrants. In contrast to the Obama administration’s long-running confrontation with officials in Arizona, who are mostly Republicans, the latest challenge to the president’s immigration policies comes from Mr. Emanuel, his former chief of staff, and from other Democratic allies in President Obama’s hometown. “If you have no criminal record, being part of a community is not a problem for you,” Mr. Emanuel said, speaking at a high school library in Little Village…

Days after the California senate passed a “Post- Arizona SB1070” bill called the TRUST act, and on the day the Washington DC council is signed a similar bill (Bill 19-585) into law, more than twelve cities launched efforts to develop local policies that restore the trust in law enforcement damaged by the Department of Homeland Security’s coercive “Se Communities” deportation program. Groups are calling for an end to the program and urging local officials to join a trend of municipalities led by Cook County, IL, California, and Washington, DC to counter the criminalization of immigrants, to protect against racial profiling, and to prevent the wrongful extended incarceration of residents for the sole purpose of deportation by setting commonsense standards for how to respond to immigration authority’s voluntary hold requests.

Arpaio’s Legacy Hangs in the Balance

When historians look back on Joe Arpaio’s legacy as Maricopa County sheriff, one thing they are likely to weigh heavily is the outcome of a 4 1/2-year-old racial-profiling lawsuit that will finally be heard in a federal courthouse in Phoenix this month.

The case alleges that the Sheriff’s Office engaged in institutional discrimination against Latinos when it embarked on what has become the defining mission of Arpaio’s 19-year tenure: immigration enforcement. Over the past six years, Arpaio has made it his hallmark, but his efforts have been met by accusations — by citizens, activists and the U.S. Justice Department — that his agency has engaged in racial profiling and discrimination.

The class-action suit marks the first opportunity for those claims to be put to a legal test. A U.S. district judge’s ruling in the matter will determine for the record whether it is possible for a local law-enforcement agency to serve as immigration cop without racially profiling.

The California Senate has passed a so-called “anti-Arizona” bill to prevent racial profiling by police and allow local law agencies to ignore federal requests to detain nonviolent illegal immigrants for deportation, a state lawmaker said. The proposal, called the California Trust Act, would be the first state law imposing “detainer reform,” though local governments in Illinois, Wisconsin and elsewhere have enacted similar measures, according to California Assemblyman Tom Ammiano’s office. No other states have legislation similar to what is now being considered in California, according to the National Conference of State Legislatures. The California bill would set standards that allow police not to respond to requests from U.S. Customs and Immigration Enforcement to detain an illegal immigrant — except in cases where the immigrant is a serious or violent convicted felon, Ammiano said in a fact sheet about his proposed bill. Ammiano is a Democrat from San Francisco.