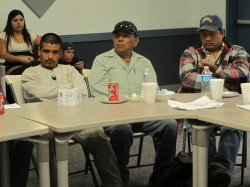 Our wage theft work on Oct. 29 in Oceanside was a huge success thanks to the teamwork of college students, organizers, guest speakers, jornaleros, and household workers who attended. Special thanks go to the Mira Costa college students of the Human Rights Committee of Oceanside for setting up the work at the Mira Costa Community Learning Center and for coordinating the food and other tasks.