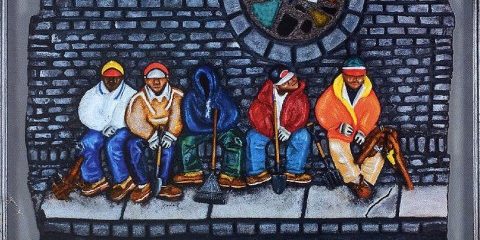 They sit with shovels and rakes and spades, waiting.

The faceless day laborers in Ron Ritzie’s painting, Waiting Game, are a face of Morristown that he cannot ignore.

“You see their images all around town, looking for work,” Ron said on Wednesday at the Morristown Neighborhood House, where he donated a signed giclée (digital ink-jet) print of the painting to Pathways to Work.

That program, now in its third year, matches workers with people seeking to hire casual labor.

'Waiting Game,' by Morristown artist Ron Ritzie. he donated a print of the painting to the Pathways to Work program at the Neighborhood House. Photo by Bill Lescohier

Pathways Manager Rosa Chilquillo said she was “escstatic” about Ron’s gift. “It depicts what Pathways to Work is is,” she said. “We work with anybody who is unemployed, who needs work.”

More than 500 members are enrolled, and more than 4000 work days have been brokered so far, said Rosa.

The program is supported by community groups and churches, and is affiliated with the nonprofit Neighborhood House, which has assisted immigrants and minority groups for more than a century.

There was extra joy at the Nabe on Wednesday. After Ron gave his artwork to Pathways, Rosa distributed gift-wrapped warm clothing to day laborers, courtesy of the Morristown Unitarian Fellowship.

Ron, a 1977 graduate of Morristown High School, is working on a series of paintings about immigration.

“It touched me, because everyone is looking for work, to feed their families and start their own small businesses,” he explained.