Three times, try Fani Gonzalez packed a suitcase, click clutched her daughters in a tearful goodbye and begged the Virgin of Guadalupe for a miracle — anything, just anything, that could keep her from being deported back to her violent home city in Mexico. And three times, she traveled back from the Immigration and Customs Enforcement office in Nashville to… 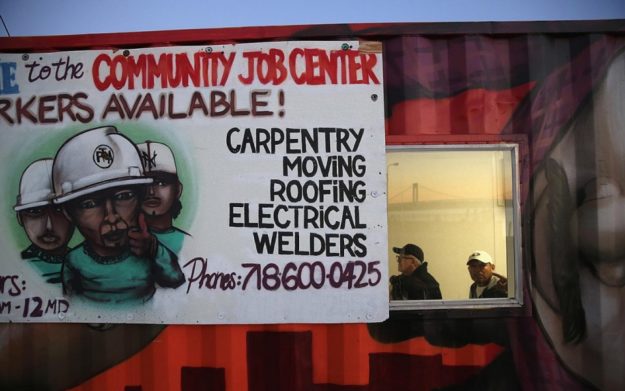 [caption id="attachment_2358" align="alignleft"]Day laborers sit inside Bay Parkway Community Job Center on September 28, __fg_link_1__ 2013 in the Brooklyn borough of New York City. John Moore/Getty Images[/caption]Hurricane Sandy struck fast and furious, and when the waters receded it became clear just how much money and people power it would take to put New York City back together.

As the cleanup began, another reality became clear. Immigrant construction workers, especially day laborers, who became first responders after the hurricane were operating as an underclass in an under-regulated construction industry.

As Reagan said, “Freedom is never more than one generation away from extinction.”

It’s nice to see great teachers receive some of the respect they deserve.

One airline passenger summed up America’s regional differences by bringing loaded weapons on a flight.

Is the league actually doing any good with its big breast cancer awareness campaign?

Because of Obamacare Glitches, Individual Tax Penalty Should Be Delayed

Healthcare.gov won’t be up and running anytime soon.

Obamacare’s Problems Will Go Far Beyond Glitches and Websites

With the shutdown behind them, Republicans can focus on highlighting Obamacare’s flaws.

Republicans have an opportunity to capitalize on Obamacare’s failures, but will they take it?

No Republican Tent Is Big Enough for the Radical Tea Partiers

Republicans must make it clear that racism, serial intransigence or failure to recognize economic reality are not conservative values.

‘Not One More’ – NYTimes.com

President Obama urged Congress on Thursday to revive immigration reform, store which is not dead but not moving, link either. He was talking mostly to House Republicans, though he also urged business, labor and religious groups to “keep putting the pressure on all of us to get this done.”

It’s good that Mr. Obama said “us.” It acknowledges his own role in this continuing disaster.

Much of the responsibility to fix what Mr. Obama calls the “broken immigration system” lies within his own administration. He can’t rewrite immigration laws, but he can control how well — or disastrously — they are enforced. He can begin by undoing the damage done by his Homeland Security Department. Mr. Obama has just nominated Jeh Johnson, a former Defense Department general counsel, to replace homeland security secretary Janet Napolitano, who resigned in July. It’s the perfect opportunity for a fresh start. Here is what it might look like:

STOP NEEDLESS DEPORTATIONS The Obama administration has kept up a frantic pace of 400,000 deportations a year, and is closing in on two million. Those numbers are driven by politics, not public safety. Immigration and Customs Enforcement has wide discretion to determine whom it detains and deports. It can retool all its policies to make noncriminals and minor offenders — the people most likely to benefit from the reform now stalled in Congress — the lowest priority for deportation.

The deportation surge is fed by programs like Se Communities, which does immigration checks on everyone arrested by local and state law enforcement, and Operation Streamline, in which border crossers in the Southwest are prosecuted en masse, with little access to legal representation. Mr. Obama turned the dragnet on, and can turn it off. In marches and vigils across the country, protesters have made one plea on deportations to Mr. Obama: “Not one more.” He should heed it.

ACKNOWLEDGE THE CRISIS As he makes the case for immigration reform, Mr. Obama often mentions the economic consequences of failure — jobs unfilled, crops unpicked, investments not made and taxes not collected. He would do well to highlight the human costs of enforcement without reform, in separating families, and violating the civil and labor rights of workers.

Defiant advocates in Tucson, Ariz., recently blocked buses carrying Operation Streamline detainees, drawing attention to the damage done by indiscriminate deportation. In East Haven, Conn., last week, two police officers were convicted of abusing Latino residents, part of an egregious pattern of abuse. There and elsewhere, the Justice Department has done much to investigate and stop illegal policing and civil rights abuses; Mr. Obama should redouble administration efforts to protect the rights of immigrants and noncitizens.

GET BEYOND POLITICS The talk in Washington has focused on how, after the shutdown debacle, Republicans and Democrats might exploit immigration for political advantage. But last week, the genuine immigration crisis intruded, as if from another universe. Busloads of Arizonans — parents, children, students known as Dreamers — lined up outside House Speaker John Boehner’s office, pleading for a meeting and praying for action on reform. Mr. Boehner had no time for them.

The shutdown was a fake emergency. Immigration is a real one, harming lives every day in every state. Mr. Obama has sometimes been resentful when immigrant advocates remind him of his failures. Now, at least, he has invited their pressure.

President Obama “has the responsibility” to stop deportations of illegal immigrants if Congress proves unable to pass a comprehensive immigration bill, Rep. Luis Gutierrez (D-Ill.) argued in an interview published Friday. “There are devastating effects if the Congress of the United States cannot enact comprehensive immigration reform – then the p…

Do you believe the president should issue, s as some groups have called for, a “ceasefire” on deportations – should halt deportations? I think the President of the United States should listen to all quarters in this debate. And I think that those who call on the President of the United States to re-evaluate his actions on the dreamers and expand it –…

Do you believe the president should issue, treat as some groups have called for, a “ceasefire” on deportations – should halt deportations? I think the President of the United States should listen to all quarters in this debate. And I think that those who call on the President of the United States to re-evaluate his actions on the dreamers and expand it –…