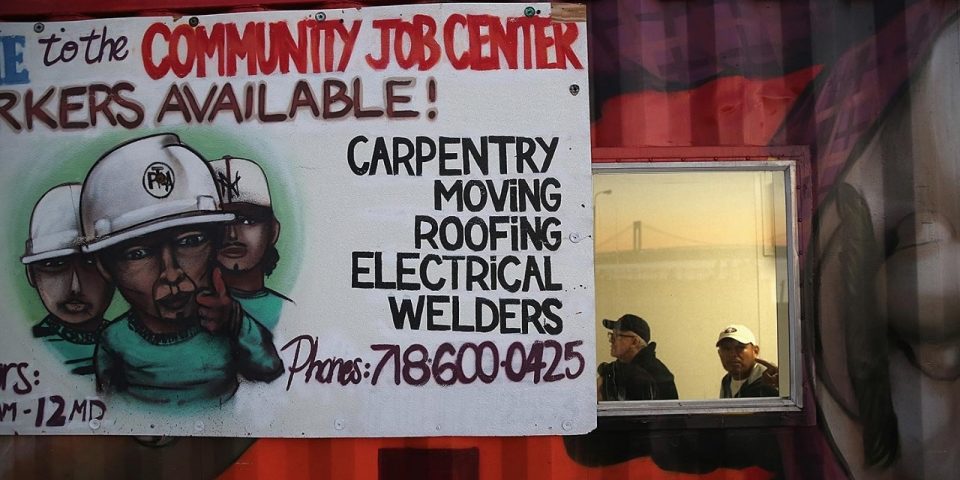 Take Filberto Altamirano, a 55-year-old day laborer and a single father who has been working construction jobs since 2005 to meet his family’s most basic needs. Immediately after the storm, Altamirano started taking cleanup jobs in Coney Island. He worked more than 10 hours per day pumping dark water, taking out sopping wet furniture from basements and piling up the debris in the streets. His employers did not provide him with information about risk, equipment or supplies to clean or repair the homes.

Workers Justice Project, an organization that runs a worker center in South Brooklyn, has observed that immigrant workers involved in the reconstruction effort — a majority of whom were Latino — not only were doing the most dangerous, dirty and difficult recovery work, but also were not provided the most basic personal protective equipment or safety training, putting their lives at risk. (Full disclosure: Ligia Guallpa is executive director of Workers Justice Project, and Jessica Acee chairs its board.)

In a three-story home in Sea Gate, a private gated community in Coney Island that was severely hit by Sandy, three workers were fixing the roof of a home high above a pile of splintered wood and rotting drywall, without any protection from falls. When the employer was asked by one of the workers to provide him with a harness, he became infuriated and told the worker that he had no right entitling him to safety equipment and that he was paying him more than enough to do that type of work.

In the unregulated residential construction industry, profit drives the demand for immigrant, non-union workers. The employers, usually small contractors or homeowners, are more likely to take higher risks in exposing workers to unsafe working conditions and avoid prevailing wage requirements. For instance, the New York Daily News recently reported that subcontractors hired by Signal Restoration Services, a national company, paid workers $10–12 per hour with no overtime for post-Hurricane Sandy restoration work. According to the report, the workers should have been paid at least $16.99 an hour and $25 to $49 an hour for overtime.

In May, New York City announced its plan to use $1.7 billion in federal funds to help rebuild damaged homes. While the federal government can put restrictions on relief dollars at the time they are granted, Hurricane Sandy funds already have been released to local contractors and developers, who are subject to less oversight. A month ago, the city selected three major development teams — Galaxy General Contracting, Arverne By the Sea, LLC, and the Bluestone Organization — to rebuild or repair homes destroyed by Hurricane Sandy. These firms, in turn, will farm out work to contractors and sub-contractors.

Residents of New York City have the right to know which firms are receiving money, whom they are hiring and whether their workers are treated fairly. But it is nearly impossible to untangle the web of contractors, sub-contractors and sub-sub-contractors who have received or will receive city contracts and will be hiring workers. To be sure, these employers reap large economic benefits by not hiring union workers. As we approach the anniversary of the storm, we must hold these contractors accountable and ensure that these federal dollars guarantee livable wages and safe working conditions for those who will rebuild and restore New York.

The storm has cost working communities so much already. Immigrant workers already were disproportionately among the population living below poverty level and lacking housing when the hurricane struck. Despite playing a major role in rebuilding, immigrant workers, many of whom lived in the very neighborhoods wrecked by the storm, were forced to move out without a place to live. Undocumented immigrants who rented a room or an apartment did not qualify for FEMA programs such as the NYC Rapid Repairs or Build it Back program to rebuild their homes. Only homeowners who could prove their immigration status were eligible for federal or state programs.

Some community organizations already are fighting back. Many workers centers, such as the Workers Justice Project, have responded to workers’ safety needs, ensuring access to safety training and personal protective equipment — including gloves, masks, helmets, jackets and earplugs — to help protect workers from hazardous conditions and dangerous chemicals.

Hiring sites such as the Bay Parkway Community Job Center go a long way to improve working conditions. The center facilitates fair, living wage jobs between employers and workers, offers trainings and works and connects workers with community resources. In the last six months alone, the center facilitated a total of 678 jobs, resulting in more than $270,000 in salaries with fair wages and dignified conditions. El Centro del Immigrate, another worker center in Staten Island, also has played a significant role in assisting immigrant families and victims with clothing, food and housing.

But community organizations can only do so much. New Yorkers must demand that city officials recognize the important role played by immigrant workers, ensure that labor laws are vigorously enforced to protect all workers involved in post-Sandy reconstruction efforts and create livable wage jobs that lift low-income communities out of poverty. In this way we can rise up together, a stronger city than before the storm.