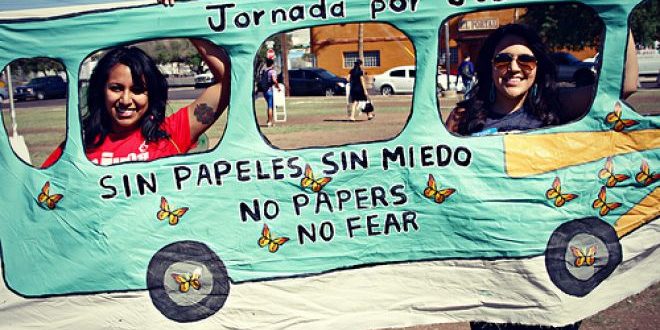 Perhaps never before has there been such a broad coalition and well-formed consensus on the need for inclusion of those who are undocumented in our country. Years of struggle, cheap sacrifice, ask and unprecedented organizing have built momentum to force immigration onto the national agenda and Congress’ docket. Yet, even though legalization is inevitable, the outcome of its legislation is still and uncertain.

As frustration builds with the delay in Congress, more eyes are being cast to the President to take action on the issue. But pressure on the executive branch to use its authority is not a shift away from legislation or, as some have critiqued, a ‘giving up’ on it. First and foremost it is an overdue alleviation of unnecessary suffering. Secondly, it’s exactly the tactic needed to propel any legislation forward.

To pit campaigns for legislative reform and administrative relief against one another is a false choice. Successful social movements throughout history have always been defined by multiple forces, pushing on multiple fronts.

The civil rights movement that won legislation in 1964 first flooded the White House with pens in hopes that President Kennedy would sign an executive order addressing discrimination. It challenged local ordinances to make incremental gains, dramatize the lack of federal protections, and create a dilemma the nation was forced to address. The LGBTQ movement was known in the 80s for direct action as daring as taking over the evening news and more recently for local marriage equality campaigns and courtroom challenges to shift the national conversation in their direction.

In contrast, dominant beltway insiders have insisted on strictly one route to victory. We’re told that the President who will soon have deported 2 million people is our champion. And instead of urging him to use his authority and break the Congressional blockade, we’re redirected to solely focus on attacking the obstruction and extremism of the Republican Party.

Republicans’ racism is obviously intolerable, but the party that made no attempt at reform for immigrants when it had the Presidency and the majority of both chambers in Congress and has since administered unprecedented criminalization shares equal responsibility for the misery inflicted on immigrants. Worse, deflecting pressure from the President and Democrats who still have proactive options at their disposal actually takes away their incentive to use them in the debate.

A strategy that blames one and defends the other may be viable for Democrats seeking political gain, but not for immigrant communities seeking equality.

Given the history of political football between the parties, the Democrats ‘E’ for effort but ‘F’ for results attempts, and the President’s refusal to play his part begs the question for advocates: Are we playing to win reform or being played to win elections?

If the immigrant rights movement wants to achieve more than being another election year issue for politicians to stump on, it will require a diversity of tactics and dilemmas posed to friends and foes alike.

Opening additional arenas in the struggle for immigrant rights and holding every stakeholder accountable is not giving up on reform. It’s playing to win.

State legislation to limit Se Communities, like the TRUST Act, or to win drivers’ licenses both shrink the dragnet that takes away our loved ones. Courtroom challenges like the suit against Sheriff Baca’s detainer practices win new legal ground. Individual casework asserts the right to remain while we push for permanent solutions. Direct action that interrupts the deportation machine raises the political cost of inflicting suffering on our families and adds urgency to the debate. All of the above improve the landscape of the national conversation and do so from a position of strength.

Sensible politicians will be the first to say that pressure both helps at the bargaining table and is required to ensure they keep their eye on the ball.

As we work to protect our families, we need to also protect the historic momentum we’ve built from being squandered by those who may be more interested in their political careers than our family’s futures. The immigrant rights movement is too vibrant, too beautiful, and too resilient to be subordinated for any party’s reelection. The stakes are too high. Those who are pushing in every way are not ‘tone deaf’ as some might suggest. It’s the other way around. Anyone listening at all to “the field” will hear the cry loud and clear, not one more deportation. Not one more family separated. Not one more day of inaction. Not one more.