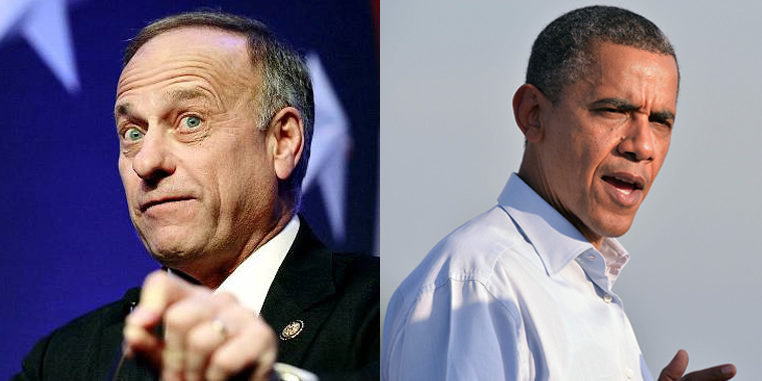 By bringing in the former governor of Arizona to head the Department of Homeland Security, Obama oversaw the Arizonification of the country to the point that when the statedefended itself against the Department of Justice SB1070 lawsuit, it did so by arguing that the section of the state law in question was nearly indistinguishable from the President’s Se Communities deportation program that rapidly nationalized under his first term.

While any insult to immigrants should be turned back, I’m more offended by the misnamed Se Communities program, the administration’s self-imposed quota, and the record 1.7 million deportations brought with it.

How is it possible for a President to deport 1,100 people every single day and still be considered an ally or even a champion of immigration reform? The answer is, it’s not. At least not without a justification that employs the same criminalization that has Democrats up-in-arms over King.

To maintain the administration’s pro-reform rhetoric while routinely undermining it in reality, the President and his agencies cast a cloud of suspicion over the entire immigrant community and worked to conflate ‘immigrant’ with ‘criminal’ at the core of their speeches and practices.

When Janet Napolitano gave a speech in 2011, she said, “Since we just don’t have the resources to remove every single individual who is in the country illegally, like any good prosecutor’s office or law enforcement organization, we set priorities and focus on those who present the biggest danger to communities.” Despite the fact that the Se Communities deportation program nets people at the point of arrest, before ever seeing a judge or having a day in court, ICE press releases announcing the expansion of the program describe it as targeting convicted criminals. The line is repeated again by the President himself in his campaign debate with Mitt Romney;

Anyone who has any relationship with undocumented people know that that is not what the President and his administration has done. It has been our sisters and mothers, our children and loved ones that ICE catches in its dragnet. But, by saying otherwise, the President does what Rep. King did in his comments: make an exception for the valedictorian and criminalize everyone else.

The irony is that the President likely went down the enforcement-first road to build his “tough on enforcement” credentials as a precursor for reform. But by treating dream-eligible youth as an exception and by continuing to lie about who is being deported the President reinforced one of the biggest barriers to legalization, a stigma that paints immigrants as a potential threat instead of a potential neighbor.

Along with King’s apology, let’s give equal energy to an apology from the President to the 400,000 people he deported last year, to the Dream9 he has in the Eloy detention center right now, and to all the families who live in fear of the police as a result of his policies. A termination of S-Comm and a suspension of deportations would be a good place for the President to start.

It’s true that King’s comments are dangerous but not for the reason you might think. The danger of extremists in the immigration debate is not that their beliefs are convincing. Their danger is that they cloak everything else as rational in comparison.