CNN’s ‘Ride-Along’ with ICE is Not Journalism, its Anti-Immigrant Propaganda 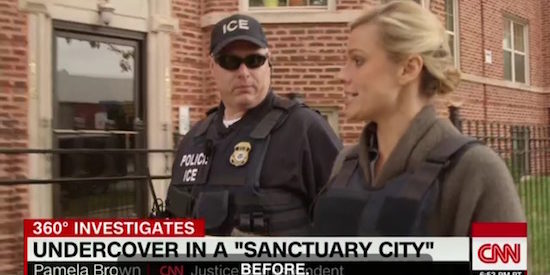 CNN’s choice to do a ride-along with ICE is lamentable.The media should be independent of the politically and economically powerful so that the media can provide us, the people, with the information necessary to prevent or stop abuses of the powerful against the powerless.

As a result, the viewer may learn to think like ICE, and support these policies that do more harm than good. This kind of coverage encourages everyday people who don’t know immigrants or immigrant communities personally to view immigrants as parasitic and polluting outsiders, outsiders who somehow take all the jobs while also cheating welfare systems and committing crimes. Rather than learn from new cultures and enjoy friendships with different people, this leads people to develop a sense of fear and anger towards the new and the different. Fear and anger drives them to seek refuge with people in power who promise to commit more abuses against the powerless – powerful people like Trump who make foolish promises to deport millions and build fancy metal walls that are easily climbed by shaky wooden ladders.

Of course, this kind of coverage that trains people to support the powerful impacts the lives of people who are criminalized, detained, and deported. Children in immigrant communities grow up watching television that vilifies their parents, families, and neighbors. Children and adults alike must remain vigilant against anti-immigrant hate-crimes. These assaults range from mothers being called wetbacks in front of children to fathers being beaten while traveling to and from work.

This form of violence from other people appears small and inefficient to the violence from the government and big business. The Obama Administration separated more families than any other, as his administration has deported more people than the combination of all 19 administrations from 1892-2000. Private detention centers profit from immigrant pain. A child not fortunate enough to witness a parent taken away by ICE in a pre-dawn raid may now sit in a private family detention center along her or his  mother. Private prisons that cut costs to make a profit, often resulting in human rights abuses, are not the only ones who profit; employers use the threat of deportation to silence undocumented immigrants about abuses in the work-place.

What CNN should do is a ‘live-along’, so viewers can learn from working people who suffer the consequences of ICE raids, detentions, and deportations, so people can learn how these actions unnecessarily separate families and harm communities. CNN should also speak with activists and academics who work on these issues, so viewers can learn that detention and deportation of immigrants do more to make money for private prisons than produce safety for the public, because sanctuary cities remain safe place to live. This would provide viewers with a well-rounded understanding of this issue, and help them make better decisions, police the powerful, and accompany the powerless.