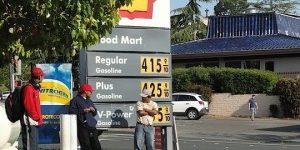 Center would offer English classes, trades works and serve as a community hub for Latino workers

Day laborers wait at the Shell gas station at Bodega and Howard Street on a recent day. A group of activists wants to build a day labor center in Petaluma that would offer English classes, works on various trades, showers and bathrooms and basic health services. They say the center would help protect workers from on the job injury, unscrupulous bosses who don't pay and other abuses. Credit Karina Ioffee

After hitting an impasse more than five years ago, a group of residents has revived the idea of building a day labor center in Petaluma, a place where workers could access basic health services, take English classes or learn skills that would keep them safe on the job.

The people behind the effort are members of the city’s first nonprofit organization devoted entirely to Latino issues, a group called PLACE, which stands for Petaluma Latinos Active in Civic Engagement and which began meeting late last year. The group’s mission is to promote civic and social engagement of Latinos in the community.

“What we are trying to do (with the day labor center) is create is a place where people can feel connected to one another and not feel like they are all alone,” said Gloria McCallister, a PLACE member who also works as a private Spanish tutor. “What many people don’t realize is these people don’t want to leave their countries, but they are being forced to by economic necessity.”

The exact number of day laborers in Petaluma is not known, but PLACE members say it’s clear there is a big need. Day laborers who are injured on the job or not paid have no recourse against the employer.

In addition, day laborers, or jornaleros, as they are called in Spanish, have nowhere to relieve themselves, are taunted and yelled at by passing motorists and have no protection from the elements.

“One time, some kids drove by and started shooting pellet guns at us,” said Juan Luis Angeles, 36, a day laborer originally from Hidalgo, Mexico. “Other times, people scream at us and tell us to go back home.”

But above all else, day laborers say a center would provide a se place to wait for work, without being told to move on by the police. It would also protect people from the elements, say PLACE activists.

“It’s really immoral to see those workers in cold weather, drenched by the rain or waiting in the heat and not do something about it,” said Donna Shearer, a Petaluma resident and professor at Sonoma State University’s OSHER Lifelong Learning Institute.

Even before she teamed up with the fledgling Latino nonprofit, Shearer saw the importance of building a hiring hall for day laborers. She visited centers in Graton and Healdsburg and was impressed by the programs offered, such as English classes and works that improve workers’ skills. At Graton, there is even a coffee cooperative that works with a local company to import coffee from Oaxaca, Mexico, which is served at the center.

A hot cup of coffee and a place to congregate can go a long way for building community, says Israel Escudero, a Latino activist originally from Mexico. So do classes that utilize time otherwise spent just waiting around to learn new skills.

“We will need volunteers to teach workers how to properly use tools,” Escudero said. “We have people going out on projects and hurting themselves because they don’t know how to use the equipment.”

A similar effort in 2005 to build a day labor center floundered after organizers could not build enough momentum for the project. This time, they’ve learned their lesson, said Teresa Lopez, another PLACE member and the daughter of Mexican immigrants.

Organizers have began outreach to the community and are seeking partners to collaborate on various aspects of the center. They also want to make sure day laborers are included in the ongoing discussion, so that they are not only clients of the center, but active participants in its creation.

“It’s always been a dream of ours to have a hiring hall in Petaluma,” Lopez said. Perhaps this time around, the dream is poised to one day become reality.