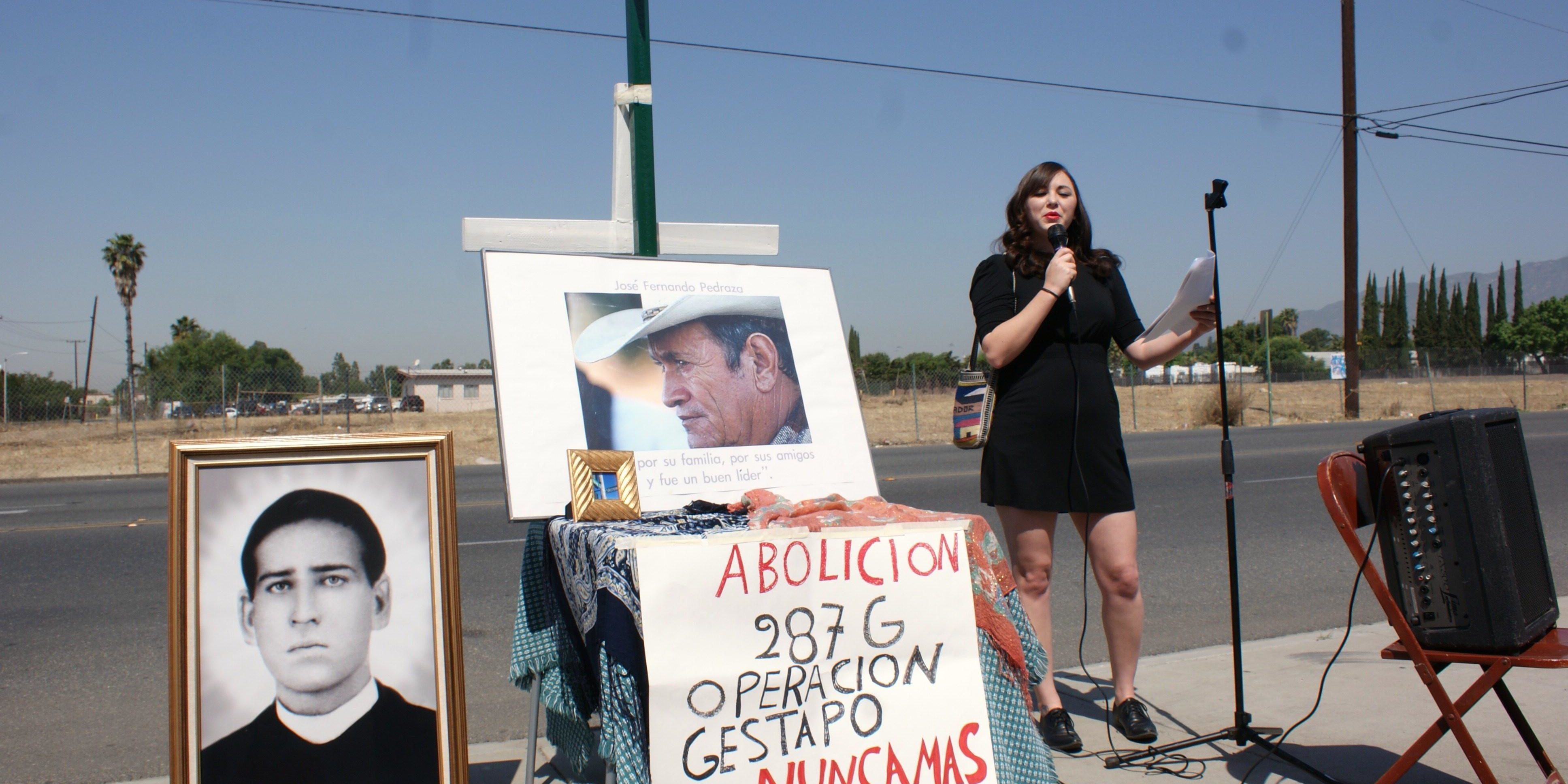 Marina Wood speaks out for social justice at the ceremony which honored Fernando Pedraza, a day laborer who died four years ago. (Herald News photo by Alejandro Cano)

Four years ago last May 5, a day laborer from Rancho Cucamonga lost his life when a vehicle collided with a group of pacifist demonstrators who defied members of the Minuteman Project and their anti-immigrant ideas.

That day laborer was Fernando Pedraza, a proud father and immigrant who every day gathered at the corners of Grove and Arrow in Rancho Cucamonga to look for work. The same corner where Pedraza died has become a sanctuary for immigrants who day after day defied the challenges as they tried to find work.

On the fourth anniversary of his death, family, students, activists and organizers from the Pomona Economic Opportunity Center (PEOC), National Day Laborer Organizing Network (NDLON), and the United Food and Commercial Workers Union (UFCW), in addition to members of the community, gathered on the same corner to honor their fallen comrade and to create awareness about the issue of immigration reform.

“His death will not be in vain. His death represents the suffering of millions of people across the nation who are desperate for immigration reform,” said Jose Calderon, professor of sociology at Pitzer College in Claremont. “Here we are remembering Fernando, but most importantly we are here united against hate, asking public officials for a path to legalization”.

Father Patricio Guillen from Libreria del Pueblo in San Bernardino implored God for mercy and for strength to continue facing the tough road ahead. Guillen understands the road to legalization is paved with severe roadblocks, but he has faith that soon millions of undocumented immigrants will some day be legalized.

Norma Pedraza, the daughter of Fernando, thanked the community for all the support. She remembered her dad as a working man with great goals and ideas, and hoped for legalization that would end abuse and discrimination.

Marina Wood, a student at Claremont Graduate University who teaches English, computer and basic skills to day laborers at the corner, paid respect to Pedraza while urging the community to continue fighting for essential needs.

“This corner is a sanctuary, as many have said before, and in many ways it was because of Fernando Pedraza, who won a court case making it legal for the guys to stand here,” said Wood. “There is a lot I would like to see here at the corner. A bathroom. Some shade. Water. Computers, of course. But really, I want this corner to be empty one day because every person has a job, legally without hiding in the shadows, without living in fear, without being discriminated based on color, language or nationality.

“Community is hard to find and it’s hard to foster, but we really do have a community here and I will not give up. As they say, no pare, sigue, sigue.”