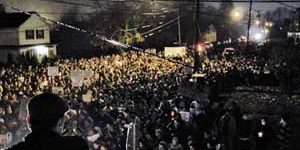 Seven suburban youths from Patchogue-Medford High School on Long Island decided to go out in their SUV on Saturday night, Nov. 8, and “f _ _ _ up a Mexican.” When they came across Ecuadorian immigrant Marcelo Lucero on his way to a friend’s house, they jumped him and beat him. Jeffrey Conroy, a local high school athlete, has been charged with first-degree manslaughter in the stabbing death of Lucero.

On a rainy Friday night following the murder, more than 2,000 people gathered at the site of Lucero’s killing for a memorial vigil. Religious and government officials counseled peacefulness and reconciliation, but many people held signs asking for a reckoning.

Lucero was the eldest son of a poor Ecuadorian family. He left his home 16 years ago at the age of 22 to take the long and dangerous trip to the United States to find work. He traveled to Patchogue in Suffolk County, New York, a magnet for Ecuadorian families.

Marcelo Lucero worked for many years in a dry cleaning store, went to church and sent money home to his mother so she could build a house and survive. He was often sad and lonely and called his mother several times a week. (Newsday, Nov. 16)

Suffolk County has a long racist history. White colonists stole the land from Indigenous people in the 17th century. The enslavement of Africans was legal there until 1827.

In the 1920s, the Ku Klux Klan held rallies in full white-sheeted regalia in Huntington, originally the Suffolk County seat. The Nazi Party chose to set up “Camp Siegfried” in the Suffolk village of Yaphank in the 1930s. Lucero worked just eight miles from there.

Racist realtors have promoted “racial steering” in the growing white suburbs from the 1950s to the present, forcing Black families into designated Black communities with inferior schools and social services. Suffolk County police have been notoriously racist in these communities.

U.S. policies have created a system of forced migration for millions of people. “Free trade” agreements have devastated the national economies of most of the countries of Latin America, Asia, the Middle East and Africa. Millions have left behind their beloved families to become low-wage laborers in the capitalist world market.

The Mexican Consulate, investigating racist attacks on Mexican immigrants in Farmingville—about 10 miles from where Lucero was killed—compared the region to the Arizona border for the abuse of immigrants. Levy did nothing in the face of fire bombings of Latin@s’ houses, attempted murders of Mexican day laborers, racist beatings, and police harassment of Latin@ residents. (AP, Nov. 16)

Levy’s policies mirror federal law, which has produced the terrible Immigration and Customs Enforcement (ICE) raids on workplaces. These raids have intensified in the past year and have resulted in the deportation of 345,000 immigrants so far in 2008, up 16.5 percent from last year. (Boston Globe, Nov. 7)

Political reputations have been made or destroyed by adherence to the anti-immigrant line—from former Gov. Elliot Spitzer in New York, who dared to suggest that undocumented people should be able to get drivers’ licenses, to Sheriff Joe Arapaio of Maricopa County, Arizona, who has become the hero of the Aryan Nation, the Klan and the Minutemen as he conducts a campaign of terror and racial profiling in Phoenix and its environs.

George W. Bush’s Department of Homeland Security has spent billions of tax dollars to fund the raids and incarceration of hundreds of thousands of immigrants of color.

Anti-immigrant policies benefit corporations profiting from the immigrant-prison-industrial complex. The Border Patrol provides the best-paying jobs available for youth in the Southwestern U.S.

When the press and government conspire to demonize a specific group, that is institutionalized racism. As a result, a 40-percent rise in racist anti-immigrant attacks since 2003 preceded the murder of Marcelo Lucero. (AP, Nov. 16)

On that November night when the teenagers decided to ride around looking for a Mexican to attack, they were motivated by the rhetoric of County Executive Levy. They were inspired by public officials who confer legitimacy on anti-immigrant groups in Suffolk and across the U.S.

Foreclosures, low wages and unemployment are hitting hard on Long Island. Bankruptcies are up 77 percent. Anti-immigrant politicians promote racism to obs the real reasons for the economic decline. They inspired the adolescent killers of Marcelo Lucero.

At the vigil, a young Salvadoran man stood on a roof and held up a sign, “The murder of Marcelo Lucero is the responsibility of Steve Levy.”

Carlos Canales of the Workplace Project, an organizer of day laborers in nearby Farmingville, said, “They haven’t permitted the people to speak up and to tell our real feelings which show our anger, which shout our sorrow for the death of Marcelo. They ask us to live in peace, but we can never live in peace because there is no peace if there is no justice.”

Canales told Workers World that Steve Levy is “the spiritual leader of the doctrine of racial hatred” who promotes the “legalization and implementation of the most effective local anti-immigrant laws” in Suffolk County, the most segregated county in the U.S. (AP, Nov. 16)

During the vigil, many circulated a petition asking New York State Gov. David Paterson to call for the resignation of Levy. The May 1st Coalition plans a protest at the governor’s offices in Manhattan on Nov. 21.