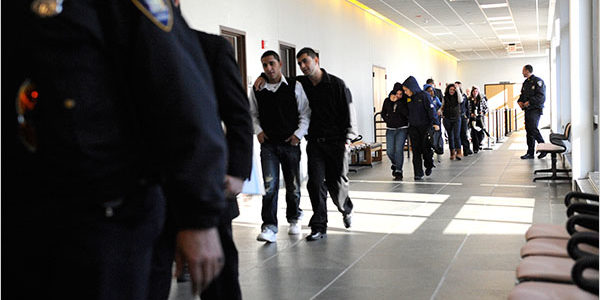 RIVERHEAD, N.Y. — Every now and then, perhaps once a week, seven young friends got together in their hamlet of Medford, on eastern Long Island, to hunt down, and hurt, Hispanic men. They made a sport of it, calling their victims “beaners,” a reference to the staple Hispanic dish of rice and beans, prosecutors said on Thursday.

Nov. 8 was a particularly long and violent day, the prosecutors said. Two of the teenagers set out in their car at dawn and one of them fired a BB gun at a Hispanic man in his driveway, striking him several times. That evening, the group, now seven strong, drank beer in a park and searched for more victims. They found and beat a Hispanic man in neighboring Patchogue, but he was able to escape.

Then, shortly before midnight, prosecutors said, they caught sight of Marcelo Lucero, an Ecuadorean immigrant walking with a friend near the train station in Patchogue. The teenagers surrounded, taunted and beat Mr. Lucero, who tried to fight back. One of the youths fatally stabbed Mr. Lucero, 37, a worker at a dry cleaning store and 16-year resident of the United States who regularly sent money to his ailing mother in Ecuador.

“To them, it was a sport,” Thomas J. Spota, Suffolk County’s district attorney, said in a news conference after the defendants were arraigned. “We know for sure that there are more victims out there.”

Moments earlier, one by one, the youths were led before a courtroom packed with their parents and high school friends, as well as Mr. Lucero’s relatives, many of whom wept as the prosecution detailed the chilling sequence of events.

A grand jury indictment, also unsealed on Thursday, laid out additional charges that the defendants now face for what prosecutors described as earlier crimes against Hispanics.

A seventh defendant, Jeffrey Conroy, 17, a star high school athlete, was charged with second-degree murder and manslaughter as a hate crime in Mr. Lucero’s death. He is scheduled to be arraigned on Monday.

The judge set bail for five of the youths at $250,000 cash or $500,000 bond, and bail was denied to a sixth defendant, Christopher Overton, 16, who has a felony conviction for a 2007 burglary in which an East Patchogue man was killed.

All seven defendants have pleaded not guilty in the attack on Mr. Lucero.

In the courtroom, at a news conference and in the indictment itself, the prosecutors detailed the following chronology of events that preceded Mr. Lucero’s death.

Mr. Spota said three defendants, Anthony Hartford, Kevin Shea and Jose Pacheco, all 17, went out driving five days before Mr. Lucero was killed with the intent of, in their words, “beaner hopping.”

They found a Hispanic man that day whom Mr. Pacheco admitted to punching and knocking out cold, Mr. Spota said. That victim has not stepped forward. Mr. Pacheco later told the police, “I don’t go out and do this very often, maybe once a week,” Mr. Spota said.

About 5 a.m. on Nov. 8, Nicholas Hausch and Jordan Dasch, both 17, fired a BB gun at Marlon Garcia, hitting him several times. In the evening, the seven friends got together and, after failing to find potential victims in Medford, set off for Patchogue, where they saw Hector Sierra walking downtown. They caught up to him and punched him before he ran away.

Shortly before midnight, the teens saw Mr. Lucero and his friend, Angel Loja. They got out of their car and taunted the men with racist slurs. Mr. Loja fled, but the group surrounded Mr. Lucero and punched him in the face. Trying to defend himself, Mr. Lucero removed his belt and swung it, striking Mr. Conroy in the head. Enraged, Mr. Conroy rushed at Mr. Lucero and plunged a knife into his chest. The youths fled, but were soon caught by the police.

Mr. Conroy was the only one charged with murder, Mr. Spota said, because the other six defendants were initially unaware that he had stabbed Mr. Lucero.

Lawyers for the six defendants arraigned on Thursday argued that their clients were being unfairly charged with crimes committed by others in the group. They also said that the defendants were not racist and pointed to the young men’s friends, black, white and Hispanic, filling the courtroom seats.

Chris Kirby, the lawyer for Mr. Pacheco, said in court that his client was of Hispanic descent and therefore incapable of a racist attack. “The idea that he, of Hispanic heritage, would beat up another Hispanic is patently absurd,” Mr. Kirby said.

Mr. Lucero’s killing has brought to the fore a fierce debate about race relations in Patchogue, a comfortable village of 11,700. Latinos make up a quarter of the population, according to the 2000 census. With the numbers of Latinos in the county growing and the economy weakening , some residents say there is a deepening resentment toward illegal immigrants, particularly day laborers.

County officials have insisted the attack was not connected to any simmering racial tensions in Patchogue or Medford. County Executive Steve Levy, long a proponent of crackdowns on illegal immigrants, called the defendants “white supremacists.” Michael Mostow, the superintendent of Patchogue-Medford School District, said there was no racial strife at the high school the teenagers attended and described the attack as “an aberration.”

The killing of Mr. Lucero yielded an outpouring of outrage and grief that rippled beyond the tightly knit Hispanic community here. His body was flown this week to his hometown, the mountain city of Gualaceo, Ecuador, and mourners by the hundreds met his coffin,Newsday reported

At a news conference after the arraignments, Hispanic leaders and members of Mr. Lucero’s family said they were pleased with the upgraded charges. At first, the defendants were accused of fewer crimes, and Mr. Conroy faced a charge of manslaughter, but not murder.

Fernando Mateo, a spokesman for the Lucero family, said that while he was pleased that “justice would be served,” he did not believe recent reports that hate crimes had plummeted in the county in the last few years. “Hunting season is over for this group now,” Mr. Mateo said, as Mr. Lucero’s brother, Joselo, stood silently by his side. “It was a hobby to them, I know it started out as a game, but it turned into a murder.”