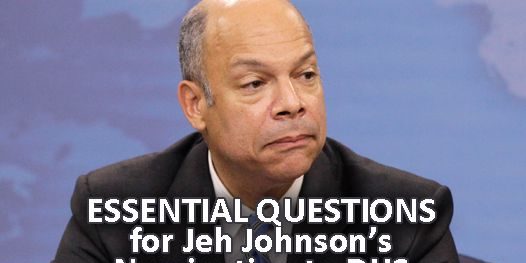 1. It is widely reported that the Obama Administration has deported unprecedented numbers of immigrants, and it is widely suspected that the Department of Homeland Security was previously operating under a self-imposed deportation quota.

Question: Is there a deportation quota?  If so, where does it come from, and will it be reduced or eliminated as part of your tenure or as part of the President’s push for immigration reform?

2. Recent studies have demonstrated that the approach of entangling local police in federal immigration policy has done the opposite of making communities safer.  Instead, it has caused a demonstrable rift between local law enforcement and Latinos & immigrants.  In Maricopa County, Arizona for example, an entire generation is growing with the view that the Sheriffs Department is not to be trusted.

Question: What will you do to repair the damage done to public safety by devolving immigration enforcement to local law enforcement? How will DHS support localities as they seek to restore trust with immigrant communities?

3.  Upon leaving her post at DHS, Secretary Napolitano lobbied in favor of The TRUST ACT, a state law in California that would place limits upon Se Communities, the deportation quota program she had championed.  Many see her new stance as an admission of the deep flaws to the program and vindication for those who have called for it to be ended.

Questions:
A)  Do you support the California TRUST ACT?
B)  When will you suspend the Se Communities program in jurisdictions that have history of or are currently under investigation for racial profiling, like that of Sheriff Arpaio in Maricopa County.
C) Can we expect an end the Se Communities deportation quota program?

4.  Despite several memos issued by previous leadership at ICE, data shows that the rhetoric of the administration does not match the reality of its enforcement policies.  Discretion guidelines are reported to be largely ignored in ICE field offices and have had little impact on narrowing who is targeted for deportation.

Questions:
A)  What will you do to bring the reality of ICE practices into line with the rhetoric of the administration and ensure that discretion guidelines are actually implemented at the local level?
B) What will you do to reign-in specific rogue ICE field offices and agencies?

5.  While the administration pledges its support for immigration reform, it continues to deport approximately 1,100 people each day who could potentially benefit from such legislation in Congress.

Question: How do you reconcile your role in an administration that seeks to be both a champion for immigration reform and set records for the amount of immigrants deported?

6.  The President recently brushed off questions about whether and when he will expand the Deferred Action for Childhood Arrival (DACA) program.  He did not, however, foreclose the possibility.