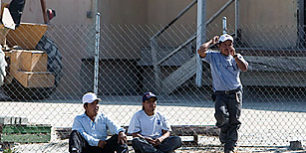 Do day laborers have a right to stand along the highway to offer themselves to would-be employers? Communities in states from California to Connecticut have been cracking down on these roadside gatherings. But a powerful federal appeals court this month overturned a ban in Redondo Beach, Calif., on soliciting work from passing cars.

In a 9-2 ruling by the San Francisco–based Ninth Circuit Court of Appeals, the judges in the majority declared that the ban is an unconstitutional restriction on free speech. The dissenting judges defended Redondo Beach’s right to keep order on its streets.

Day-laborer lines have become a familiar sight across the country. Workers, almost all of them men and many of them Mexican immigrants, stand alongside highways and streets hoping to be chosen for construction work or other manual labor. In 1987, Redondo Beach — prodded by complaints about day-laborer lines — made it illegal “to stand on a street or highway and solicit … employment, business or contributions from an occupant of any motor vehicle.” In 2004, the city ramped things up by creating the Day Labor Enforcement Project, in which police posed as potential employers and arrested day laborers who asked for work. As many as 50 cities in California have bans like the one in Redondo Beach, according to a lawyer for the Mexican American Legal Defense and Educational Fund. But the question of whether day laborers should be allowed to solicit work on the side of the road is hardly a West Coast–only issue. On New York’s Long Island, there have been crackdowns on day laborers that critics say amount to criminalizing “waving while Latino.” In March, Danbury, Conn., agreed to a $400,000 settlement with day laborers who complained that their 2006 arrests, the result of a police sting, were illegal and constituted racial profiling.

Advocates for day laborers sued Redondo Beach, charging that the law infringed on the free-speech rights of the workers and prospective employers, effectively making it a crime for people to seek work. The appeals court agreed. The law is also so broad, the majority ruling held, that, in certain locations, it could make it a crime for concerned citizens to raise money for a disaster-relief fund, for Girl Scouts to sell cookies outside their school or for children to have a lemonade stand outside their home.

Chief Judge Alex Kozinski issued a strongly worded dissent, along with one other judge, that described the ruling striking down Redondo Beach’s law as “folly.” Kozinski argued that day laborers who lined up for work created real problems by littering, vandalizing, harassing women and generally making a nuisance. Municipalities have a right, he wrote, to “se the safety, beauty, tranquility and orderliness of neighborhoods.” In a rhetorical flourish, the chief judge declared that the majority was “demonstrably, egregiously, recklessly wrong.” And in case anyone wasn’t quite sure how he felt about the matter, he added, “If I could dissent twice, I would.”

As entertaining as the dissent is to read, however, the Ninth Circuit got it right on the law. Ordinances like the one in Redondo Beach unconstitutionally restrict people from engaging in free speech in public places. People have a right to stand by the road and offer to work, and people in cars have a right to ask people on the roadside if they want a job. It is core First Amendment expression.

If city officials are concerned about the litter, vandalism and harassment that the dissenters pointed to, they should be sure that they have strong laws against these things, and they should enforce them.

There is, of course, a lot more going on in these battles over day laborers. As the Danbury settlement suggested, race and ethnicity roil below — often barely below — the surface, along with views on immigration policy. Critics of the street-side bans say that if the day laborers lining up for work were U.S.-born whites, the laws either would not exist or would not be enforced.

Day-laborer lines are a Rorschach test. Some people look at them and see foreigners who are making a mess of tidy neighborhoods and threatening public safety. Other observers see the lines as filled with well-meaning people, many of them fathers and husbands, willing to work hard — often for little pay — to be able to food and provide shelter for their families. First Amendment issues aside, which vision people have of the men by the road is likely to explain whether they want the bans to survive or to be struck down.

Cohen, a former TIME writer and former member of the New York Times editorial board, is a lawyer who teaches at Yale Law School. Case Study, his legal column for TIME.com, appears every Monday. You can continue the discussion on TIME’s Facebook page and on Twitter at @TIME.