A place where Guatemalan day laborers are survivors of war 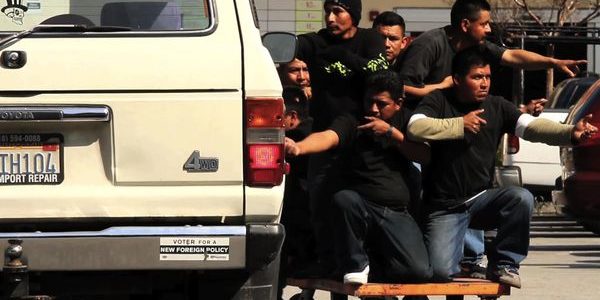 REPORTING FROM MEXICO CITY — A day laborer outside a Home Depot hardware store in northeast Los Angeles is riding in a bright orange ping cart in the store’s parking lot, peering through imaginary binoculars, as if he were on patrol in a dangerous jungle.

Others are crawling under parked vehicles as if squeezing below barbed wire, or diving and body-rolling as if evading gunfire. Before a display for storage sheds, two men lie still on the asphalt, their legs spread, as if dead.

The laborers are undocumented immigrants from Guatemala, and in an unsettling video installation by Mexican artist Yoshua Okon on view at a university gallery in Mexico City, they are war survivors playing themselves.

Before Okon’s cameras, the migrants are reenacting their days fighting in Guatemala’s long and catastrophic civil war.

The four-channel video piece, called “Octopus,” is Okon’s latest and possibly most provocative video in a career in which he frequently pushes against viewers’ comfort zones with the use of improvising non-actors.

A native of Mexico City, Okon has also lived part-time in Los Angeles. He bought a house in L.A. and came to participate in a rite of passage for many new U.S. homeowners in the last decade — hiring day workers.

The men he found at the Home Depot store in the Cypress Park district, it turned out, were indigenous Maya from Guatemala. They spoke a Mayan dialect and very little Spanish or English. They had escaped Guatemala’s war in search of work in the United States.

Some fought for the U.S.-backed military government and others for the leftist guerrillas. Some, he said, showed him scars of bullet wounds. Now, as laborers at the bottom of the U.S. social ladder, they fight for scraps of work in the slumping construction market.

“They’re more afraid of immigration than about talking about the war,” Okon said during a visit this week to the exhibition space in Mexico City’s Roma district. “To me, that’s what the piece is about. It’s the United States. The war is not over. The war is over there.”

Okon, 41, has made films with wanna-be Nazis in Mexico City, an isolated family in California’s high desert getting drunk on “White Russians,” and Mexican police officers who agree to make bawdy sexual gestures they probably shouldn’t in uniform.

While these works usually elicit in viewers a mix of chuckles and creeps, “Octopus” is different.

The new video is guided by a polemical stance, not self-parody. Home Depot customers amble past the bizarre scenes playing out with hardly a blink, showing that workers who build homes in the United States have “always been invisible,” Okon said.

The artist also had to work guerrilla-style in some form himself. He filmed on the store’s parking lot without proper permission. “I had to constantly negotiate with the security guards, until they finally kicked me out,” he said.

Over two days of filming in March, Okon said the men from Guatemala gradually stopped giggling through takes and began to seriously inhabit — or re-inhabit — their roles. ”It felt like a job,” one of the workers later told the LA Weekly. And indeed it was; Okon said he paid the men a double day-rate for their time.

“Octopus,” commissioned by the Hammer Museum at UCLA, will show at the Casa Jose Galvan exhibition space in Mexico City through January. Next year, Okon plans to take the piece toProyectos Ultravioleta, an arts space in Guatemala City.

A single-screen version of the 18-minute piece is viewable here. In one shot, as seen above, a motorist drives past Okon’s cameras with a bumper sticker that reads, “Voter for a new foreign policy.”

The shot was not staged.