October 11, 2011. SAN FRANCISCO, CA. Dozens of lesbian, gay, bisexual, transgender, and queer (LGBTQ) organizations across the country are adding their voices to the growing national movement to end ICE’s controversial fingerprint-sharing “Se Communities” (S-Comm) program. By forcing local law enforcement to share fingerprint data for every person arrested – no matter how valid or minor the charge – with federal immigration authorities, S-Comm has contributed to skyrocketing numbers of detentions and deportations.
Prompted by ICE’s unilateral move to make the highly debated program mandatory, national, regional, and local LGBTQ organizations—including the National Gay and Lesbian Task Force (NGLTF), the National Center for Lesbian Rights (NCLR), and the National Coalition of Anti-Violence Programs (NCAVP) — felt compelled to mark National Coming Out Day by adding their voices to the national upsurge of opposition to S-Comm today.
“NCAVP is concerned by the impact of police/ICE collaboration on LGBTQ survivors of violence. It is not uncommon for LGBTQ survivors of violence to be arrested when they call police for help. NCAVP member programs know that many LGBTQ survivors do not access police for safety when they experience violence, and the Se Communities program may increase fear, barriers to safety, and risk of detention and deportation for LGBTQ immigrant communities,” said Chai Jindasurat, National Coalition of Anti-Violence Programs (NCAVP) Coordinator at the New York City Anti-Violence Project. “In honor of this year’s National Coming Out Day, NCAVP calls for an end to a program that has severe consequences for LGBTQ people.”
In a statement released on National Coming Out Day, over sixty LGBTQ groups call on President Obama to take immediate action to eliminate this destructive program. California Assemblymember and longtime LGBTQ rights activist Tom Ammiano echoed this call: “Every day LGBTQ Californians are being unfairly deported leading to tragic consequences for communities both here and across the country. I am urging the Obama Administration to end the deception around S-Comm and suspend this damaging program.”
“The LGBTQ movement has often been an example of how to hold your head high with pride in the face of discrimination. As migrants, we’re inspired by National Coming Out Day and strengthened by this show of solidarity,” said Sarahi Uribe, Organizer of the National Day Laborer Organizing Network.
“We hear regular reports of LGBTQ people who find themselves in deportation proceedings after being profiled by their race, class, sexuality, and gender as they go about their daily lives or even as they navigate domestic violence,” said Morgan Bassichis of the San Francisco-based Community United Against Violence (CUAV), the country’s oldest LGBTQ anti-violence organization. “Rather than making anyone more ‘se’, S-Comm endangers all communities by tearing at the fabric of family and support networks and creating a culture of fear.”
The statement marks a historic confluence of movements for LGBTQ rights and migrant rights, and increased attention to migrant issues within LGBTQ communities. “On this National Coming Out Day, we recognize that LGBT immigrants need more than acceptance from family, schools, and neighbors to be “out”: they need to be free from profiling, detention, and deportation,” said Mónica Enriquez-Enriquez of Streetwise and Safe, an organization working with LGBTQ youth of color in New York City and signatory to the statement.
For background information on the Se Communities program, read “Restoring Community” at http://altopolimigra.com/s-comm-shadow-report/
Founded in 1979, Community United Against Violence (CUAV) works to build the power of LGBTQQ (lesbian, gay, bisexual, transgender, queer, and questioning) communities to transform violence and oppression. We support the and leadership of those impacted by abuse and mobilize our broader communities to replace cycles of trauma with cycles of safety and liberation. As part of the larger social justice movement, CUAV works to create truly safe communities where everyone can thrive.
National Day Laborers Organizing Network (NDLON) works to unify and strengthens is member organizations to be more strategic and effective in their efforts to develop leadership, mobilize, and organize day laborers in order to protect and expand their civil, labor and human rights.
Streetwise and Safe (SAS) is a New York City-based organization working to create opportunities for LGBTQQ youth of color who experience homelessness, policing, and criminalization to claim a seat at policy discussion tables as full participants, speak out on their own behalf, act collectively to protect and advance their rights, and demand choices that allow them to maximize their safety, self-sufficiency, and self-determination.
-30- … 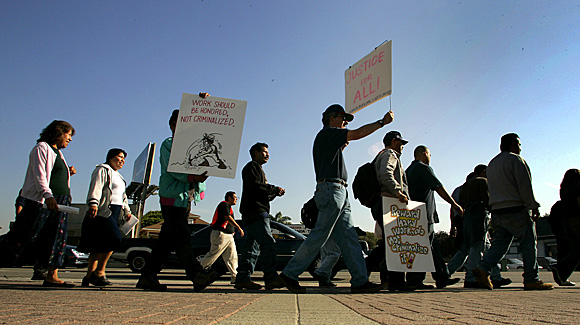 In what’s likely to be a final effort to salvage its controversial day laborer law, officials in Redondo Beach said they would urge the U.S. Supreme Court to review an appeals court ruling that declared the city’s anti-solicitation ordinance unconstitutional.

The U.S. 9th Circuit Court of Appeals voted 9-2 last month to strike down the law, which has been on the books in Redondo Beach for about two decades.

Experts said the ruling could have consequences for dozens of other cities that have adopted anti-solicitation laws, which are often used to control day laborers who gather on public streets and sidewalks while seeking work.

City officials have maintained that the ordinance was meant to promote traffic safety, but it sparked controversy in 2004 when police arrested more than 60 laborers in a monthlong operation dubbed the Day Labor Enforcement Project.

Though the appeals court was decisive in its ruling, Chief Judge Alex Kozinski issued a sharply worded dissenting opinion, arguing that “when large groups of men gather at a single location, they litter, vandalize, urinate, block the sidewalk, harass females and damage property.

“The majority is demonstrably, egregiously, recklessly wrong,” he continued. “If I could dissent twice, I would.”

“If cities can’t do that then there’s no way for cities to be able to responsibly protect public safety and welfare,” Webb said.

But Pablo Alvarado of the National Day Laborer Organizing Network, one of the plaintiffs in the case, called the appeal a “scam of taxpayers’ money.”

“This is a violation of human and civil rights,” he said. “I thought this was going to be a time for dialogue, for openness, for finding constructive solutions — not engaging in this type of back-and-forth anymore.”

Coloki, Inc., a nonprofit group set up by Merokean Liz O’Shaughnessy to run the Freeport Work Hiring Trailer that aids impoverished day laborers, will host a benefit fundraiser at Mulcahy’s Pub and Concert Hall in Wantagh on Saturday, Nov. 19, from 5 to 9 p.m.

The evening will include an open bar, open buffet and live music?featuring Cat Parr & Friends.

Tickets are $50 each. Tax-deductible donations of $50 per ticket should be made out to Coloki Inc. and sent to Liz O’Shaughnessy, 27 Surrey Drive, Merrick, N.Y. 11566, or donations can be made safely via PayPal on Coloki’s website at colokiinc.com.

The Freeport Work Hiring Trailer, which is made possible in part by a grant from the nonprofit, Port Washington-based Hagedorn Foundation, provides immigrant day laborers with a warm, dry, safe place to stay while they wait for landscapers and contractors to pick them up for jobs. A the same time, the trailer offers warm meals to dozens of day laborers who might otherwise go hungry, along with English language lessons.

Pablo Alvarado, Director of the National Day Laborer Organizing Network, responded to Secretary Napolitano’s speech today at American University with the following statement:
“We are happy to hear Secretary Napolitano mention S-Comm and ‘termination’ in the same sentence. Despite the political spin and marketing campaign to defend a failed program, S-Comm has proven to be a disastrous policy for our nation and for our communities. It should be ended before it leads to the further Arizonification of the country.
Facts do matter, and the fact remains that New York, Illinois, and Massachusetts have all rejected S-Comm while Alabama, Arizona, and Georgia embrace it wholeheartedly. The program has undermined public safety, imperiled civil rights, and moved the immigration debate in the wrong direction. Rather than bring us closer to immigration reform with legalization for millions of Americans-in-Waiting, S-Comm has been used to defend the false premise that the country needs enforcement quotas to maintain unprecedented rates of deportation. This insidious premise is resulting in the criminalization of an entire generation of our society.
Secretary Napolitano is correct that ‘two opposites cannot simultaneously be true.’ The Administration cannot set its sights on deporting more hardworking individuals than President Eisenhower’s “Operation Wetback” and at the same time authentically claim it is advancing immigration reform. It cannot criminalize and legalize people at the same time. Deportation rates must decline, S-Comm must be ended, and in places like Maricopa County in Arizona, human rights must be vigorously defended and prioritized by the Administration.
We acknowledge the Administration inherited broken immigration laws and a poisonous political environment, but S-Comm has made matters worse. We will continue to work with a growing chorus of voices calling for its complete termination.”
###…

Portland, sick OR: In recent days, our fight to build the opposition against HR 2885, the E-Verify bill, has gained momentum! In a letter to the VOZ team, US Representative Earl Blumenauer (D-OR) expressed his shared opposition to the bill. Blumenauer’s notes the technical flaws of the bill, as well as its misdirected ideology. Blumenauer notes, “E-Verify is a flawed system that too often misidentifies otherwise eligible workers.” He continues to argue that “even a flawless E-Verify program only addresses one aspect of a complex issue… We should reform border policy to address terrorists and cartels- not families’ simply trying to improve their lives.” While Blumenauer’s letter is a great step in building opposition to the E-Verify bill, there is still much work to be done. We are hopeful that the rest of the Oregon delegation will follow Representative Blumenauer and declare their opposition to the bill. You can help in this process! Call your representatives, and spread the word about E-Verify.