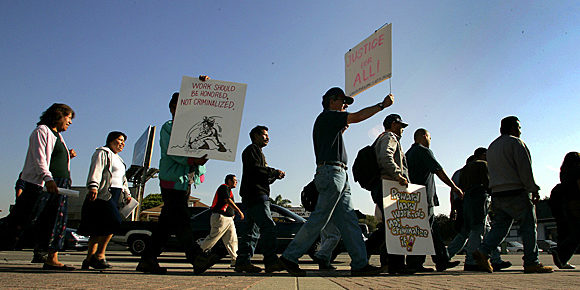 In what’s likely to be a final effort to salvage its controversial day laborer law, officials in Redondo Beach said they would urge the U.S. Supreme Court to review an appeals court ruling that declared the city’s anti-solicitation ordinance unconstitutional.

The U.S. 9th Circuit Court of Appeals voted 9-2 last month to strike down the law, which has been on the books in Redondo Beach for about two decades.

Experts said the ruling could have consequences for dozens of other cities that have adopted anti-solicitation laws, which are often used to control day laborers who gather on public streets and sidewalks while seeking work.

City officials have maintained that the ordinance was meant to promote traffic safety, but it sparked controversy in 2004 when police arrested more than 60 laborers in a monthlong operation dubbed the Day Labor Enforcement Project.

Though the appeals court was decisive in its ruling, Chief Judge Alex Kozinski issued a sharply worded dissenting opinion, arguing that “when large groups of men gather at a single location, they litter, vandalize, urinate, block the sidewalk, harass females and damage property.

“The majority is demonstrably, egregiously, recklessly wrong,” he continued. “If I could dissent twice, I would.”

“If cities can’t do that then there’s no way for cities to be able to responsibly protect public safety and welfare,” Webb said.

But Pablo Alvarado of the National Day Laborer Organizing Network, one of the plaintiffs in the case, called the appeal a “scam of taxpayers’ money.”

“This is a violation of human and civil rights,” he said. “I thought this was going to be a time for dialogue, for openness, for finding constructive solutions — not engaging in this type of back-and-forth anymore.”