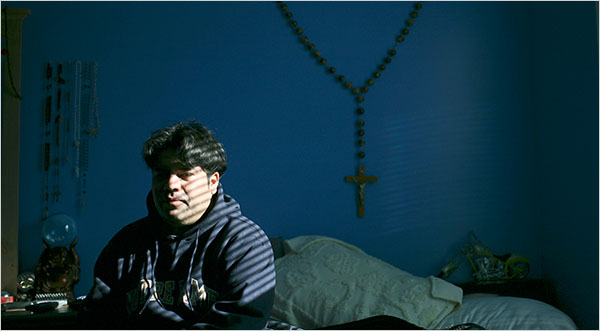 Damon Winter/The New York Times
Carlos Angamarca said he and a friend were attacked in Patchogue by a group of teenagers.
By ANNE BARNARD
NEW YORK TIMES
Published: January 8, 2009

PATCHOGUE, health N.Y. — Carlos Orellana, a construction worker from Ecuador, was walking home from work in this small Long Island town on July 14, he said, when about a dozen teenage boys on bicycles knocked him to the ground and kicked and beat him, shouting, “Go back to Mexico.”

Mr. Orellana, 39, said he lost consciousness, and when he came to, his shoes and $20 were missing. He called the police. He said he recognized some of the boys, who often hung around Main Street. But the mug shots the police showed him were no help. The police classified the case as a second-degree robbery, he said, and no one was arrested.

Attacks like the one Mr. Orellana reported have drawn new attention since Marcelo Lucero, another Ecuadorean immigrant, was stabbed to death on Nov. 8 near Main Street. Prosecutors say seven 16- and 17-year-old boys, mostly from neighboring Medford, were attacking Mr. Lucero when one of them rushed at him with a knife. The attacks were such an established pastime that the youths, who have pleaded not guilty, had a casual and derogatory term for it, “beaner hopping.” One of the youths told the authorities, “I don’t go out doing this very often, maybe once a week.”

That was not news to Latinos in Patchogue, who say that regular harassment, muggings and assaults have had them living in fear — 11 men told The New York Times of 13 attacks, nine of them in the past two years.

But the Suffolk County police said it was news to them.

“We hadn’t noticed this,” Richard Dormer, the Suffolk County police commissioner, said in an interview last month when asked about the attacks by groups of young men. “And that’s a concern to us.”

Mr. Orellana is one of many Latino residents who believe that Mr. Lucero would be alive today if the police had taken crimes against them more seriously and recognized them as symptoms of a larger problem. While some Latino immigrants say they are reluctant to report crimes because they are in the country illegally or fear the police will assume they are, they and their advocates believe the police did not see a pattern because they did not want to see one.

“I told people, here the authorities are waiting for a white to kill a Hispanic or a Hispanic to kill a white,” Mr. Orellana said. “They keep attacking and robbing, and nothing changes. There had to be a death, and the death was Lucero.”

Prosecutors say the teenagers charged in the attack on Mr. Lucero chased another Latino man and shot a BB gun at a third that day. But the problems began long before Mr. Lucero’s death. And by the men’s accounts, the series of attacks involved far more teenagers.

Last month, Times reporters spoke with the 11 Latino men who gave detailed accounts of attacks they said they experienced or witnessed. The attacks the men described fit a pattern: Groups of teenagers — often, the men believed, from neighboring towns — roamed Patchogue’s grid of s and houses and assaulted Latino men unprovoked.

The men said the groups were made up mostly of white male teenagers, but sometimes included black or Latino attackers or female onlookers.

The men’s stories could not be independently verified. Some had police complaint numbers or bills; most did not.

The Times provided Suffolk County police officials with details of each account. Mr. Dormer said the police were conducting intensive investigations of several cases brought to their attention after Mr. Lucero’s death, but declined to comment on individual cases.

Immigrants say they bear some of the responsibility, because some did not report past attacks. Many fear the police because they are in the country illegally; some give false names; some do not know how the criminal justice system works or how to document their dealings with the police. Immigrant advocacy groups say the police often fuel a cycle of mistrust by inappropriately asking about immigration status; the police deny that.

But a majority of those who spoke with The Times said they or a witness called the police. Several said officers took down information and had them look at mug shots. Yet five men who reported assaults believed the police did not take the cases seriously enough. One said an officer told him he could not arrest a minor; another said the police discouraged him from filing a report; a third said he saw a victim arrested after his assailants told officers he had started the fight.

On Dec. 3, the advocacy group Hispanics Across America and the Congregational Church of Patchogue invited victims to the church to report cases to advocates and authorities, including the police, the district attorney, the Federal Bureau of Investigation and the Justice Department. Most of the men who spoke with The Times reporters were among those who reported their stories at the church. Mr. Orellana told his story, and the next day the police brought more mug shots to his house. This time, he identified several of his attackers.

One, he said, was Jeffrey Conroy, the well-known high school athlete charged with plunging the knife into Mr. Lucero.

In early December, Commissioner Dormer ordered the department to audit thousands of police reports filed last year in the Fifth Precinct, which includes Patchogue, “to see if there was something going on that we missed,” he said.

“We’re not naïve enough to think that nothing was going on,” he added.

Even though the department has CompStat, a computerized system that helps track patterns, the police could have missed a trend if officers recorded similar incidents inconsistently, as “disturbance,” “police information” or “harassment,” Mr. Dormer said. Officers will receive new guidance on report writing, he said.

Fernando Mateo, president of Hispanics Across America, agreed. “This was a pattern,” he said, “and the cops knew about it.”

LatinoJustice has called on federal authorities to investigate police conduct, and the Suffolk County district attorney is investigating more than a dozen complaints of violence against immigrants.

Patchogue’s Main Street has red-brick storefronts and, around Christmas, a crèche that blares “Silent Night” loudly enough to be heard inside passing cars. Unlike other Main Streets decimated by big-box stores, the one here still functions as a town center.

One reason Main Street is still alive is foot traffic from immigrants, who have settled in the surrounding villagelike blocks. But the influx has placed Patchogue at the center of a painful debate.

Driven by immigration, Long Island’s Latino population grew 70 percent between 1990 and 2000, according to census data, and has grown faster since then, officials say.

Amid these shifts, tensions have risen, and in some cases, violence has erupted. In 2000, two men posed as contractors, abducted two Farmingville day laborers and beat them nearly to death with a crowbar. In July 2003, a group of teenagers set fire to the house of a Mexican family in Farmingville.

County Executive Steve Levy made tough policies against illegal immigration his central issue and was re-elected in 2007 with 96 percent of the vote. In 2004, he tried to deputize police officers for immigration checks but dropped the plan after a police union argued that it would make immigrants afraid to talk to the police.

Over the years, immigrants, drawn by relatively affordable housing, settled into Patchogue, a town of about 12,000 that had been mostly white. Since 2003, the Latino student population of the Patchogue-Medford School District has swelled to 24 percent from about 4 percent.

Paul V. Pontieri Jr., Patchogue’s mayor, said he believed the immigration debate painted illegal immigrants as “animals” and spurred crime by people who saw them as “expendable.” He said some residents blamed the newcomers, and the attendant costs, for austerity budgets that forced cutbacks in the high schools.

“It goes from the dining room table to the conversation at the lunchroom table — kids sitting around talking about how the senior trip they’ve been waiting for is going to be canceled,” he said. “We as the adults have to frame our conversations in a different way.”

Patchogue village officials took enough notice of menacing teenagers that last summer they adopted an ordinance allowing code enforcement officers to confiscate bicycles ridden on the sidewalk, and posted unarmed officers behind the town library, where immigrants complained they were often harassed. Mr. Dormer said the county police had made outreach efforts before Mr. Lucero’s death, holding community meetings and teaching officers basic Spanish. Yet he said no residents told the police about the scope of the problem around Main Street.

After the killing, Mr. Dormer transferred a Hispanic commander to lead the Fifth Precinct, assigned a Spanish-speaking foot patrol officer to Patchogue and named Sgt. Lola Quesada, born in Ecuador, as a community liaison. He said that the department would investigate any reports of police negligence.

On Sept. 22, 2007, Sergio Yanza was sitting on his porch on Evergreen Street with friends when 16 to 20 people, ranging from 13 to 18 years old, poured into the street in front of the house, he said. They threw rocks and sticks — and later, logs of firewood — jumped on his car and shouted ugly things about “Spanish” people.

The youths fled before the police arrived. Hit in the head with a rock, Mr. Yanza, 38, went to the for eight stitches. He never received a police report and does not know what became of the case. The police declined to comment.

Carlos Angamarca, a construction worker from Ecuador, said he and a friend were attacked in the summer of 2007 by a group of white youths who beat and kicked them. He begged a woman driving by to call the police, but she laughed. A few minutes later, he said he saw the youths get into her car and drive away.

“It’s like a hunt,” Mr. Angamarca said. The police showed him mug shots, but he recognized no one.

Last July 11, five or six boys surrounded Mauro Lopez, 45, a native of Ecuador, on a dark Patchogue street, he said. They sprayed a stinging liquid in his eyes, kicked him, bit his ear and beat him with batons or baseball bats. They stole $300, his identification, his clothes and his shoes, he said.

Later, the police drove by as Mr. Lopez crouched nearly naked on the sidewalk. The police, he said, spoke to him from the car in Spanish. But Mr. Lopez was afraid, and he told them, “No problem,” then walked home. The police, he thinks, did not notice his injuries.

The police opened an investigation after Mr. Lopez reported the attack last month. They said that he told them the car was a block away, and that they do not know whether he spoke to an officer that night.

Mr. Lopez said he d his wounds at home, embarrassed and alone. “I wanted to swallow it myself,” he said. Five months later, he still has headaches and blurred vision. He has not been able to work. 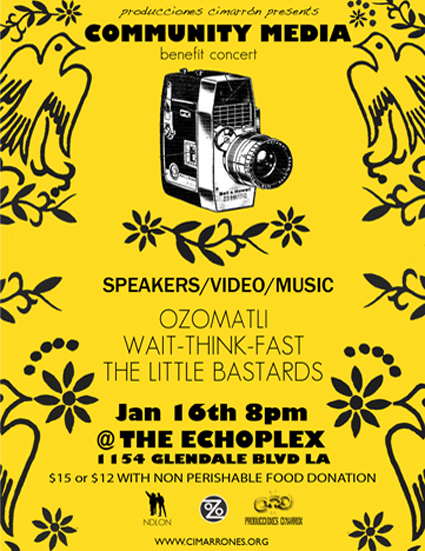 $15 or $12 with non-perishable food donation (Food Donations will be distributed among Los Angeles day laborer centers.