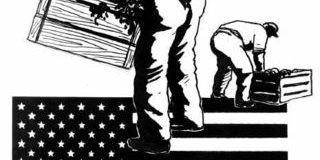 Diaz was put to work in a residential neighborhood that had been flooded. The American workers who were involved in the cleanup, he noted, had been given masks, gloves, boots and sometimes special suits to avoid infection. No such precautions were afforded Diaz and his crew of undocumented immigrant workers. “We were made to work with bare hands, picking up dead animals,” he says. “We were working in contaminated water,” tearing down and repairing washed-out homes.

Stop and think about that. You may resent undocumented immigrants for taking jobs away from Americans, but you can’t possibly think they deserve to be treated like they’re subhuman and expendable. And, anyway, shouldn’t we reserve our contempt for employers skirting the law by hiring cheap labor? Meyerson continues:

Last week, New Jersey Democratic Sen. Robert Menendez and California Reps. Judy Chu (D-Monterey Park) and George Miller (D-Martinez) introduced legislation (the POWER Act) that would give workers like Diaz provisional “U visas.” The visas were designed to provide temporary legal status to immigrant victims who come forward to report violent crimes, and the proposed legislation would expand the protection to those who come forward to report workplace violations. Such legislation, Menendez pointed out, would not only protect immigrants but keep unscrupulous employers from lowering labor standards generally.

The July/August issue of Mother Jones also takes on the issue the unfair working conditions. Take, for example, Martha’s story:

Of course, undocumented immigrants aren’t the only ones being squeezed for all they’re worth. The heart of Monika Bauerlein and Clara Jeffery’s Mother Jones article, “All Work and No Pay,” describes the culture of the new American workplace — one that places value on flashy buzzwords like  “productivity,” “multitasking” and “offloading,” all of which really mean working employees to the bone. And though people may be inclined to shrug off intense working conditions as a temporary phase during a down economy, they shouldn’t:

In all the chatter about our “jobless recovery,” how often does someone explain the simple feat by which this is actually accomplished? US productivity increased twice as fast in 2009 as it had in 2008, and twice as fast again in 2010: workforce down, output up, and voilá! No wonder corporate profits are up 22 percent since 2007, according to a new report by the Economic Policy Institute. To repeat: Up. Twenty-two. Percent.

If your blood isn’t boiling yet, these charts will do the trick.