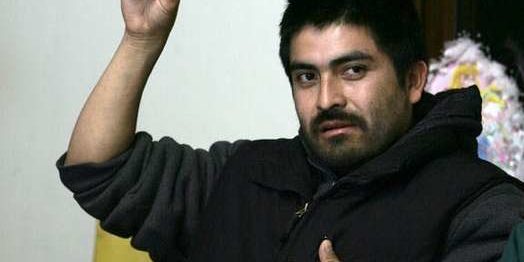 During a meeting Wednesday evening at the New Labor office in Lakewood, Samuel Alonso speaks about how day laborers are treated. #114780 – 2/9/11 – LAKEWOOD – ASBURY PARK PRESS PHOTO BY THOMAS P. COSTELLO

The Mexican native had lived in the United States no more than three weeks when he was hired to work for a Manalapan landscaper. For $8 an hour he cut grass, whacked weeds, even did a little welding.

At first, his boss paid him a couple hundred dollars for his work, he said. But soon, pay day would come around and there would be no money for Garcia.

Garcia, 40, of Lakewood, worked for the company about a month and a half. Gradually, his unpaid wages grew to around $1,000 — approximately 125 hours of free labor.

“I felt impotent. It made me feel that I couldn’t do anything,” Garcia said Wednesday.

Out many days’ pay, Garcia had to turn to his friends for financial help. He never tried to recover his lost wages, partially out of ignorance of his rights but also, he said, because he needed to focus on finding another job to pay off the expenses he had incurred.

Garcia’s story is all too common.

Talk to day laborers and their advocates around the state, and the stories come pouring out: The cook’s assistant who was forced to continue working with a swollen, bloody head after the chef hit him with a heavy pan. The landscaper who pretended to run over his workers for a laugh. The construction worker who lost an eye when his boss refused to take him to a for .

“There’s a lot of abuses going on,” said Carmen Salavarrieta, co-founder of the Plainfield-based Angels in Action, which often advocates on behalf of day laborers.

A recent survey by the Seton Hall University School of Law in Newark showed day laborers are victims of a wide range of employer abuses, including wage theft, not being provided proper safety gear and even assaults on the job. Such abuses, particularly wage theft, are by no means isolated to the day laborer community. But day laborers are especially vulnerable by nature of who they are. Many are undocumented immigrants who, because of their immigration status, ignorance of their rights, fear of authorities, and limited English proficiency, are easily exploited by unscrupulous employers, according to the Seton Hall report.

Even if they are aware of the legal recourse available to them, advocates say, abuse claims can be time-consuming to pursue and difficult to win.

One of the reasons wage theft among day laborers is so hard to track down is that often, workers don’t know the names of contractors and business owners.

“No one knows any one,” said Jorge Artiga, 47, of Morristown, a day laborer who belongs to the Wind of the Spirit, an immigrant resource center based in Morristown.

Wind of the Spirit receives an average of 15 wage-theft complaints every month, said co-founder Diana Mejia. The most common complaint Mejia hears is of employers who pay some, but not all, of the wages owed, always promising to pay the rest later. Workers stay on the job while the amount of their unpaid wages accumulates.

Both Mendez and Garcia were part of a group who spoke Wednesday evening at the Lakewood office of New Labor, an advocacy group for immigrant workers that also operates in New Brunswick.

The five men spoke of their experiences as day laborers, their stories translated from Spanish to English by New Labor volunteer Paulina Romo.

“You can only hope that you’ll be paid because if you’re not, it’s going to have an impact,” said Mendez, who has worked in construction and landscaping.

Going without pay can mean no money for food or rent. It can also mean, for those day laborers who immigrated here, tensions with those back home.

Mendez has four children living in Mexico. When he can, he sends money to them. But when the money is not forthcoming, problems arise.

“If they (employers) don’t pay us, the family thinks we’re making all this money and we’re not sending it,” said Mendez.

Of course, not all those who hire day laborers are looking to take advantage of them. Probably 90 percent of employers treat their workers well, said Rita Dentino, director of the group Casa Freehold.

“The problem is, that 10 percent can make really big problems,” said Dentino.

The New Jersey Landscape Contractors Association does not condone the hiring of day laborers, said Michael Kukol, chairman of the association’s legislative committee.

Kukol, who owns a landscaping company in Wyckoff, will not hire workers who cannot prove they can work in this country legally, and his fellow contractors are encouraged to do the same, he said.

But, he acknowledges, there are employers who are willing to exploit undocumented day laborers.

“They are easy picking,” said Kukol.

Bringing those employers to account is not always easy.

The Seton Hall study outlines a handful of avenues open to day laborers but notes that each comes with limitations.

The federal Department of Labor’s Wage and Hour Division has offered to help day laborers negotiate payments. It only has jurisdiction when employees are engaged in interstate commerce, however, while workers and community organizers say that most of the employers who hire day laborers are small, independent contractors involved in local projects.

The state Department of Labor, meanwhile, says it investigates every wage and hour complaint it receives. However, the agency does not have the resources necessary to handle the volume of complaints it receives.

New Jersey has a criminal statute for wage theft but, the Seton Hall report states, it is not a sufficient deterrent and is rarely used.

Finally, workers may file complaints in small claims court. But even when successful, it can be difficult for workers to actually recover any money if they do not have financial information about their employers — such as employers’ bank accounts or other assets — that can be used to file a lien.

Getting the money took another year and a half, however, after the landscaper claimed he had no way to pay the men. By that point, the men had already returned to Mexico, their home country, Dentino said.

When the official channels fail, advocates say, one tactic has been especially successful in getting employers to pay up: public embarrassment.

Mejia and her fellow advocates in Morristown have at times turned to the media to draw attention to worker abuses. They have tried to hurt contractors’ reputations by informing homeowners when they hire contractors who refuse to pay their employees. They have also staged protests of unscrupulous employers.

“It’s not a big protest, but we make sure they see us,” said Mejia.

Perhaps most important, whenever Mejia’s organization pursues a wage-theft complaint, the worker involved is required to attend classes educating them on their rights as employees.

The goal, Mejia said, is to ensure workers don’t land themselves in the same predicament again.

Workers need to know how they can combat these abuses, Samuel Alonso, 31, a laborer from Lakewood, said Wednesday.

“This about bosses that don’t pay is a plague,” Alonso said. “We have to fight it.”