Ruling due Tuesday in LAPD shooting that sparked protests, clashes 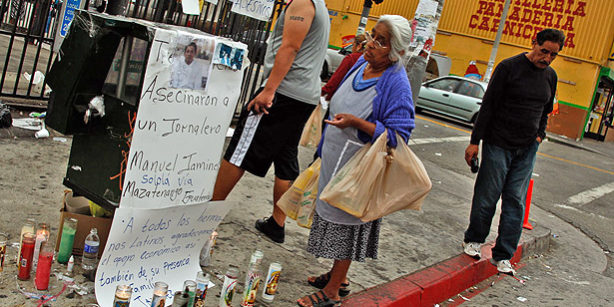 The Los Angeles Board of Police Commissioners on Tuesday is scheduled to announce its ruling on whether a fatal shooting of an immigrant day laborer by an LAPD officer was justified.

On a Sunday afternoon last September, Officer Frank Hernandez, who was assigned to a bicycle unit in the department’s Rampart Division, responded to a call for help at the corner of 6th Street and Union Avenue, in the heart of a densely populated Latino-immigrant neighborhood. On the sidewalk at the bustling intersection, Hernandez and two other officers found Manuel Jamines, a 37-year-old Guatemalan man.

Jamines, according to the Los Angeles Police Department’s account of the encounter, was armed with a knife, drunk and threatening passers-by.  Hernandez, police said, ordered Jamines in Spanish and English to drop the weapon and fired at him when the man made a sudden movement toward the officers.  A knife was recovered at the scene, police said.

Several eyewitnesses interviewed by investigators supported the officers’ account of the incident, according to police.  Some other witnesses, however, came forward to say they had not seen Jamines wielding a knife.

The shooting triggered a few days of protests and some rioting in the neighborhood, some of it instigated by anti-police groups that worked to stoke anger among the area’s residents.  Many protesters questioned why the officers hadn’t used a stun gun or some other non-lethal weapon to subdue Jamines. Their suspicion grew when it was learned that Hernandez had been involved in a controversial shooting once before. He was ultimately cleared of any wrongdoing in that case.

Hoping to calm the tensions that frayed after the shooting, LAPD Chief Charlie Beck promised to fast-track the department’s investigation and adjudication of the shooting, which typically would have taken about a year to complete.

Beck recently presented the commission, a civilian panel that oversees the department, with his final report on the shooting, which included his conclusion concerning whether Hernandez had been justified to use deadly force. Although Beck’s report is kept confidential until after the commission makes its ruling, if investigators concluded Jamines did in fact have a knife, it is all but certain that Beck would conclude the use of deadly force was justified.

The five-person commission will make a decision in closed session. It has announced plans for a 12:30 news conference to announce its findings.