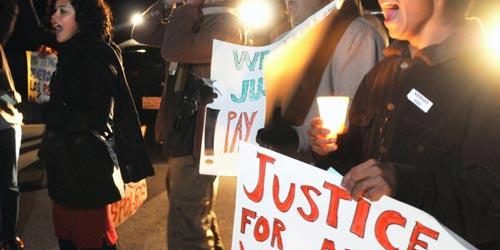 Niemann Properties, along with a subcontractor, is the target of an ongoing class-action lawsuit filed in May by more than 100 day laborers, who said they were never compensated for work done on a condominium project in Hollywood last year.

A day-laborer advocacy group has held protests at the project site, the Rolling Hills Estates company headquarters, and now at Niemann’s home.

“We want to make sure Mr. Niemann is reminded that over 100 families are not going to be able to share a nice meal at Christmastime due to his company not doing what’s right,” said Marco Amador, a spokesman for the National Day Laborer Organizing Network. “Maybe next time we’ll go to his church.”

Niemann said in a statement that the laborers should focus their frustration at Alpha Co., the subcontractor that allegedly failed to issue proper payment.

“The protesters are directing their anger in the wrong place and at the wrong people,” he said.