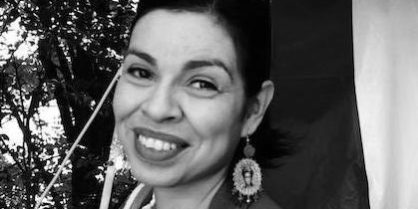 Los Angeles, CA — This week, The National Day Laborer Organizing Network (NDLON) announced that Xochi Flores, an LA based activist, popular educator and musician will be the national network’s first-ever Associate Director.  The announcement comes as NDLON expands its work to defend and advance migrant worker rights during a pivotal moment.

“Xochi comes from a long line of community organizers and activists. She has  participated in social justice work for at least 25 years and has been involved in numerous campaigns, community based projects and organizations.

“She has vast experience in team building, professional and project development, engaging activists, artists and the broader community and always envisions projects from start to finish. She is someone her community trusts and looks to for leadership. Xochi will play a critical role in enhancing the internal organization and infrastructure necessary to advance our work. We are very fortunate to have her be part of our national leadership and I am looking forward to working with her as we continue to improve the lives of Day Laborers across the country.”

At NDLON, Xochi successfully led the individual donor initiative for the last three years. She plays an integral role in developing and sustaining healthy relationships with NDLON’s donor base.  In 2014, she also spearheaded a project whereby community colleges partner with local worker centers to create curriculum relevant to the day laborer community, they offer these courses on site at worker centers. This project is now supported in part by the National Council on Workforce Education and has been highlighted by the National Skills Coalition.

Additionally, Xochi has booked several nationally recognized artists such as Chuck D, Ozomatli, Aloe Blacc, Ceci Bastida and Quetzal for NDLONs public concert series Chant Down the Walls. Xochi is currently leading a project to build popular education modules on Black and Brown History/Affinities along with Dr. Gaye Johnson, Dr. Roberto Flores and Dr. Chris Zepeda. These are set to launch in the fall of 2016.

Xochi is an experienced grant writer and has written dozens of grants for LA based artists, and organizations across the country. Prior to NDLON, Xochi worked with Proyecto Pastoral & Homeboy Industries where she played an integral role in the negotiation that took place for a land acquisition grant. Xochi also organized, sed funding and set in place a sustainable organizing model for the first Mujeres Unidas conference for women and young girls of Boyle Heights, a project that celebrated its 19th year last June.

“I am both excited and humbled to be the new Associate Director of NDLON. Our community is currently facing major obstacles and an unending set of challenges. I am looking forward to making solid contributions to the growth of the immigrants rights and workers movement across the country.”

“In my years as a community worker, artist and parent, I’ve learned how to establish and sustain meaningful relationships, to be a connector of the various communities I participate in and I’ve learned that every person has a story to tell. Through my work as a musician and writer, I strive towards the un-silencing of these stories by both listening to others and sharing mine.

NDLON as an organization is a vehicle that lifts the personal testimonies of Day Laborers and immigrants and creates the space for these communities to construct their own narratives and tell their own first person accounts.”

Xochi is an active member of the LA Chicano arts community. She co-founded the transnational dialogue between Chicana/os in Los Angeles and Jarocha/os in Veracruz in 2003, a project that has since taken root in every region of the US. She has played in Cambalache, a cornerstone US based Chicana/o Son Jarocho group, since 2009.