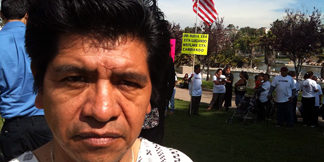 Victor Lopez is a Guatemalan community activist who says police have done a better job reaching out to his community in the wake of the shooting of a Guatemalan day laborer.

The commission concurred with the findings of Chief Charlie Beck and his investigators. Beck said six independent witnesses described an intoxicated Manuel Jamines waving a knife at passersby, then turning it toward police when they arrived.

“The vast preponderance of evidence supports that Mr. Jamines held a knife over his head in a stabbing position and rapidly moved toward the shooting officer, closing to within 12 feet prior to the shooting,” Beck said.

Several witnesses said Jamines, a day laborer who spoke only a Mayan dialect, had dropped the knife before the officer fired.

John Mack, who heads the five-member civilian police commission, told reporters that everyone who saw the incident didn’t see it the same way.

“Well there were some witnesses who were closer to the scene than others. Some were in a better position to observe whether or not there was a knife.”

An attorney for Jamines’ wife and three children, who reside in Guatemala, said a federal civil rights lawsuit will still go forward.

Reaction to the decision varied.

In MacArthur Park, Richard Larios of the group Community Control of Police said he believed Jamines had dropped his knife. Larios held a sign that said “Stop Killer Cops.”

“I feel that there’s nothing crazy about saying ‘Stop Killer Cops’… if there’s a rogue officer who’s going around shooting people in the community without just cause.”

Two Guatemalan activists stood nearby. Victory Lopez, who works as a court interpreter, wondered what an officer is supposed to do with an armed man.

“If I have one knife and I’m approaching to you, I think you need to do something,” Lopez said.

Daniel Morales, who arrived in the Westlake neighborhood from Guatemala two decades ago, wished that the officer had reacted differently.

“I don’t believe that the police officers need to shoot that guy to stop him,” Morales said. “I think there’s another method that he can use to stop that.”

A police commissioner said the department is considering whether to arm more officers with Tasers.

The chief has said it may have been difficult for an officer to use the device in the Jamines shooting.

Morales and others said that in the wake of the shooting, police and political leaders have done a better job of reaching out to the relatively isolated Guatemalan immigrants who live just a few miles from L.A. City Hall.

“We opened channels of communication directly with the police and with the Mayor’s Office and we want solutions,” he said.

But Morales added that many in the Guatemalan community agree that any response to the commission’s decision must be peaceful, unlike the days of violent protest that followed the shooting.