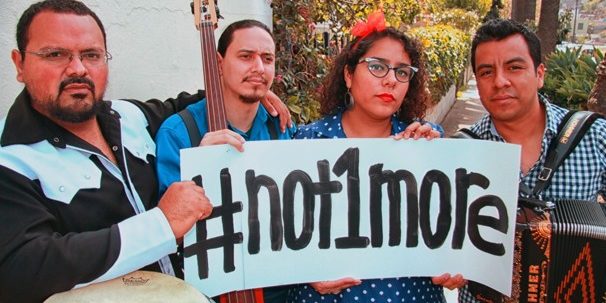 “I felt it was really, really important to put myself out there in order to inspire other people,” Carlos says. “We’re not afraid anymore.”

Their stories, in turn, have become the stuff of mainstream movies — including “Under the Same Moon” (2007) and the Oscar-nominated “A Better Life” (2011) — and grist for an expanding musical playlist. Undoc pop still is often delivered in Spanish — by such troubadors as Los Tigres del Norte and alt-rappers Calle 13. But not always — witness pieces by Lila Downs, Rage Against the Machine and Washington-based Emma’s Revolution.

Scarcely a month ago, La Santa Cecilia — formed five years ago and named for the patron saint of musicians — released the single “El Hielo,” or “Ice.” The title is a bilingual pun on the initials of Immigration and Customs Enforcement.

Set to a bouncy bossa nova groove, the lyrics in Spanish sketch the stories of three hardworking undocumented characters who fear deportation and separation from their families because, Hernandez croons in the chorus, “ICE is loose out on the streets.”

This week the band followed with an unusually crafted music video for the song by film director Alex Rivera. It was viewed 15,000 times in the first 24 hours. Rivera, whose 2008 science fiction drama “Sleep Dealer” also addressed immigration, cast undocumented immigrants in nearly every role in “El Hielo.”

It’s just a four-minute song, but with multiple back-stories of performance and performers, the song and video crystalize the controversy of the moment. At the band’s scheduled performance of “El Hielo” on the Capitol grounds Wednesday, the coy and clandestine dance of art and life within this crusade will come into public focus in a way that might not have been possible a few years ago.

“I think it shows the maturity and the complexity of the movement, that we’re able to make these cultural expressions together,” Rivera says.

The rally, which will highlight stories of undocumented immigrants, will feature a variety of entertainers, politicians and movement leaders, organized by groups including CASA of Maryland and the Service Employees International Union.

For Carlos, the risk of going public diminished when he qualified for “deferred action” recently, the Obama administration program that allows those who came here as youngsters to be shielded from deportation. But it still feels like a dramatic step, Carlos says, because deferred action is no guarantee of permanent legal status, and there’s no returning now to the shadows.

When Carlos and his band mates sat down to create “El Hielo” with co-writer Claudia Brant, they wanted to tell stories like his and that of singer Hernandez’s mother, who crossed the border without papers before later obtaining legal status. She is the “Eva” in the first verse who cleans houses and fears her boss will report her as illegal if she fails in her job.

“This is our story, and this is the story of a lot of people,” Hernandez says.

The lyrical sketches reminded Pablo Alvarado of day laborers he knows in Los Angeles. As executive director of the National Day Laborer Organizing Network, he committed to producing the video because the song dovetailed with his group’s anti-deportation campaign. Only when undocumented immigrants are reflected in the cultural space will the abiding stigma fade, Alvarado says.

Several of the actors are minor celebrities in the movent. There’s Katherine Figueroa, a citizen who four years ago, when she was 9, described seeing news footage of her father being arrested during a workplace raid in Arizona that also swept up her mother.

And Erika Andiola, co-founder of the DREAM Action Coalition in Arizona, who was brought to the States illegally as a child. In January, ICE detained her mother. Erika posted a tearful video that night that got 78,000 views.

The “El Hielo” video shows the characters getting ready for work. The twist is that a character played by Immigrant Youth Coalition organizer Isaac Barrera turns out to be going to work for ICE.

Andiola’s character is caught by Barrera’s team in a raid on a restaurant. Her character’s mother — played by her real mother, now released from detention — and her character’s daughter, played by Katherine Figueroa, hug each other while watching the footage on television.

“We’re so unafraid of this machine that we can re-create it and talk about it in our own terms,” Rivera says. “And that notion of being unafraid, I think, has been the core of the undocumented movement.”

Just like Carlos, squeezing out his wistful accordion solo, in the sun on the Capitol lawn.