In Midst of Pandemic, Frontline Workers Share Testimonies of Loss and Retaliation

In Midst of Pandemic, Frontline Workers Share Testimonies of Loss and Retaliation

“Enough is enough, we need to raise our voices. President Biden can do something about it”

Chelsea, MA – On Wednesday, frontline workers from Massachusetts and Connecticut came together (with safe physical distancing) to sound the alarm about how the threat of ICE and deportation have created a crisis for workers – and what the incoming Biden administration can do about it. Workers shared testimonies of how employers have used the threat of deportation to retaliate and punish them when they have spoken out about unsafe work conditions, about fear of becoming sick from covid19, or about cases of wage theft.

Chelsea Collaborative Director of Organizing Yessenia Alfaro spoke about the tragic case of Aviud Gomez, a day laborer in Massachusetts who was threatened with deportation for denouncing his own wages had been stolen. He was targeted, detained and deported by ICE to Mexico, where he was murdered. It’s a tragic end that, according to Alfaro, could have been prevented if workers could count on protections when they speak out about workplace conditions or abuse.

Aviud Gomez’s case is tragic, and emblematic of the vulnerability faced by workers. In Massachusetts and Connecticut, the looming threat of deportation becomes all the more significant in the pandemic – as immigrant workers are disproportionately getting sick and dying. In communities devastated by the pandemic, such as Chelsea, workers are threatened if they speak out about abuse or unsafe working conditions.

“Workers know that when we speak out, we face retaliation. They have always robbed from us, our wages, our money. But enough is enough, we need to raise our voices. President Biden can do something about it,” shared Maria Ramirez, of New Haven-based ULA Connecticut, one of over a dozen workers that drove several hours to join fellow workers in Massachusetts.

The organizations and workers- affiliated with the National Day Laborer Organizing Network (NDLON) – pointed to the authority within the executive branch to address the crisis faced by workers.

“As long as ICE can be weaponized against workers, we will see the most unconscionable and rampant exploitation of day laborers, domestic workers, street vendors, factory and delivery workers. Whistleblower protections for workers eliminates that threat for workers to address the abuses they face nationwide- and that’s good for all workers,” said NDLON’s Salvador G Sarmiento.

In Massachusetts alone, nearly 50 thousands cases of wage theft, and the wholesale exclusion of undocumented workers and their families from covid stimulus aid illustrate the widespread crisis confronting immigrant workers in the region.

In his first 5 days, President Biden issued an Executive Order directing OSHA to take immediate steps to protect workers from COVID, increasing enforcement and labor standards. Yet, as workers testified today, the reality for millions of undocumented workers is that absent “whistleblower” type protections, speaking out about any labor violation results in retaliation and worse.

Workers are available for interviews. Program was live-streamed online at ULA CT Facebook, and updates at #TrabajoSiMigraNo. 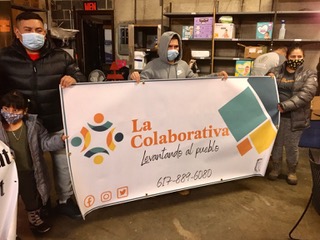