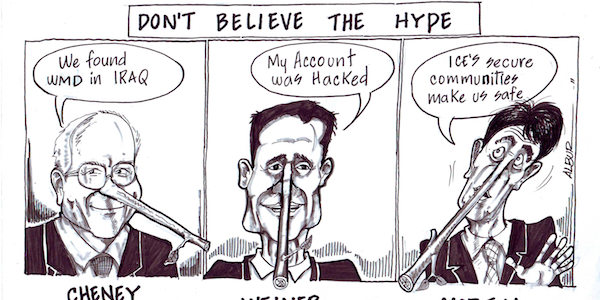 This cartoon, “Don’t Believe the Hype,” came on the heels of the ICE’s report crediting the Se Communities program with aiding a ‘record number of deportations.’

In fiscal year 2011, the Obama administration has deported 396,000+ people and performed enough of a shell game with them to say that 55% of those are “convicted criminals.” We see through ICE’s scare tactics and fuzzy math and know that their entire classification of “criminality” is skewed.

In response to ICE’s new numbers, we offer this cartoon designed by Alfredo Burgos, “Don’t Believe the Hype.”