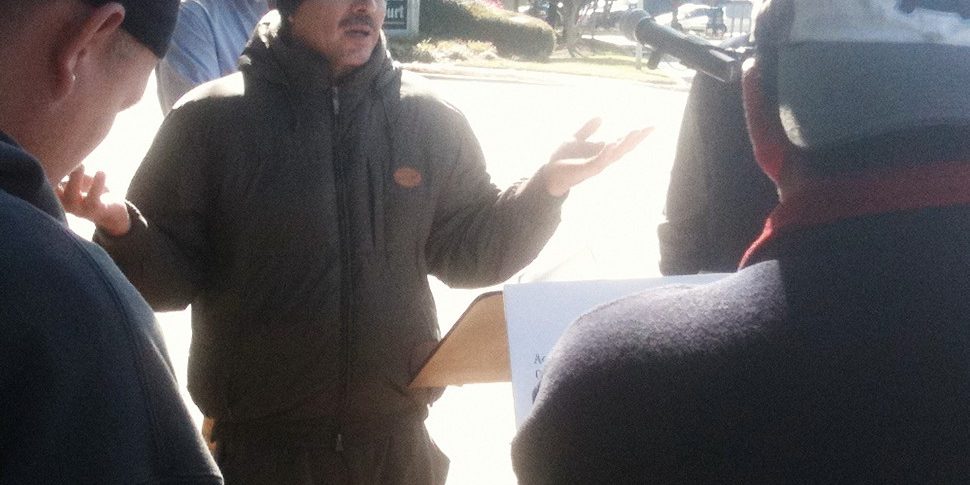 Three dozen Carrboro community members, including social justice activists, day laborers and elected officials, assembled in solidarity at the corner of Davie and Jones Ferry roads Tuesday morning and called for an end to the town’s anti-lingering ordinance.

The controversial local law, which passed in 2007, forbids anyone from standing, sitting, reclining, lingering or otherwise remaining on that corner after 11 a.m. Day laborers often assemble on that corner trying to find work.

Supporters of the ordinance say it’s needed to address a few people, many of whom aren’t looking for work, who allegedly drink and cause public disturbances on the corner.

On some days as many as 60 day laborers, many of them Latinos who live across the street at Abbey Court apartments, await trucks coming to pick them up for a shift.

Angel Martinez, one of two day laborers who spoke through a translator said he relies on the corner “to live a better life.”

“This is one of the only venues where we can provide for our families,” he said, adding that many who want the ordinance abolished did not attend the event for fear of retribution. “Once we are asked to leave, there’s nowhere else we can go.”

Chris Brook, staff attorney for the Southern Coalition for Social Justice, which is challenging the constitutionality of the ordinance, read a petition signed by 112 residents. Among the signatures are representatives from the Human Rights Center of Chapel Hill and Carrboro, the Orange County Democratic Party, the Chapel Hill-Carrboro branch of the NAACP, local business owners, former Board of Aldermen members and candidates.

The document, which was hand delivered to Town Hall after the press conference, calls for immediate repeal of the ordinance.

“The ordinance violates the civil and human rights of any person who would otherwise lawfully be present at the intersection,” the petition reads.

“Targeting a single ethnic group in such a fashion shows a level of insensitivity not expected in our town.”

Supporters argued Tuesday that the focus at Davie and Jones Ferry roads should not be on the workers, but rather on those who offer them work. They pointed to examples where laborers were not paid, or paid with bad checks.

“These individuals are often assigned to perform dangerous jobs that are generally rejected by workers with more options,” said Rafael Gallegos, associate director of the Human Rights Center of Chapel Hill and Carrboro.

“As a result day laborers face higher instances of workplace injuries. In addition to these precarious work conditions that they face on a daily basis, day laborers are exposed to the negative aspects of our current economic conditions which include unimaginable hardships for their families.”

The Rev. Robert Campbell, president of the local NAACP, called on the community to stand up to the Board of Alderman and seek immediate change.

“This is one of the most unjust laws there is,” Campbell said. “If we look at it with a clean heart, it oppresses and it allows day laborers to be robbed. … This law enforces poverty when it denies a worker an opportunity to employment.”

Alderman Dan Coleman, who has long opposed the ordinance and called it “discriminatory,” attended the event.

“This is an injustice that the Board of Alderman has the power to correct,” he said.

Though the board expects to discuss the ordinance next month, the best chance for rescinding the ordinance will come after the Nov. 8 election.

All four candidates running for three seats have stated they oppose the ordinance, as has Alderman Sammy Slade. Joal Hall Broun, who will leave office after this term, supports the ordinance. Mayor Mark Chilton and Aldermen Jacquelyn Gist and Randee Haven-O’Donnell also all voted to enact the ordinance in 2007.

That means once the new group is sworn in, the board would split 4-3 against the ordinance.

That said, Coleman noted that the town received a report from the police department last month that noted a decrease in calls to the corner since the ordinance was implemented. Still, a drop in calls could be due to an increase in patrols, he said.

“Neighbors feel like the ordinance has had a positive impact on their experience living in this neighborhood,” Coleman said. “My goal is to rescind the ordinance and put in place some mechanism that will provide a level of comfort and insure a quality of life for people living in the neighborhood both in Abbey Court and going across up Davie Road.”

One neighbor to the site, Chris Kreutzer, said after the press conference that though the ordinance is imperfect, it is needed.

“The community in favor of this law, nobody likes it, nobody thinks it’s great, but I’ve yet to hear a creative solution that works for both sides,” he said.

The press conference occurred at 11 a.m. to intentionally violate the ordinance.

Speakers stood adjacent to a sign that read, “According to Town of Carrboro Ordinance No. 10 of 2007-08 Town Code Section 5-20 … This gathering is illegal. According to the U.S. Constitution it is perfectly fine.”

“We want to exercise (the right to free speech) on this corner where it’s technically forbidden to do so,” Brook said. “Our 1st Amendment rights are allowed to go through, but day laborers’s rights are being infringed upon every day.”

Coleman said his understanding from the town attorney that the press conference was not illegal, but staying around afterward would be a crime.

Added Elizabeth Haddix, staff attorney at UNC’s Center for Civil Rights, “If all of us white people leave here and all the brown and black people stay here, I can guarantee you that the police cars are going to come and pick everybody off the curb.”

“To suggest that this ordinance is consistent with the Constitution and Carrboro’s otherwise progressive reputation is the height of hypocrisy,” Haddix said. “To suggest that this is the best we can do to address the needs of the community is a failure of political will.”