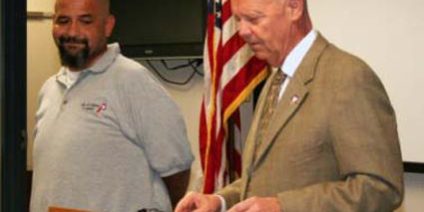 When Adrian Magallanes was named 2011 City of Plano Employee of the Year last month, he thought it was very nice.

But he had no idea of the attention he was about to receive. First, he and 11 other nominees were honored at a private reception in April. Then special recognition was given to him at a Rotary Club meeting last week. Then lastly, he was introduced at a regular meeting of the Plano City Council Monday night.

“It has really been humbling,” he said in a phone interview Wednesday morning. “It inspires me to do more, and I think it also inspires others.”

Magallanes joined the Plano City Planning Department in June 2007. As the supervisor for the city’s Day Labor Center, he helped coordinate recent improvements to the center while continuing to supervise regular operations.

“Throughout the construction process, Adrian communicated with laborers who were temporarily displaced due to construction on the facility during the hottest months of the summer,” said Christine Day, his supervisor. “He posted plans on-site so the laborers could see the changes that were taking place. He brought coolers and water, and modified processes whenever possible to ensure the laborers stayed safe in the heat.”

“In a relatively short time, Adrian has made a huge difference for the laborers and customers we serve through our Day Labor Center,” Glasscock said.

Magallanes said one of his proudest moments was at the Rotary Club meeting.

“I’m really glad my wife Marivel was there,” he laughed. “She would never have believed all of the good things they said about me.”