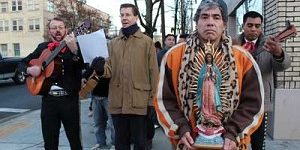 In the corner of a former Northeast Portland garage, day laborers on Dec. 12 lovingly pieced together a shrine with a two-foot-tall statue of Our Lady of Guadalupe. One worker with rough hands gently slipped a rose into a soda bottle and placed the flower beside the image, one of the most important symbols in Latin American Catholicism.

“It’s a very special day. It’s like my heart,” 29-year-old Marcos Alvares said through a translator.

A native of Michoacan, Alvares recalls celebrating the Dec. 12 feast of Our Lady of Guadalupe as a boy — songs in a splendid church at midnight, steaming cups of cocoa and trays full of sweets. On this Guadalupe day, 17 years after he came to the U.S., he’s happy to huddle for warmth with other men hoping to be hired for manual labor.

Laborers sing as they march past a neighborhood store in Northeast Portland.

Alvares, a member of St. Anne Parish in Gresham, once owned a small construction company. He would drive to this same tidy little garage — the VOZ Worker Center — to pick up laborers. After the crash of the economy and the failure of his business, Alvares himself is in need of work.

More than a dozen workers braved raw cold in the early morning Dec. 12 and processed for a mile with the statue, singing traditional songs in honor of Mary. On busy Martin Luther King, Jr. Blvd., curious motorists stared. One pedestrian, a young woman in a long wool coat, stopped and smiled as the men streamed past.

At Southeast 6th and Ankeny, a corner where laborers once waited for jobs before the center opened a few blocks away in 2008, the men waved to bicyclists and wished the riders “Buenos Dias.” The marchers invited a group at a nearby bus stop to join in the walk and return to the VOZ Worker Center for Mass and a plate of tamales.

One of the walkers was Angel Bueno, 40. He comes to the center every day and sometimes is hired. On other days, he waits in vain until sundown. On those bad days, he says, he prays to Our Lady of Guadalupe for comfort and aid.

“Since I was a child, I’ve believed Our Lady of Guadalupe is very special,” says the mustached Bueno, a hood pulled over his baseball cap. “She helps me in my daily life.”

On occasion, groups of men would slip away from the singing to meet an arriving truck, an employer in need of help. Those left behind waved to their friends and wished them luck, all the while praying their number would come up soon.

VOZ is funded in part by the Catholic Campaign for Human Development, which parishioners support with a collection each November. A committee of laborers helps lead the center, located in a small lot on the corner of Northeast MLK and Everett.

Matt Cato, director of the Archdiocese of Portland’s Office of Life, Justice and Peace, marched and sang with the workers in the morning frost. Cato is aware that city officials have extended the Worker Center lease, but that VOZ organizers would prefer more stability.

“The hope is to convince the city to give them permanence here,” Cato says.