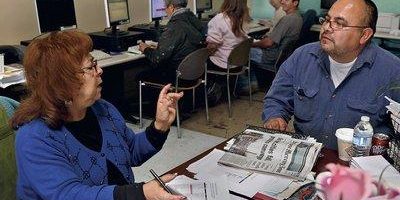 Silicon Valley’s first hiring center for day workers might be forced to downsize or close at the end of the year, another victim of hard times that stretch from the streets to San Jose City Hall.

“I don’t know what I’d do,” Francisco Sanchez said recently at the Day Worker Center just east of downtown. The 58-year-old Mexican immigrant and “jornalero,” or day laborer, didn’t get a job that day, but he did get a free haircut, one of the many social services the center offers.

“I don’t want to join the guys standing in front of Home Depot,” Sanchez said. “I used to do that when I was young, but I’m not young anymore and the jobs don’t come as easy as they did.”

After the Great Recession, housing bust and financial crisis, the steady stream of contractors and homeowners who needed temporary help in flush times slowed to a trickle.

Directer Mary Mendez, left, talks with Martin Martinez, 52, an out of work dry waller who once made $54 an hour and now registers for day work at the Day Worker Center in San Jose, on Wednesday, Nov. 16, 2011. In the background are some of the computers available for job search. The first day-worker hiring center in Silicon Valley may fall victim to San Jose’s budget crisis. Started by a Catholic nun in East San Jose at the peak of anti-immigrant hysteria in California 18 years ago, the center, now located closer to downtown, on Story Rd., is scrambling for the $100,000 it needs to operate next year. (Karen T. Borchers/Mercury News) ( KAREN T. BORCHERS )

So did the grants, city subsidies or philanthropic donations that kept the hiring center humming for most of its 18 years. Its last, big funding source–a three-year, $300,000 grant from Home Depot funneled through the city–runs out Dec. 31. The nonprofit Center for Training and Careers, which took over the hiring center three years ago, knew the grant would expire but had expected to replace it by now.

“With the competition out there, it’s really tough,” said Lori Ramos a vice president and grants writer at CTC.

Councilwoman Madison Nguyen, who represents much of the East Side, said the city can’t afford to rescue struggling nonprofits anymore. Instead, she’s asking a private foundation to come to the rescue of the center.”Everybody needs money at this time, every nonprofit in the city,” she said. “Obviously, it’s a very unique center. We’re trying to save as many jobs as we can. They are part-time jobs, but they’re still jobs.”

The Day Worker Center and similar ones in Mountain View and Hayward were always more than just hiring halls. In 1993, California politics boiled over with Proposition 187, the “Save Our State” ballot initiative that called for draconian measures to detect, round up and deport undocumented immigrants. The measure passed a year later but eventually was ruled unconstitutional.

Sister Mary Peter McCusker, a Roman Catholic nun working in East San Jose at the time, came up with the idea of opening a hiring center. It would get jornaleros off the streets, match their skills with the needs of reputable contractors and homeowners, guarantee a day’s pay for a day’s work, and offer free English lessons, health screenings, hot meals and more.

Her first hiring center opened at the Tropicana ping center in East San Jose. After a few years, the St. Vincent De Paul Society agreed to operate the center and moved it to the Catholic organization’s office and warehouse complex near Coyote Creek and Story Road.

With the help of city subsidies, St. Vincent added computers for job searches, showers and laundry washing machines. Enrollment grew. However, St. Vincent decided to give up the entire complex and sold it in 2008 to the Center for Training and Careers.

Barring an 11th-hour rescue, the Center for Training and Careers will downsize its operations and move to a sparse classroom next door, or shut it down entirely. In either case, Mary Mendez, who is 66 and has led the center for 18 years, would be out of a job.

“Personally, it would be a big loss for me,” she said. “But don’t worry, I’m of retirement age. I can find something part time. I worry about the workers.”

Irene Macias, born and raised in Silicon Valley, is one of the newcomers. Widowed only last year, the 49-year-old mother of two young children comes in regularly to look for jobs cleaning houses or grooming pets. The family lives in a recreational vehicle.

“It would be really hard if they close the center,” Macias said. “If we lost it, I’d just have to do it on my own.”

Ruben Rodriguez, 53, is one of the old-timers. Born and raised in San Jose, he thought back wistfully to the best job he ever had, assembling mainframe computers for IBM.

“That was a great job out of high school,” he said. “I’ve had some good ones, but things happen.”

He arrived at the center 11 years ago after his last steady job ended. Rodriguez lives in his van and gets by with the moving and plumbing jobs he gets through the center.

“Right now it’s very difficult,” he said. “This place has been good for me. I’d hate to see it go.”