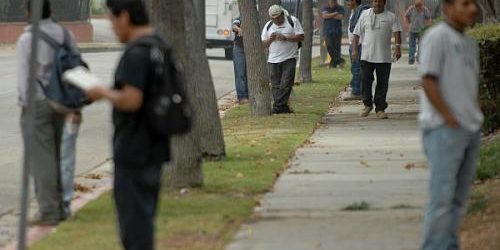 Day laborers hang out on Harvard Street west of San Fernando Road outside the Home Depot in Glendale on July 20, 2011. A day-labor center at the location has been closed due to budget cuts. (John McCoy/Staff Photographer)

The day-labor center built alongside the railroad tracks on San Fernando Road in Glendale was a modest structure, where vines of honeysuckle dangled over a fence and men and women gathered daily.

There was a restroom and picnic tables and nice people who came by and taught English or offered basic medical care.

For Miguel Nunez and the nearly 100 other day laborers and housekeepers who frequented the site each morning, the center meant protection from exploitive employers.

It also meant the crowds of day laborers stayed away from Home Depot and other unofficial gathering spots that often disturbed customers and neighbors.

Miguel Nunez hangs out near the parking lot at Home Depot at the intersection of Harvard Street and San Fernando Road in Glendale on July 20, 2011. The Temporary Skilled Worker Center accross the street has been closed due to budget cuts. (John McCoy/Staff Photographer)

But the center closed last month, one of several Los Angeles area sites that have shut down recently because of the bad economy.Now, Nunez and dozens of other day laborers wait outside the Home Depot – across the street from the shuttered center – hoping to be paid fair wages for the manual work they’re hired to do.

“Sometimes, they just don’t pay at all,” he said.

Opened in 1997 in response to complaints about day laborers lingering on corners or running toward construction trucks, the Glendale labor center was regarded as one of the nation’s most innovative. Officials came from as far as New York and New Jersey to see how it worked.

In its first few years, it was funded by Community Development Block Grants and federal funds, then later by the city of Glendale. It closed on June 30, one of three shut down recently in Los Angeles.

“The whole purpose of the day laborer site was so we could improve the quality of life in the area,” said Glendale city spokesman Tom Lorenz.

But some of those funding streams began to dwindle and others were diverted to different programs. At the same time, labor organizations filed a lawsuit against a Glendale ordinance that prohibited anyone from soliciting a job near a business.

The ordinance was eventually struck down in 2006 and many men began going back to the corners to seek jobs, Lorenz said.

In the meantime, the city of Glendale paid nearly $90,000 year to keep the site open but decided last month it could not afford it anymore.

“The center suffered the consequences of those (federal) cuts” and the lawsuit, Lorenz said.

“During a budget crisis, it comes down to dollars and cents.”

A spokesman for Home Depot said the company respects Glendale’s decisions. Officially, Home Depot does not allow day laborers to solicit work on company property, but it cannot prevent the laborers from gathering on the public sidewalk nearby.

“Regardless of the closure, we maintain a nonsolicitation policy at our stores. As for other closings, we’re not aware of any other center closings (other than Glendale), and we really feel it’s a decision for the city leaders,” said Steve Holmes, a corporate spokesman for Home Depot.

While day-laborer rights groups hesitate to call the closures a trend, they remain troubled.

“As you see unemployment rise you see more people entering an unconventional job market and then you see more unscrupulous employers trying to take advantage of people’s circumstances,” said B. Loewe, a spokesman for the National Organizing Day Laborer Network, one of the organizations that fought Glendale’s nonsolicitation ordinance.

“The more people looking for work, the more abuse is likely to occur, which makes worker centers more important than most think,” Loewe said.

The closing of local centers doesn’t seem to be a national trend, he said. Across the nation, centers are opening in Connecticut, Virginia and North Carolina.

“They realize it’s because of the crucial role (the centers) are playing,” Loewe said.

Others believe that communities and police departments can work together to maintain formal areas where day laborers could gather.

“The police can be a very strong partner in building free, open zones,” said Jorge-Mario Cabrera, spokesman for the Coalition for Humane Immigrant Rights of Los Angeles.

“These centers offer education opportunities, food, medical services and a basic level of protection. Physical abuse, sexual abuse or not being paid, day laborers have always been victims of those abuses, but being at the center allows for certain levels of respect and accountability.”

But even centers that have that community support are struggling.

“The economy has affected us, too,” said Oscar Mondragon, director of the operations for the Malibu Community Labor Exchange, which opened in 1993.

“A month ago, we were looking at shutting it down,” Mondragon said.

Thanks to fundraisers, the center will remain open for now. But times are tough, Mondragon said, even in Malibu.

Moeed Khan, regional director for Catholic Charities of Los Angeles, said he was uncertain if the Glendale center will reopen.

It comes down to who will step up to help with funding the site so that basic utilities can be paid.

“I was very proud of the center,” Khan said. “I’m sad that it closed. It is a reflection of the times.”

Nunez, the man who waited on Wednesday morning outside Home Depot for a job, said since the recession, he now works three days a week instead of six.

He said he hopes the city reconsiders its funding.

“I have faith it will open again,” he said. “These bad times can’t last forever.”