Centers Help Day Laborers Get a Hand and Get Paid 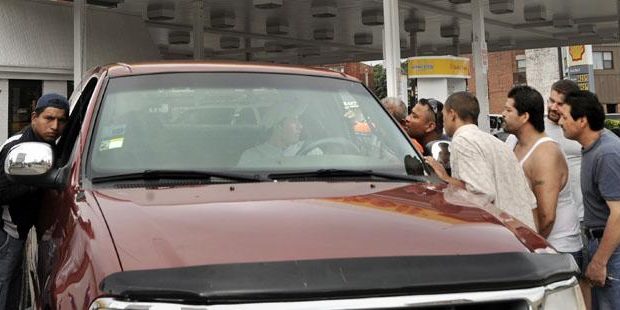 Day laborers talk with a potential employer at a gas station at Belmont and Milwaukee avenues at 8 a.m., July 25, 2011. Image Credit: Paul Beaty

Every morning, rain or shine, Miguel used to head for the corner of Belmont and Milwaukee avenues and wait at an informal gathering spot of day laborers near a BP gas station in hopes he would be hired to set tile, pour concrete or lay sod.After the job, sometimes he would be paid as promised but often he was not–a daily risk for the thousands of workers like Miguel who are hired off street corners by contractors or homeowners who need help with construction or landscaping.Today Miguel, 48, still makes a living doing temporary construction work. But instead of braving cold temperatures or stifling heat at a busy intersection, he meets employers at a storefront office of the Albany Park Workers Center at Bryn Mawr and Kimball avenues.

He starts each job with a contract spelling out his pay and working conditions that a lawyer at the center will help him enforce, if necessary.

“Here we have a roof over our head, we have coffee,” said Miguel who moved to Chicago from Mexico 16 years ago. “And a contract is signed so we know we will get paid.” Workers’ last names are withheld in this article because some are undocumented immigrants.

The Albany Park Workers Center is one of about 40 throughout the nation set up in an effort to reform the day labor industry. The center, which opened in 2004, was founded and is run by the Latino Union, a group created in 2000 by immigrant women working at temporary staffing agencies that grew into a larger workers rights and immigrants rights non-profit organization.

Some local business owners and residents oppose the workers centers, arguing they facilitate the hiring of people in the U.S. illegally and encourage illegal immigration. Laborers gathering on street corners also have caused local controversies, with some neighbors complaining they block traffic and sometimes make women passersby feel uncomfortable.

Without a workers center, undocumented laborers can be vulnerable to unscrupulous employers. A 2006 study by the University of Illinois at Chicago and the University of California Los Angeles found that two thirds of day laborers surveyed in the Midwest, including Chicago, had not been paid wages due them in the past two months, and 27 percent had been threatened with violence by employers.

Nationally, almost half of the day laborers told researchers they had been denied food or water breaks and the vast majority reported being hurt on the job or left at faraway work sites without transportation home.

The Latino Union set up the storefront office in Albany Park to combat the abuses and convince day laborers at street corners around the city to get jobs through workers centers instead of on their own.

Eric Rodriguez, the Latino Union’s executive director, said most street corners have informal networks and leaders who typically agree on a base wage. At the corner of Milwaukee and Belmont, for example, he said it’s $12 an hour, higher than the $8.25 an hour Illinois minimum wage.

But he said it is difficult to enforce the agreements when someone drives up looking for workers and is surrounded by men jockeying for a job.

At a workers center, there’s little jostling or bargaining for work. The center’s staff doesn’t ask day laborers about their immigration status, although it is widely understood that many are undocumented. Patricio Ordonez, a former day laborer turned Albany Park job coordinator, uses a lottery system to assign men to jobs and then negotiates their contract.

“The current broken immigration laws give predatory employers an advantage,” said Chris Newman, legal director for the National Day Laborer Organizing Network. Mr. Newman said undocumented immigrants are reluctant to speak up if employers abuse them, but workers centers and their lawyers are not.

Mr. Rodriguez often visits other street corners and passes out pamphlets on workers rights and safety. At the Albany Park center, day laborers can take advantage of English language classes and free works on construction skills such as plumbing and other topics. The center also hosts barbecues and soccer tournaments where workers from different street corners compete and then talk about improving working conditions for day laborers.

As it has for other occupations, the poor economy is hurting day laborers, who face increased competition for jobs, Mr. Rodriguez said.

And the anti-immigrant sentiment that often intensifies in hard economic times is evident in legislation being considered in the United States Congress. Representative Lamar Smith, Republican of Texas, has introduced a bill that would force workers centers to close or greatly alter their practices. The proposed Legal Workforce Act would mandate that all employers, including workers centers, use the government’s E-Verify electronic system to validate employees’ Social Security numbers.

Most legislative experts don’t expect the bill to become law, as it probably would not pass the Senate.

In assessing the intended impact of the bill, Tyler Moran, policy director for the National Immigration Law Center, said she didn’t think it would accomplish its goal of forcing day laborers to return to their native lands. “For the day laborers who are undocumented,” Ms. Moran said, “it’s not going to send them back home. It’s just going to move them from on-the-books to off-the-books.”

In other words, back to a street corner.