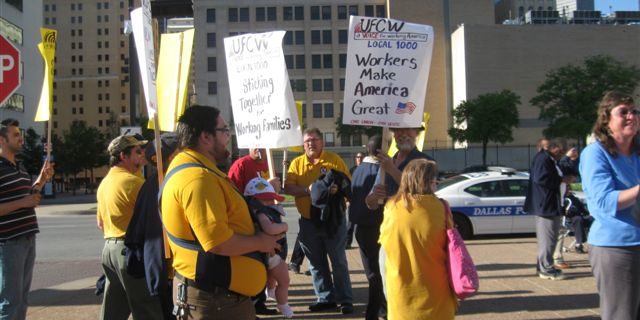 James Fortenberry, with the United Labor Union, Local 100, says Dallas sanitation workers make just above minimum wage and have no benefits. He says that’s not adequate to support one person, much less a family.

Mary Nix, head of Dallas Sanitation, says the city has used contract “day” labor on the back of garbage trucks for more than a decade. The only requirement is that the contractor meet or exceed the federal minimum wage.

Nix: We are paying the contractor 9.72 cents an hour, which includes that employee’s pay plus the overhead on worker’s comp.

Nix says contracting out garbage pickup helps keeps sanitation fees low. But she says there’s another reason the city council has been reluctant to require pay raises in the contract with AllTemps1. She says it’s difficult to raise contract day labor pay when full time employees at the city are taking pay cuts.

Nix: It’s very difficult to find a way to trim the cost of the budget for permanent employees who taken cuts over the last two years, and look at the day laborers who their federal wages have been increasing over the past three years.

But City Council member Angela Hunt says paying sanitation workers a “living wage” is the right thing to do.

Hunt: The amount that we’d have to increase the sanitation fee by is very minimal to make up for the cost of paying these guys what we should be paying them for the hard work that they do for the citizens of Dallas.

Peter Johnson says Dallas is the only major city whose sanitation workers are at minimum wage levels and have no benefits. Council member Hunt says maybe that will change with a new Mayor who’ll take office in June – as work begins on next year’s budget.