By keeping his promise to sign the TRUST Act into law, Governor Jerry Brown has made California safer for all its residents and a leader for immigration reform for the rest of the nation. The compromise bill sets a bare minimum floor of protections that prevents many immigrants from being pulled into the federal government’s dragnet and recognizes the rightful place of undocumented Californians in our communities.

The TRUST Act rejects the cloud of suspicion that the Obama Administration has cast over immigrant communities and sets the immigration debate in the right direction.  More cities and states should seek proactive policies within their constitutional authority that facilitate the inclusion and recognize the rights of undocumented residents.”

The TRUST Act ensures that California law enforcement will not submit to requests by ICE to hold people who have been charged with or convicted of only minor crimes for extra time in order to facilitate their transfer to immigration. The bill is a response to the overly common experience of an interaction with law enforcement resulting in deportation, which sent a chilling effect throughout California communities and endangered public safety by making people afraid to call the police.  A recent study showed that 40% of Latinos in Los Angeles were less likely to call police even when victim of a crime due to the police’s perceived involvement in immigration.

Under the new policy, California will no longer blindly comply with every immigration hold request from ICE. Instead, California officials will only detain a person for immigration if that person:

1.  Has been convicted of an enumerated felony, including any felony categorized under California law as “serious or violent,” any felony punishable with a state prison term, and additional specifically listed felonies;

2.  Has been convicted within the past five years of a misdemeanor for a “wobbler” crime that could have been charged as a felony;

3.  Is currently charged with an enumerated felony, including any felony categorized under California law as “serious or violent,” any felony punishable with a state prison term, and additional specifically listed felonies, and a magistrate judge has determined after a hearing that there is probable cause to support the felony charge;

4. Is currently registered in the California Sex and Arson Registry;

The California TRUST Act creates a floor, not a ceiling.  Localities within the state are free to place additional limits on compliance with ICE holds in order to protect the safety and civil rights of their residents. 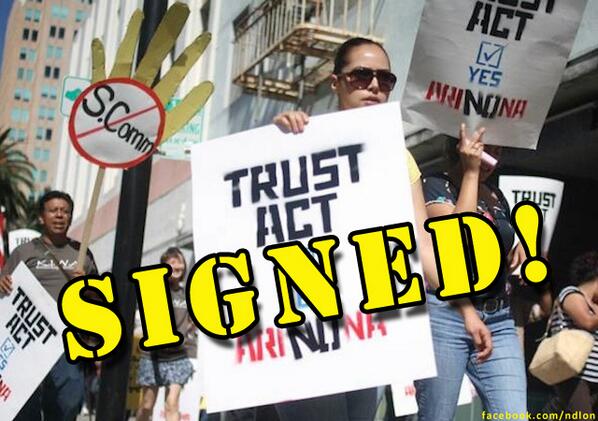