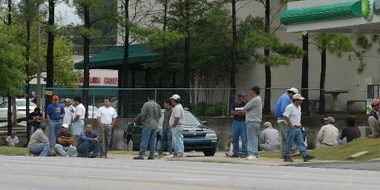 Benjamin Parra is grateful for his maintenance job at a fast-food restaurant in Hoover.

He knows he’s lucky, he said, because many other Hispanic immigrants are finding it hard to land steady employment in a down economy.

Parra, a native of Mexico, said he has friends who left Hoover for North Carolina and Florida in search of jobs.

“A lot of people, they have to go somewhere else to find work,” Parra said, speaking through a translator as he stood in the parking lot of the Lorna Place apartments off Lorna Road in Hoover.

Men gather at a gas station on Lorna Road in Hoover in 2003. That stretch of road has been a gathering spot for Hispanic day laborers, many of whom lived in nearby apartments. But where there once were as many as 200 people along the road, now there may be dozens on a given day. (The Birmingham News/Steve Barnette)

As jobs became scarce following the recession that began in 2007, so have the mostly Hispanic day laborers who would regularly congregate in apartment parking lots to solicit work on a daily basis. Where there once were as many as 200 people huddled along Lorna and Patton Chapel roads when the economy bustled, now there may be dozens.

“You can definitely tell there has been a drop,” said Daniel Waseka, an assistant manager at the BP station across the street on Lorna. “I used to see a lot of them. Now, it’s not so many.”

Hoover Mayor Tony Petelos said there are several apartment complexes along Lorna Road that are half-empty, prompting him to speculate that some of the foreign-born Hispanics have returned to their native countries or moved elsewhere.

The emergence of the day laborer population in Hoover sparked much controversy in years past as many residents complained about loitering and questioned whether they were in the country legally. As their numbers decreased, so have the complaints.

Hoover’s school system also has seen a dip in the number of students enrolled in its English Language Learner program, of which more than half the students are Hispanic. There have been as many as 830 students in the program in the past five years, but that number had dropped to 520 this past December, said Barbara Mayer, director of instructional support for Hoover City Schools.

She can’t document whether one language group had dropped more than another, but “there has certainly been a decline,” Mayer said.

School officials cannot pinpoint reasons for the drop, but anecdotal information suggests many Hispanics who were in Hoover bought homes in parts of north Shelby County where homes may be more affordable, or left for Mexico or other places because of the recession, Mayer said.

Yanyi Djamba, director of the Center for Demographic Research at Auburn University at Montgomery, said it is not unusual for Hispanics to have been affected more by the economy because they are more likely to fill low-wage and low-skilled positions.

Landscaping, construction and the service industries depend heavily on migrant workers. “This kind of work, Alabama people are less likely going to take,” Djamba said.

Jay Reed, president of the Associated Builders and Contractors of Alabama, said the association has seen a decrease in immigrant labor on job sites. As there has been a decrease in commercial projects, employers have hired fewer people, he said.

Reed said there is a concern that once the economy rebounds, there could be a shortage of skilled workers in construction. His association has been engaged in the Go Build campaign that aims to educate young people on the benefits of learning a skilled trade. About one-third of the skilled tradesmen in the construction industry are age 50 and older, he said.

Nationally, a study by the Pew Hispanic Center estimates there was a decline in the number of immigrants entering the United States without documents between 2007 and 2009, the height of the economic recession. However, the number stabilized in 2010, said Jeff Passel, a senior demographer with the Washington, D.C.-based nonpartisan research organization.

Passel said there is no evidence to suggest a huge return of immigrants back to Mexico, which has the largest percentage of unauthorized migrants among Latin American countries nationally and in Alabama.

The Hispanic population in Alabama grew 145 percent between 2000 and 2010, the second largest percentage increase behind South Carolina, according to an analysis of U.S. Census numbers by the Pew Research Center. Approximately 186,000 Hispanics lived in Alabama as of the 2010 Census, up from 76,000 in 2000.

Sister Gabriela Ramirez, director of the Multicultural Resource Center on Victory Lane in Hoover, said she has encountered day laborers who would like to go back to their countries, but they lack resources to return home.

“The problem is they don’t have money or the tickets,” she said. “It’s hard for them to make money for them to survive.”

The resource center has helped provide food to those who are struggling, she said.

The scarce job market has prompted day laborers who normally work in construction to reach out to restaurants for work.

Liset Hernandez, an assistant manager at the Iguana Grill in Hoover, said a lot more people have come in asking for applications. Daniel Valencia, manager of Taqueria Valencia 2, also in Hoover, said most Hispanic immigrants like to work in construction, but right now they’re trying to find jobs in other fields.

In what may be another sign of the economic downturn, Diana Rivas, who handles money transfers at El Mercado grocery store in Hoover, said she has seen a decline in the number of people coming in to send money back home to their families in other countries. Four years ago, she said there would be $400 in money transfers a day. Now, the transfers amount to about $100 a day, she said.

Rivas said she also knows many day laborers have moved out of Hoover to places such as Leeds, where rent is cheaper.

But some say the recession may not be the only reason Hispanic day laborers have moved out of Hoover and some other nearby cities.

George Huddleston III, a lawyer who in 2005 and 2006 filed lawsuits against the city of Hoover, alleging that police violated Hispanics’ civil rights with illegal searches and other practices Huddleston claimed were intended to drive Hispanics out of the city, said city leaders made it challenging for Hispanics to live in Hoover.

Huddleston cites a housing ordinance that limits the number of adults to two people per bedroom for rental properties and requires owners of rental property to maintain registries with the names of all their tenants and whether those tenants are adults or minors. Hoover passed its ordinance in 2005, while Helena and Pelham approved similar ordinances in 2007.

Petelos said Hoover’s housing ordinance was a safety issue. “We don’t target any organization or any group,” the mayor said.

Huddleston’s clients agreed to drop their federal lawsuits in 2008 after the city committed to treat Hispanics fairly. Petelos said Hoover police do not engage in racial profiling but work to stop crime, regardless of a person’s race or ethnicity. “If you’re creating a crime or traffic violation, Hoover police will stop you,” he said. “We don’t care what nationality or color or background, they will stop you, and in most cases, you will get a ticket.”

The issue of day laborers gathering in public places has sparked controversy in Hoover in the past. In 2004, candidates, especially those running for Hoover mayor, proposed initiatives to crack down on undocumented immigrants. They talked of razing apartments, trying to get a federal immigration agent stationed in the Hoover area and training a police task force.

The city bought the 136-unit La Chateau Apartments at the corner of Lorna Road and Patton Chapel Road for $2.4 million in December, with plans to demolish the complex and market it for commercial development. The property, known for years as Hartwood Apartments, is half-empty and went into foreclosure in August. Petelos said the city will allow residents to remain there until their leases expire.

The complex has been a hangout for Hispanic day laborers for years, but Petelos said the city’s redevelopment effort is not designed to push Hispanics out of Hoover, which has plenty of other apartments in Hoover they can choose.

For Parra, whose wife and three children remain in Mexico, being able to find any work in Hoover helps him live the American dream, he said.

“I’m proud to have a job and help my family,” he said. “A lot of people come to try and better themselves like me.”

Join the conversation by clicking to comment or email Walton at vwalton@bhamnews.com.