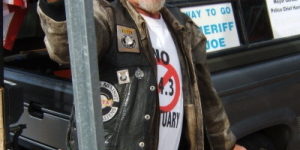 In a surprising turn of events in the pending bench trial of nativist wackjob and noted Yosemite Sam-lookalike Buffalo Rick Galeener, the grizzled 58 year-old entered Phoenix Municipal Court this morning, and pleaded “guilty” to one count of public urination. He was ordered to pay a fine of $194.

According to Chief Assistant City Prosecutor Vicki Hill, the deal had been arranged in advance, and Galeener was supposed to have made an appearance before Thanksgiving to enter the new plea, but didn’t make it in because he had been feelin’ poorly. His trial in Judge Deborah Griffith’s courtroom was set to begin today.

Urinating in public is a class 1 misdemeanor, and carries a potential $2,500 fine, and six months in county stir, where, hypothetically, Galeener might have enjoyed the luxurious ity of his hero, Maricopa County Sheriff Joe Arpaio. The incident, in which Galeener was spotted making water by a local Hispanic lady Paulita Cortes and her two year old son, took place on March 8, nearby the Macehualli Work Center, just south of 25th Street and Bell Road.

Galeener was outside the work center for migrant day-laborers as part of a months-long protest of the site by members of United for a Sovereign America, the most virulent anti-immigrant hate group in the Valley, and one that recently marched outside of Mayor Phil Gordon’s home to protest Gordon’s outspoken criticism of Sheriff Joe’s immigration policies.

According to the Phoenix police report of the incident, Cortes spotted Galeener around noon near his 1992 Ford Ranger truck, “exposing his penis and urinating in a container.” The same report stated Galeener admitted to a police officer that he had urinated, but had done so inside his truck where nobody could see him. It should be noted there’s a McDonalds and a Taco Bell just about a block away from where the incident took place.

Phoenix cops cited Galeener for misdemeanor indecent exposure,but the charge was later changed by the City Prosecutor’s office to public urination, which carries the same penalty. Galeener hired a lawyer, Phoenix attorney Joey Hamby, and insisted on fighting the case, though all the City Prosecutor wanted Galeener to do was plead guilty, pay a fine and walk.

A mean old cuss who has been overheard in the past referring to non-whites as “monkeys,” and who has a Web site where he proudly proclaims, “I hate illegals,” among other racist gibberish, Galeener refused cop to the al fresco whiz up until the last minute. Macehualli’s director, Salavador Reza, said Galeener’s lawyer questioned one of the cops involved in the arrest, the victim Paulita Cortes, and Reza himself, long before the trial date.

“The lawyer tried to portray [Galeener] as a respectable person,” related Reza. “I basically said I thought he was an eccentric and had a foul-mouth. That’s about it.”

Reza said he believed Galeener and his lawyer wanted to prove some conspiracy against Galeener existed between the cop, Cortes, and Reza. But there was no proof of such an unlikely scenario. Told of Galeener’s plea deal, Reza thought the Gabby Hayes doppelganger had gotten off easy.

“If any day laborer had done that in a white neighborhood, they’d probably be in Arpaio’s jail as a sexual predator,” said Reza. “He was cut a break. On the other hand, I think he had to pay a lot of money to his lawyer. And it showed him for who he is, somebody who’s so crazed with hate, that he’ll go to extremes to prove a point.”

Galeener’s earned a certain amount of infamy for his nativist activities, getting written up by the Southern Poverty Law Center’s Intelligence Report magazine, being parodied by pro-immigrant activists, even inspiring a Buffalo Rick impersonator at a recent Halloween/ Day of the Dead celebration, complete with a fake bottle of urine. No doubt his recent plea of guilty will only add to his unsavory reputation.