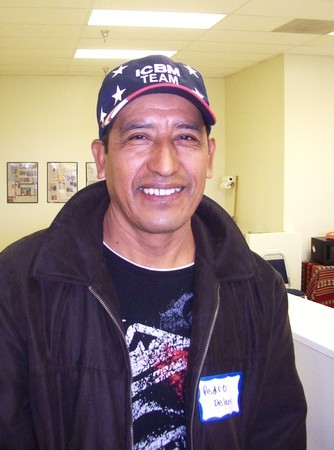 Facility is culmination of four years of community organizing.

Pedro DeLeon, try 50, one of the workers, said he was glad the center was opening. Credit: Anita Klimko

Organizers on Saturday opened the Centreville Labor Resource Center, an expansive facility that will provide an in-door gathering point for day laborers while they wait for jobs—getting them off the street.

The center is a culmination of a four-year effort by the Centreville Immigration Forum to provide the workers with a safe place to wait other than out-of-doors near the Centreville Regional Library. The center is in the Centreville Square Shopping Center, in a space donated by plaza owner and developer Albert J. Dwoskin, a longtime supporter of the center.

“This is a miracle that we were able to get this done,” said Ed Duggan, a Centreville real estate agent and member of the forum’s board of directors. “I’m sympathetic to a guy who will cross thousands of miles just for the chance to stand outside in the winter looking for a job.”

About 75 people attended the ribbon-cutting on Saturday, which was meant to show off the space to the community before it opens for business on Monday. In the crowd were a handful of the day laborers who will be using the center. Many of the workers are handy at remodeling and helped renovate the office space, said center Director Shani Moser, of Vienna.

It is privately funded and receives no public money, unlike other day labor centers, Moser said. The center will not set minimum rates for wages, which will ultimately be negotiated between the worker and his potential employer, she said.

The creation of the center has been met with criticism from some in the community. Dwoskin, of McLean, said he was glad that the organizers were able to see the project to fruition.

“Sometimes you are going to cause a little friction when you are trying to do something good,” Dwoskin said. “The ones who showed the real courage are the volunteers who saw this through. This is an example of a community coming together to do the right thing.”

It will be open from 6 a.m. until noon Monday through Saturday. Workers will sign up for jobs by specialty, many are expert drywallers or painters, and will be hired on a first-come basis by area companies who need the help. There will also be a general worker category.

Organizers anticipate that eventually about 40-60 workers a day will use the center. Centreville is home to a tight-knit community of about a total of 100-150 day laborers, most of whom are drawn from the same impoverished, rural section of Guatemala. As workers and employers learn about the center, organizers hope that the practice of hiring day laborers from the street will fade away.

Pedro DeLeon, 50, one of the workers, said he was glad the center was opening. “We are really excited and happy about it,” said DeLeon, a painter. “It will give us a safe place and will also give the contractors a safe place to hire us.”

Sully District Supervisor Michael Frey (R), a longtime advocate of the center, saw the opening as a win-win situation.

“It will eliminate the concerns of the workers who said they were sometimes treated unfairly,” Frey said, “and it will get them off the streets—which was a serious safety concern for the community,”