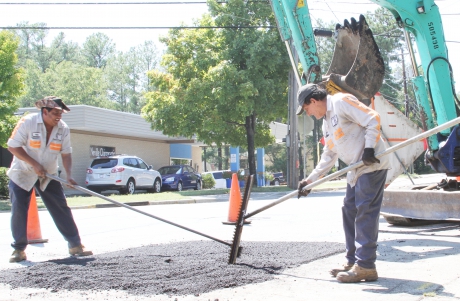 Susano Soto, left, order and Lee Johnson, right, work for Raleigh’s Blalock Paving company, which hires many of the day laborers who gather in the area.

Day laborers in the area stand on the corner of Jones Ferry Road and Davie Road, rain or shine.

But Board of Alderman candidates — and local labor advocates ­— want to change that.

At a meeting this week organized by Orange County Justice United, community advocates created location and fundraising committees to work toward creating a center for the day laborers.

“While we take the situation further, we’re trying to identify short-term things we can do and long-term things we should do,” said Julio Olmos, community organizing director for El Centro Hispano.

He said the first short-term step is putting Port-A-Johns at the location.

And though the Carrboro Board of Aldermen is not spearheading the project, incumbent and 2011 candidate Dan Coleman said the board — which fellow candidate Lydia Lavelle also sits on — looks to support the initiative.

Since many day laborers are Hispanic, the main location being considered is El Centro Hispano in Carrboro, Coleman said.

“The key point is that El Centro is intimately connected with the Hispanic community that day laborers mostly come from,” he said.

“So they are in a better position than the town to address these issues.”

Olmos said El Centro’s Carrboro leaders have not yet spoken to its landlord about a restriction in the location’s contract that could disallow the project.

Pilar Rocha-Goldberg, the CEO of El Centro, said the organization talked to representatives from the National Day Laborer Organizing Network in June about the pros and cons of day laborer centers.

The ideal center would include English as a second language and vocational classes, child care, and legal services for the workers and their families, Coleman said.

Coleman said there were reportedly issues with wage theft, when workers do their job and employers do not pay.

The center would be necessary to help the day laborers, who might not understand the American legal system, he said.

Olmos said day laborers he spoke with said some people who congregated in the area are there just to “mess around.”

He said day laborers actually looking for work need to have good relationships with police officers to report the others.

Board of Aldermen candidate Michelle Johnson said any solution would have to address the problems from all sides.

“At best we need to have a holistic view, and I think the holistic version would have job skill training and making sure the workers weren’t getting abused,” Johnson said.

There are more than 70 day laborer centers in the country, Coleman said.

“If people locally look at what’s been achieved elsewhere, they’ll find a way to craft what’s best,” he said.

“I just don’t think that what they have now is working.”