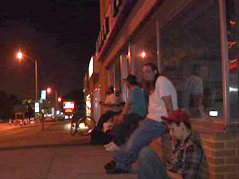 The walk to work begins well before sunrise for some Sioux Falls laborers. They line up four hours early just to get a chance at a 12-hour shift.

SIOUX FALLS, SD – The walk to work begins well before sunrise for some Sioux Falls laborers. They line up four hours early just to get a chance at a 12-hour shift.

When permanent job leads dry up, day labor is often the only way to make ends meet. But finding the work can mean being competitive and getting in line long before many others are even awake.

For five men in the early morning hours, 26th Street and Cliff Avenue is the most uncertain corner in Sioux Falls.

“The sooner you get here the better your chances are of getting out,” day laborer Dave Beers said.

If you can even get out at all. Dave Beers has been lining up outside Labor Ready every morning for years now, just for a chance at a paycheck.

“It could vary and it depends on the weather too. If it rains, most of the outdoor jobs could be cancelled,” Beers said.

But Beers is lucky; he’s on a repeat list at a packaging company that usually takes up to 13 people each day.

“I generally leave my place at 2 a.m. And I walk down here. It’s about a 30-35 minute walk,” day laborer Rodney Doscher said.

That’s why Rodeney Doscher is first in line. He hopes to get set with Beers Friday morning.

“Not knowing if you’re going to get out is only tough if you’re counting on getting out in that particular day because you might need to get money to get rent covered,” Doscher said.

And that’s something all these workers worry about every day. But they say, lately the work has been steady, even though they can’t get a permanent job.

“I have applications out all over town. You can’t get no calls back. So, the only way I can pay bills is come up here and work,” Beers said.

And compete just for that chance.

Workers say opportunities are better during the summer than they are when the snow flies. Since many summer jobs are outside, there’s also competition to be indoors out of the elements, which is another reason why they line up so early.

DHS Cannot Rule by Decree
In a shocking announcement by ICE late Friday afternoon announcement where the agency announced its attempt to unilaterally nullify years of contracts and agreements with 39 state partners. The agency will inform state officials that participation in the controversial Se Communities program which is currently under investigation by the Office of the Inspector General and which is the subject of intense criticism, is mandatory.
Chris Newman, Legal Director of the National Day Laborer Organizing Network issued this statement:
“Today’s announcement confirms ICE’s status as a rogue agency. The level of deception involved in S-Comm so far has been alarming , but this moves things to another level. A contract is a contract—but apparently not when it comes to ICE.
A federal judge already found that DHS and ICE went out of their way to mislead the public about Se Communities. Today’s announcement shows that ICE also systematically misled the states, engaging in protracted negotiations–at substantial cost to the American public–for what it now claims are sham contracts.
All the deception in the world can’t hide the fact that the S-Comm is horrible policy. By entangling local police in immigration enforcement, S-Comm is criminalizing immigrants and leading to the Arizonification of the country. Ultimately, the announcement today only puts into further question the legal basis for the program. ICE can no longer be trusted to police itself.”
…

New York, NY.
What: Courtroom Arguments in NDLON v. ICE FOIA litigation
Where: Manhattan, Federal District Court.
When: August 11th.
Next Thursday, August 11th, advocates will argue for the release of key documents the agency continues to withhold related to the Se Communities opt-out policies. Upon reviewing certain of the unredacted documents that are the subject of this challenge, Federal District Court Judge Shira Scheindlin concluded in a scathing opinion, “There is ample evidence that ICE and DHS have gone out of their way to mislead the public about Se Communities,” and ordered the agency to release certain documents that could not be withheld simply because they might embarrass DHS and ICE.

In the year and a half since the beginning of the FOIA litigation, the documents that have been released so far shed light on a secretive and over-reaching deportation program. As the dangerous scope and impact of the program has been uncovered, a consensus has grown calling for the program’s termination. Governors in Illinois, New York, and Massachusetts have sought to opt-out of the program.

In an attempt to preempt the embarrassing documents that the court has ordered released and the conclusive results of the OIG investigation to be completed this winter, ICE and DHS have rolled out a series of cosmetic tweaks and a taskforce to “study” the program. These announcements have been widely condemned as insufficient given the civil rights crisis created by the program.

“If what we’ve seen so far tells us anything, it’s that ICE is an agency that cannot be trusted. The court has ordered ICE to release documents that FOIA gives the public a right to access. But the agency continues to stonewall and delay turning them over. The constantly shifting policies and lack of transparency about those policies, truly make it difficult to take what ICE says at face value. ” explained, Bridget Kessler, lawyer for Benjamin Cardozo School of Law.
Chris Newman of the National Day Laborer Organizing Network added,”DHS has far more interest in the politics of SCOMM than it does in developing a lawful policy that actually serves local communities. While DHS has moved at breakneck speed to advance a dubious program with media spin, it’s strategy in this litigation has been characterized by one word: delay. Thankfully, federal courts- and not DHS- will have the last word and will ultimately compel disclosure of information owed to the public and required by federal law.”…