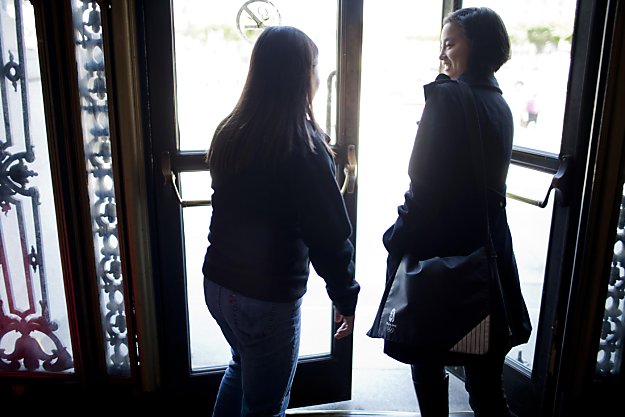 Li Shuang Li (left), a victim of wage theft, and Shaw San Liu are working to stop the practice. Photo: Stephen Lam / Special to The Chronicle

Li Shuang Li waited tables six days a week in a San Francisco Chinatown restaurant where workers were yelled at for carrying only one pot of tea in each hand.

She had no health insurance, sick days or vacation. There were three servers for a restaurant that sat 80. Shifts could last 10 hours.

Li counts herself among the lucky ones.

“Some families are in a much worse situation,” Li, 42, said in Cantonese through an interpreter. “There were workers who were not paid wages for three to 10 months.”

It’s part of a national scourge known as wage theft. More than two-thirds of low-wage workers reported some type of pay-related law violation, according to a 2009 report by the National Employment Law Project, which interviewed 4,387 front-line workers in Chicago, Los Angeles and New York.

The theft comes in many forms, including paying less than minimum wage, denying meal and bathroom breaks, and forcing employees to work long hours without overtime. In extreme situations, workers are locked into factories or businesses for 24-hour shifts, advocates said.

“It’s a huge problem in the city of San Francisco, in the state of California and nationally,” state Labor Commissioner Julie Su said. By some estimates, California drops $7 billion a year to wage theft in lost tax revenue and economic participation by low-wage workers, Su said.

There is also the economic pressure to survive.

Some employees who haven’t been paid for months continue to work, believing it’s the only chance to get their money, advocates said.

Eduardo Jaramillo, 35, said he was collecting recyclables in the Mission District before he got a job as a dishwasher and janitor at the Viva Portofino restaurant in San Leandro.

Jaramillo said he knew he wasn’t being paid overtime he was owed after working 12 hours some days, six or seven days a week, for $320 to $350 a week. But he continued working. “I needed my job,” he said.

He quit after about three months, filing a claim for $2,674 with the state labor commissioner, according to an attorney with the nonprofit La Raza Centro Legal. The case is continuing.

His old boss laughed at him, Jaramillo said. Later, he bumped into the man.

“He yelled at me that he’s going to have me deported,” Jaramillo said. A call to the owner of Viva Portofino was not returned.

Such threats are common, officials said, even though state labor laws apply, regardless of immigration status.

“Violations are happening at an increasing rate today in a climate of lax enforcement at the federal level and increasing boldness” by law-breaking employers, said Shaw San Liu, an organizer at the Chinese Progressive Association.

San Francisco officials are trying to tackle the problem. The city has an office dedicated to enforcing local labor laws – the only one of its type in the country. Legislation to tighten enforcement, pushed by community groups like the Chinese Progressive Association, is before the Board of Supervisors.

The workers were forced to work up to 14 hours a day, six days a week, for less than $4 an hour, according to the lawsuit. San Francisco’s minimum wage, which is higher than the state’s, is currently $9.92 an hour.

The owners, Peter Yu and Ada Chiu, are accused of creating fake schedules showing that staff only worked three hours a day.

In 2005, Herrera sued the owners of the defunct King Tin Restaurant, seeking $115,000 in back wages for cheated workers. The restaurant paid $85,000 to settle the case.

Herrera’s office also sed an order in 2006 for the Golden Dragon Restaurant to pay $1.1 million in back wages and penalties.

Since the city’s minimum wage law took effect in 2004, San Francisco officials have recovered nearly $4.4 million in back wages for workers, according to the city’s Office of Labor Standards Enforcement.

“We investigate every complaint we receive,” said Donna Levitt, who heads the office, which has a staff of 16 to enforce labor law, including about six handling minimum wage and paid sick leave violations.

Last year, they received complaints about 81 businesses across the city, she said.

Supervisors David Campos and Eric Mar are the chief sponsors of legislation before the board that would require employers to notify workers of a wage investigation, double the penalty for retaliating against workers to $1,000 and allow investigators to cite employers immediately for violations. Currently, the city has to give the employer notice of the violation and at least 10 days to correct the problem.

Pending amendments would also require the city to resolve labor claims or refer them to a hearing within six months, but Levitt said she doesn’t have the staff to meet that deadline.

“Many investigations are complicated,” she said. “They involve numerous job-site visits, requesting and getting an employer’s records, interviewing employees, interviewing the employer, conducting an audit.”

Li, who now volunteers to help workers in situations like hers, said an economic recovery can’t take hold until wage theft is addressed.

“If you don’t even have enough money to eat until you’re full,” she said, “how are you going to have any kind of money to spend?”

$4.36 million: Amount of stolen wages the city has recovered since 2004 from employers who failed to pay minimum wage.

$22 million: Amount state Division of Labor Standards Enforcement found was owed statewide to workers who had not been properly paid in 2009 – and those were only businesses that got caught.

2,692: Number of employees who have had stolen wages returned to them since 2004 under San Francisco’s minimum wage law.

520: Number of San Francisco businesses that have been the subject of minimum wage complaints since 2004. 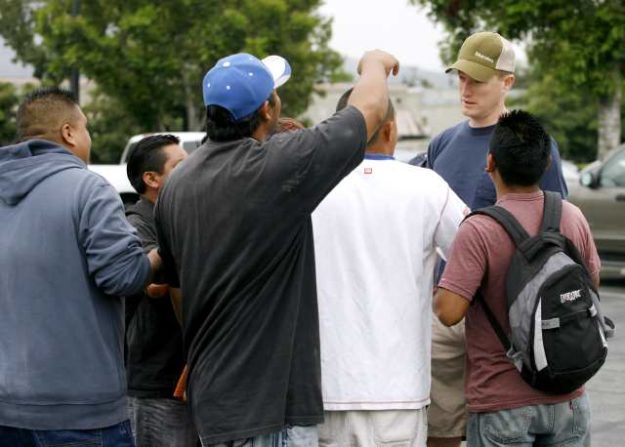 Day laborers crowd around a person, second from right, who was looking for two workers at the parking lot of the Home Depot at 5040 San Fernando Rd. in Glendale on Wednesday, July 13, 2011. (Raul Roa/Staff Photographer)

WEST GLENDALE — Catholic Charities officials have closed the day labor center across from the Home Depot in Glendale after the city, facing a multi-million budget deficit, cut its subsidy for the center.

Created at a time when Glendale banned soliciting from curbs — a law city officials agreed to relax after they were challenged in court — the center has in recent years struggled to attract skeptical workers, who prefer to seek work curbside, officials said.

“When our lawsuit was resolved, we relaxed our rules,” said City Councilman Ara Najarian. “There really was no incentive for people to use the day labor center.”

The City Council voted last month to eliminate the city’s $90,000 subsidy as members worked to fill a projected deficit of $18 million in the General Fund, which pays for basic public services.

In turn, the operators of the center, Catholic Charities of Los Angeles, say they had no choice but to close up as of July 1. The center had guaranteed a minimum hourly wage of $8, restrooms, water, telephone access and a waiting room for workers.

“It was a relevant program. There was more organization. People could come needing some help and they could be picked up for work,” said Moed Khan, director of the San Fernando region for Catholic Charities. “I guess that’s pervasive these days, all of the cuts to government. It’s sad, but that’s the reality.”

The move could raise tensions between neighbors, laborers seeking work and Home Depot, which calls on Glendale police to enforce its no-trespassing clause for solicitors.

“We maintain our no-solicitation policy that prohibits solicitation of any kind on our property,” Home Depot spokeswoman Kathryn Gallagher said in an email.

Since the July 1 closure, more workers have turned to the corner of San Fernando Road and Harvard Street to find employment — pushing other regulars into the Home Depot parking lot, where they run the risk of being kicked out or cited by police.

But some workers say it’s a risk they are willing to take for a couple hours of work.

“I used to work a lot more … but since construction dropped, there is less money,” said Juan Carlos Gonzalez as he sought work inside the parking lot Wednesday morning.

Most days, Gonzalez, a 38-year-old East Los Angeles resident, arrives at the Home Depot site about 8 a.m. and will work as much as he can before heading to his second job at a factory.

While the work often is daunting, Gonzalez, who spoke in Spanish, said he must press on to provide for his six children.

“It’s hard, but there is always a chance to get even a small job,” he said. “And because we are immigrants, it’s much more difficult to get work.

Glendale Police Sgt. John Gilkerson, who oversees police enforcement of the area, said that so far, there has been no change in crime activity or complaints since the day labor center closed.

“I am sorry to see it go because it serviced a certain percentage of workers,” he said.

Enforcement in the area regarding the workers was mostly driven by complaints from businesses and residents, Gilkerson added.