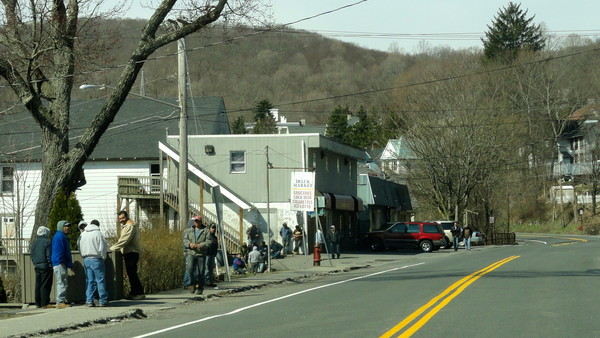 For Workers Who Get Stiffed, Immigration Status is Irrelevant

Day laborers wait for work on Main Street in the Village of Brewster earlier this month. Credit Ashley Tarr

One attorney says that day laborers should get as much information as possible on the person who hired them.

Work is picking up for a group of men who spend winters living off savings and trying to pass time in one-bedroom apartments.

For day laborers in the Village of Brewster, the change in seasons means a chance to earn up to $100 a day or $10 an hour — a huge jump from the $7 some say they would earn for a day’s work in their home country of Guatemala. For most laborers, the possibility of bringing home those wages is enough to keep them waiting for work, scarce and unpredictable as it is sometimes.

According to 15 men who spoke to Patch with the help of translator Jaemie Caban, the Brewster Police Department’s community affairs officer, working in half-year cycles is the norm for this community of immigrants.

“It’s a struggle to try to get work here in Brewster,” one laborer told Caban.

Most of the men hope their labor culminates in one of two ways: the ability to send money back home to support their families, or the ability to save, so they can improve their own lives here in America.

But neither of those goals are easy to reach given the wages they make and the rent they pay. Dressed in blue jeans, sweatshirts or sweaters, sneakers or work boots and the occasional “New York City” baseball cap, the group of day laborers standing in front of Maximum Deli on a morning in early April chatted back and forth before agreeing on a range of their average annual incomes and housing costs: Between $8,000 and $12,000, and $400 a month, respectively.

Most said they send at least half of the money back to their home countries. Many shook their heads when asked if they always receive their pay.

“It happens often where they get picked up for work and never get paid for the work they did,” Caban explained after listening to the men for a few moments.

The laborers, whose ages range from 20 to 50, said temporary employers sometimes pick them up for what is supposed to be a multi-day construction job. After the first day—which could last beyond eight hours, as one man said there is no “set time”—the workers are dropped off and told they will be paid the next day when they start the second portion of the job. Often times the men, especially ones who are new and still learning the ropes, never see the person who hired them again.

Earlier this month Caban had one laborer come to her in tears because he was not paid the $800 he was promised.

“I told him it was a civil manner,” she said. “I just advised him to try to get a lawyer. There are lawyers out there that would help because this happens often.”

Sometimes employers scare workers from pursuing unpaid wages with threats of contacting Immigration Services. Many of the men Patch spoke with are here illegally; one said that a number of them are trying to get their green cards. According to that day laborer, the financial and time commitments are challenges. He has spent more than $7,000 so far and is waiting on at least two more court appearances.

The Westchester Hispanic Coalition provides resources for immigrants who are trying to attain legal residency. Based in White Plains, the coalition is also a place where laborers can learn their rights and seek assistance in pursuing unpaid wages.

According to Corinne S. Beth, an immigration attorney with the coalition, employers’ threats should be taken with a grain of salt, as people who hire undocumented workers are breaking the law themselves.

“Legally speaking, immigration status is completely irrelevant to the money a person is owed,” she said.

Beth said it is important for the worker to have as much information on the employer as possible for lawyers at the coalition. They will usually call first, then send a demand letter. If neither of those options are successful, the case could go to small claims court.

While Caban was speaking with the men a car pulled up. The driver asked if he was free to hire the men, two of who were already walking toward the vehicle. They hopped in without any questions.

“The majority of the time they don’t get the name,” Caban said. “They’ll take anything.”

The coalition sees new cases like this almost every week, but there are plenty of workers who do not reach out for help, Beth said. The New York State Department of Labor did not return phone calls seeking specifics on the number of unpaid wage claims submitted last year.

Even with the sometimes sporadic payments and unsteady work, many of the laborers said their experiences in America are pleasant.

“What he wants people to see,” Caban translated for a man who answered many of the questions on behalf of the group, “is that … they’re not all bad.”

The U.S. Court of Appeals decision, released Tuesday, supports a temporary restraining order against the Town of Oyster Bay.

The 2009 ordinance makes it a crime to solicit employment by shouting at cars and waving arms or signs.

Town officials argued that the law was intended to ensure public safety. Critics say it violates the workers’ rights.

The town runs through the center of Long Island from the Atlantic Ocean to the Long Island Sound.

Town Supervisor John Venditto (vehn-DIH’-toh) said in a statement he’s pleased the court did not reject the ordinance as unconstitutional. He said the town looks forward to a full hearing on the matter in court.

Today California Representative Zoe Lofgren (16th District) called on the Secretary of Homeland Security Janet Napolitano, ICE Director John Morton, as well as the
Inspector General of the Department of Homeland Security and ICE’s Office of Professional Responsibility (OPD) to investigate ICE’s Se Communities fingerprint-
sharing program in two separate letters. Rights groups NDLON, CCR and Cardozo support Lofgren’s call for an investigation into Se Communities and whether local
jurisdictions and states have the ability to “opt out” of the program.
In her letter to the OPD, Lofgren wrote: “It is unacceptable for government officials to essentially lie to local governments, Members of Congress, and the public…It is critically important you thoroughly investigate this matter and that any misconduct result in real consequences.”
Se Communities has been criticized and condemned throughout the country since it began in 2008. Through to a Freedom of Information Act request filed by NDLON,
CCR and Cardozo in April 2010, a series of documents and internal emails have been released by advocates which have shown dishonesty and confusion among federal and
state officials charged with implementing the program.
“It’s a good thing the former governor of Arizona – the one who originally prod Sheriff Joe Arpaio’s 287(g) contract in the first place – doesn’t get to rule by decree
in Washington, DC,” said Chris Newman, Legal Director for National Day Laborer Organizing Network.
For more information on the FOIA lawsuit, please visit http://ccrjustice.org/se-communities or http://uncoverthetruth.org….