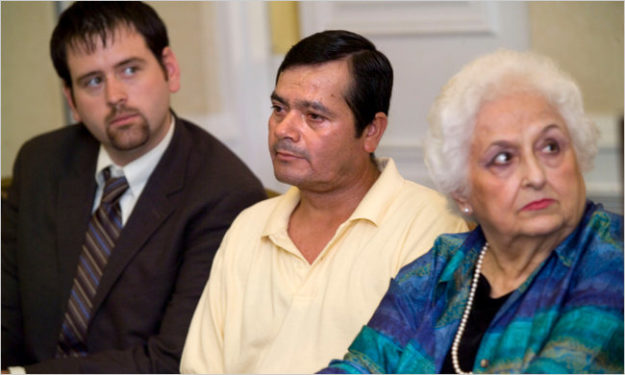 The City of Danbury, Conn., has agreed to pay $400,000 to settle a federal lawsuit brought by eight day laborers who complained that their 2006 arrest in a local police sting operation was illegal and amounted to racial profiling, lawyers for the laborers announced on Wednesday.

Juan Barrera, center, is one of the day laborers arrested in Danbury, Conn., on Sept. 16, 2006 by local police and federal agents. At left, Justin Cox, a Yale Law School student intern, and on right, Maria Cinta Lowe, an immigrant rights advocate.

The case made Danbury a flash point in a national debate over how suburban towns deal with day laborers and whether local authorities should engage in immigration enforcement.

The plaintiffs’ lawyers hailed the settlement as a major victory, calling it the largest amount ever obtained by day laborers and a harsh rebuke to Mayor Mark D. Boughton, who has taken a combative stance on immigration issues and strongly supported the actions of the Police Department.

“We’re thrilled,” said Helen O’Reilly, a law student intern with the Worker and Immigrant Rights Advocacy Clinic at Yale University, which represented the laborers, along with lawyers from Gibson, Dunn & Crutcher. “The message that this sends,” Ms. O’Reilly said, “is that if a city does what Danbury did, and they harass and target Latino day laborers, there are consequences and substantial costs.”

But Mr. Boughton dismissed the settlement as a modest sum and said it would not affect how the local police enforced the law. “It’s very clear that we specifically did not do anything wrong, and we are not changing any of our policies, practices or customs,” he said in an interview.

Under the terms of the settlement, which must still be signed by both sides, the federal government would pay the plaintiffs an additional $250,000 to settle claims against six federal immigration agents who were also named as defendants.

The case stems from a sting operation conducted on Sept. 19, 2006, by an undercover Danbury police officer posing as a contractor. The lawsuit said the officer drove an unmarked van to a park where day laborers had gathered to await employers looking for workers. The officer told the laborers he would hire them to demolish a fence for $11 an hour, but instead drove them to a lot where they were arrested and handed over to federal agents.

The workers were placed in deportation proceedings, which are continuing, Ms. O’Reilly said.

Advocates for day laborers have denounced the arrests as gross civil rights violations. The suit said that the plaintiffs had been arrested without probable cause, and that the arrests kept workers from exercising free speech — the right to signal their availability for jobs.

Juan Barrera, one of the men arrested, said he was celebrating the settlement. “We hope that the rights of each individual and each day laborer who arrives at Kennedy Park to look for work will now be respected,” he said.

Mayor Boughton said he would have liked the case to go to trial, but his insurer advised the city to settle. “At the end of the day, this became a discussion about money and legal fees,” he said. “It had nothing to do with civil rights.”

Barbara Gonzales, of Immigration and Customs Enforcement, said the agency “prioritizes efforts first on those serious criminal aliens who present the greatest risk to the security of our communities.”