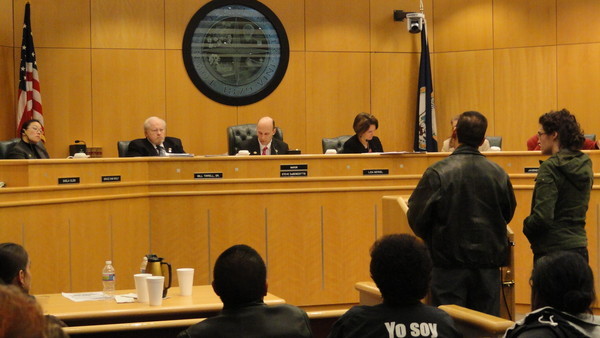 The revised version of the ordinance means solicitation of goods, check services, handbills, view etc. cannot occur in the vehicular roadway, median and gutter area.
By Leslie Perales | 6:00am

The Herndon Town Council voted 4-3 to pass a revised version of the June 8, 2010 street solicitation ordinance on Tuesday night.

The original street solicitation ordinance, passed last June, prohibited people from soliciting goods and services in public highways, including the grassy strip between the property and the sidewalk, the sidewalk, utility strip, curb and gutter, roadway and median.

The revised version passed last night reduces the enforcement area to the road itself and the median, said Town Attorney Richard Kaufman. The ordinance will no longer apply to sidewalks, utility or grassy strips.

The new ordinance changes the terminology from highway to roadway, as the two terms have different definitions associated with them, Kaufman said. Another change is that the ordinance applies to all streets equally, including streets with on street parking, though it exempts private streets, he said.

Other changes included taking out language that suggested what enforcers of the ordinance should look as an act of soliciting, and a note addressing that events such as Herndon Festival are allowed because of town permits and are unaffected by the ordinance, Kaufman said.

Councilwoman Grace Wolf asked if it would be allowed for someone to stand in the gutter area of a roadway on the street level, something she found to be dangerous. Town Manager Art Anselene said the interpretation of the ordinance from a policing perspective includes the gutter area where cars may travel.

Before allowing any comments from the audience, Mayor Steve DeBenedittis reminded the crowd that everyone in attendance was an adult and they should act as such and show respect for one another. He said it would also help the meeting move along quicker.

Herndon resident Ruth Tatlock said the town attorney did a good job on the revised ordinance and it was very thorough. She said it left in necessary safety items and she can accept the ordinance as presented.

Lisa Hernandez, of Herndon, said she feels the revised resolution is a good, positive first step but doesn’t cover everything. She said she felt the original ordinance specified and excluded members of the community. She said she would still like to see the ordinance rescinded entirely.

Dennis Baughan said there was nothing controversial about the original ordinance. He said selling items on and near roadways has always been something that’s been regulated, and the enabling legislation was OK’d in the House of Delegates and passed unanimously in the Virginia Senate.

Herndon resident and former town council member Dave Kirby said he has all the faith in the world in the town’s attorney, and that when Kaufman says the ordinance is constitutionally correct he believes him. He said he saw no reason at all to change the ordinance, but believes many were misinformed about what the ordinance really addressed.

Vice Mayor Lisa Merkel made a motion to pass the revised ordinance with a suggestion for a wording change from Kaufman. “It’s been said over and over in these chambers that this council needs to move on from this and I could not agree more,” she said.

Merkel said the issue has been brought up at nearly every public hearing in the past seven months and she wanted to address it now so the council could close the issue for good. She said after Tuesday night she had no plans to address the ordinance, 287(g) or other day labor issues again.

She said she would do what she believed was best for the town, without consideration for individuals or outside groups such as Virginia New Majority, the Alexandria-based organization that rallied residents to petition the town on the original ordinance.

Councilwoman Sheila Olem said she felt the revised ordinance was a compromise. She said she wasn’t happy with the first ordinance when it was passed and felt it was overkill. She said she didn’t think it provided a very “hometown feel” that area groups couldn’t sell Girl Scout cookies on the sidewalk.

Councilman Jasbinder Singh said during the last six months much has been said about the ordinance. He said many people feel discriminated and threatened by the original ordinance and he felt the town took the language too far. He said there is no demonstrated proof that there is a traffic safety issue and the ordinance was simply trying to address the day labor issue.

Councilman Bill Tirrell said he is sick of people throwing out the race card every time there’s a disagreement. He said just because he disagrees doesn’t mean he is a racist, and the day labor and other social issues aren’t relevant to the ordinance. He said he believes VNM has made the ordinance into a day labor issue when that’s not the case.

Tirrell said Herndon is warm and welcoming to residents here legally and they are wanted. He said if residents are here illegally “this should be a cold harbor for you. Go home. This is not your country.” He said they should let their governments care for them the way they want the United States government to care for them.

“No matter how it’s packaged it’s a concession to Virginia New Majority,” Tirrell said. He said no matter how much some council members try to disassociate themselves from VNM, public perception lead by VNM would still claim to control them. He said it’s unfortunate because he doesn’t believe that to be true.

Tirrell said for him the issue is simply about public safety, just like other distractions while driving, such as putting on makeup, eating, texting or talking on a cell phone. “Distraction is distraction no matter how worthy the cause, and distraction can kill,” he said.

Councilwoman Connie Hutchinson said a lot of the evening’s debate was about definitions of roadways, sidewalks, curb and gutter. She said all the definitions can be hard to understand, but suggested an amendment to the ordinance that would include the utility strip between the sidewalk and curb and gutter.

Wolf said if it were up to her she’d ban all activity other than driving on roads and keeping pedestrians on sidewalks, but that’s unconstitutional. She said her biggest interest was in keeping drivers and pedestrians safe. She said she doesn’t care what color someone’s skin is, they shouldn’t be in the roadway.

Hutchinson said just because the town has not had an accident in recent years that involved a pedestrian and a car does not mean there is no potential, and the ordinance is preventative. She said she didn’t support changing the ordinance, but would support including the utility strip as part of the roadway where solicitations would be banned.

The council first voted on the amendment to include the utility strip in the ordinance as a place where solicitations could not take place. The motion failed 3-4.

“The intent of this is and always was public safety,” he said. “We would not be discussing this, we would not have put it on tonight’s agenda if it weren’t for an outside group of agitators who came to our town to divide. And to do so and to get folks out, I believe they had to mislead people. I think it’s a mistake to change this ordinance at this time.”