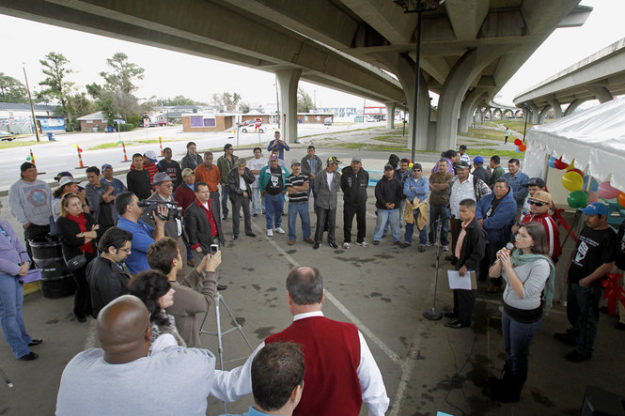 RUSTY COSTANZA / THE TIMES-PICAYUNE Officials with the City of Gretna, day laborers, the Hispanic Chamber of Commerce and Congress of Day Laborers gather for a ribbon cutting for a tented area under the West Bank Expressway for day laborers to go while looking for work in Gretna on Saturday, January 29, 2011.

We live in hard times and the odds seem against us.  But it’s still possible to win dignity and respect for day laborers and all immigrant workers through the sheer power of organizing.  Across the U.S., day laborer centers are under attack.  But on Saturday, January 30, 2011, the City of Gretna, Louisiana, inaugurated a new day laborer center even in the midst of the racist and anti-immigrant sentiment of the region and the nation. The victory was a major reversal of power and a result of over six months of organizing.  It was also a lesson that organized workers can inspire a city to act on principles of inclusion, opportunity, and access for all.

In early 2010, the City Council of Gretna proposed an an ordinance that would criminalize day laborers.  The Congress of Day Laborers successfully won public opinion:

GRETNA SHOULD NOT BAN DAY LABORERS, editorial, May 19 2010
http://www.nola.com/opinions/index.ssf/2010/05/gretna_should_not_ban_day_labo.html

Six months later, the Congress of Day Laborers turned crisis into opportunity.  Not only did we beat back the criminalization ordinance, we negotiated successfully with the Mayor of Gretna to open the first-ever day laborer area in the region, funded by the City, and supported by the police and City Council:

In the current political climate, this represents a ray of hope.  The day laborer center will be a gathering space and a space to organize.  But also represents a broad consensus we were able to organize in Gretna around the idea that strong economies can be based on inclusion, not exclusion — and that public safety means everyone’s safety, including the safety of day laborers.  The Mayor of Gretna stood up at the inauguration publicly committed to the Congress of Day Laborers that the center was the beginning of a dialogue, not the end — and he committed to working on police abuse issues and wage theft. The mayor vowed to make Gretna a “model community” in partnership with day laborers.

Thank you to all those who supported this effort!