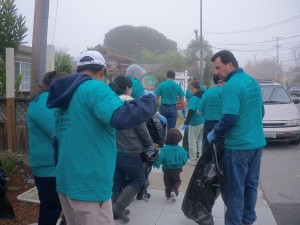 On Martin Luther King Jr. Day, instead of taking the day off, the Day Worker Center members picked up litter off the street. Credit Nicole Baldocchi

Dreams, community and giving back are all things that came to mind for the workers at the Day Worker Center of Mountain View on Martin Luther King, Jr. Day yesterday.

Escuela Avenue and Castro Street became two of the major areas the workers canvassed as they picked up litter on Jan. 17, 2011, the 25th anniversary of the national holiday that Congress designated a national day of service in 1994.

Outside of the center, people slowly gathered to support the effort of the laborers.

Doug Albercht, a Mountain View resident, said he had the day off work and wanted to help the center’s efforts.

“I like to volunteer now and then,” Albercht said. “I learned about community service programs around the world through a church group and this was something nearby I could do.”

The Day Worker Center of Mountain View, located at 113 Escuela Avenue, provides the day laborer community in Mountain View and surrounding cities a place to find work and gain skills, such as English classes, CPR and First Aid training, computer classes and more, according to Executive Director María Marroquín.

“The workers, even though they don’t have a lot of material to give, they want to give back with themselves,” she said.

The center has cleaned up litter in Mountain View on the holiday for the last three years and gives back throughout the year, according to Marroquín. They also help with the community garden on Escuela Avenue, donate blood, assemble desks at Mountain View schools among other things.

“We can say we’re ‘on call’ for the community,” said Marroquín with a smile.

On Monday, about 20 of the center’s members volunteered and some brought their children to help.

Alma Cruz, 15, a sophomore at Gunn High School studied for her finals before the trash-pickup began. Her mom had been successfully placed with a job through the center that lasted a few months but now has begun to look for work again every day.

“I’m volunteering because I think it’s important to help the community just like they’re helping us maintain and keep this center,” Cruz said.

The center has been housed at several different locations; the most recent was a church on Mercy Street. The center moved to its Escuela Avenue home in November.

“After 14 years, we have our own home now,” said Marroquín.

The center sees about 80-90 laborers each day, which gets placed on a list and gains work based on that list.  Each worker finds work an average of once a week at a job site but often get more work in the warmer months, explained Marroquín. Employers seek help for anything from construction and gardening to cleaning and babysitting.

Nine years ago before he came to the center, Jose Vega looked for work outside on El Camino Real and San Antonio Road.

Now, he comes to the center every day where he gets “protection from the cold” and “follows rules” that look good to employers.

Vega volunteered out on the streets yesterday.

“We try to make the city look nice. We want the people to see the difference,” he said. “The city gives us permits and help to stay here. This is very, very good.”