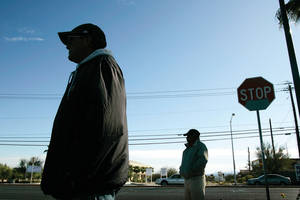 The new faces of day labor

“Times are so bad that I saw an Anglo day laborer standing outside Home Depot the other day.”

In the latest sign of the Las Vegas Valley’s economic free fall, U.S. citizens are starting to show up in the early mornings outside home improvement stores and plant ries across the Las Vegas Valley, jostling with illegal immigrants for a shot at a few hours of work.

“It’s the equivalent of selling apples in the Great Depression,” said Harley Shaiken, chairman of the Center for Latin American studies at the University of California, Berkeley.

But it is not only a sign of the times, they add. If the numbers of citizens among the day laborers in cities across the country continue to grow, it’s likely to increase the ire of followers of TV host Lou Dobbs and others who will see illegal immigrants as stealing food off the tables of the nation’s native-born or naturalized poor.

Or, it may flip certain canards upside down in the immigration debate, easing tensions in some communities.

In the Las Vegas Valley, where the most recent unemployment rate was 13.9 percent, one face of this phenomenon is Ken Buchanan. The 50-year-old describes himself as a “food and beverage” guy, most recently working for four years at Renata’s Sunset Lanes casino and, before that, 30 years in a string of restaurants, hotels and casinos here and in his birthplace, Chicago.

But in 2006 Renata’s closed for remodeling. When the casino reopened as Wildfire, the management did not rehire Buchanan, he said.

In the months that followed, Buchanan discovered the difficulty of seeking work in his fifth decade, eventually winding up at Green Valley Car Wash, where he stayed for about two years, he said.

The banks foreclosed on the house he was renting. In the attempt to grab his things two steps ahead of the constable, he wound up missing work. He lost his job. He became homeless.

A Hispanic man Buchanan met in Renata’s sports book told him he had picked up work standing outside the Home Depot on Pecos Road at Patrick Lane. One July day, Buchanan gave it a try. At first, he got nothing but sunburn. But then he started to get work. Now he’s at the Home Depot six days most weeks.

Pablo Alvarado, executive director of the Los Angeles-based National Day Laborer Organizing Network, said he has been seeing the same thing elsewhere. “It’s happening, though still not in massive numbers,” Alvarado said. In the past six months or so, he has heard of “americanos” on the street corners and parking lots of Silver Spring, Md., Long Island, N.Y., and Southern California locations.

“It’s just beginning,” he said. “But I think it’s only going to increase.”

A recent morning’s swing through the valley produced reports of the same phenomenon. At Star Nursery on Cheyenne Road west of Tenaya Way, Nicolas stood shivering under a hooded sweatshirt, hoping a car or pickup would stop. The Mexican immigrant said he had seen a couple of “white guys” showing up recently, though not on the blustery cold days last week.

At Home Depot on Decatur Boulevard north of Tropicana Avenue, Jose said the same thing, adding that “it’s never more than three or four, but they’re coming out.”

Farther south, in front of Moon Valley Nursery on Eastern Avenue, Israel said a couple of “americanos” — white and black, he added — have come out for work in recent months. “But they tend to stay only a few days.”

As a sman at Moon Valley, Mike Fugitt’s job includes making sure the laborers don’t come into the ry’s parking lot, because their presence draws complaints from some customers. In the past three months or so, he said, more of those laborers have been telling him, “But I’m an American.” That includes some Hispanics, he added. “But I treat them all the same; they can’t be trespassing,” he said.

Workers at all the sites said the presence of the americanos hasn’t made work scarcer or produced any conflict. Some suggested that people hiring day laborers prefer Hispanics anyway, because of their reputation as hard workers.

Shaiken said shaking up the mix at day labor sites may eventually produce conflict in the greater society. “It essentially shreds the argument that Americans don’t want certain jobs,” he said.

In the current economy, he added, “we’re almost sure to see die-hard opponents of illegal immigrants seize on the fact that we have legal workers in day labor markets,” heating an already-inflamed debate.

In the longer term, it may also lead to a more rigorous analysis of future labor markets, including revised estimates of how many immigrants would be needed under a guest worker program, as proposed in recent congressional bills.

At the same time, Shaiken said, the issue won’t become central to the debate before Congress over what is known as comprehensive reform, including a pathway for legalizing millions of workers. “The point is, do we really want a labor market with day labor work as a career path? It’s more a commentary on the economy right now,” he said.

Although Alvarado allowed that the change in day labor sites was an undeniable sign of the withering economy, he also sees a “beautiful irony” in U.S. citizens seeking work as day laborers.

That’s because his organization has defended the free-speech rights of day laborers in at least 10 court cases over more than a decade. Up to now, courts have ruled in favor of the laborers.

“We always knew (these cases) would be useful not only for immigrants, but also for U.S. citizens,” Alvarado said. “We knew there would be a time when the economy would reach this point, and they also would be looking for work this way.”

Buchanan likes to wear a Cubs or White Sox cap as a sign of his Chicago heritage when he stands with one or two Hispanic laborers about 20 yards south of a larger crowd. He said he has gone through an education of sorts in the past four months. He has always worked around Hispanics in restaurants, hotels and casinos, but now he understands the issue of immigration from up close.

His sojourn got off to a rocky start. On one of his first days on the street outside Home Depot, another laborer told him he should move along because too many people were at the spot.

“I told him, ‘I’m an American citizen and you’re trying to push me off American soil?’?” The man walked away, and Buchanan says he hasn’t had another problem with his competitors since.

Instead, Buchanan has found himself defending the rights of his fellow laborers on more than one occasion. One day, a man tried to hire a bunch of them for $5 an hour. Again, Buchanan pulled out the “citizen card.” But this time, he was telling the other person that he, a U.S. citizen, knew about minimum wage laws, and was going to make sure those laws were followed. “I said, ‘You want me to write down your license plate number?’?” Buchanan recalled. The guy drove away.

Now, he said, “I get along with everybody here.”

He stands in a smaller group because he thinks that helps to get work. He reads the daily tea leaves of the trade, like the end of the month being a good time for moving jobs, because many people are moving in or out. His best week so far: $140. His longest stint without work: the first two weeks, “until I learned to be more aggressive.”

Antonio Bernabe, day labor organizer for the Coalition for Humane Immigrant Rights of Los Angeles, said the appearance of more and more U.S. citizens seeking day labor work on corners and in parking lots poses new challenges for organizations such as his. In recent months, he said, he has found himself explaining to a whole new group the legal rights of workers, as well as approaching local authorities to discuss the entry of new people into what he called “the world of day labor.” That group includes blacks and Asians, he said.

Another difference is that now he’s giving those explanations to laborers in English.

Bernabe said organizers came across one case where a local sheriff had been sending officers to answer complaints about day laborers and then found one day that the sheriff’s neighbor, a citizen, was among them. Police in that area have been less likely to harass laborers since then, he said. These events will occur more, changing people’s attitudes in the process, he said.

“For a long time, people have looked at day laborers and said, ‘The problem is the immigrants.’ Now the economy is changing. Now people may see it’s a problem of the labor market, of the rights of workers,” Bernabe said.

Buchanan, meanwhile, looks forward to a future that includes a steady job and an apartment. “I’m trying to dig my way out of this,” he said. When he does, however, he sees himself as a changed man.