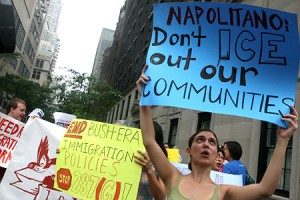 When President Obama’s enemies protest his policies, try it is not a surprise. However, when his friends publicly show their disagreement – and their disappointment – it is time for serious reflection on the administration’s part.

Scores of local immigration advocates and sympathizers – people who can safely be called pro-Obama New Yorkers – felt compelled Wednesday to do exactly that: They let Department of Homeland Security Secretary Janet Napolitano know their strong displeasure with the administration’s about-face on immigration.

“We are getting to the tipping point. Immigrant communities that helped to elect President Obama strongly believed that there would be reforms. Now, there is a creeping sense of betrayal,” saidChung-Wha Hong, executive director of theNew York Immigration Coalition, which organized the demonstration. “There is a huge disconnect and contradiction between what the President is saying and what Secretary Napolitano is doing. You can’t have it both ways.”

The protesters rallied outside the offices of theCouncil on Foreign Relations, at Park Ave. and 68 St., where Napolitano was giving a speech. They protested her recently announced expansion of the disastrous 287(g) program that authorizes police, traffic cops and correction officers to arrest immigrants without cause. The program has been under intensive investigation by theJustice Departmentfor rampant mismanagement on the part ofImmigration and Customs Enforcement, and racial profiling on the part of lawmen. The most notorious example is the infamousSheriff Joe Arpaio, ofMaricopa County,Ariz., who operates the nation’s largest 287(g) contract.

At the time of its inception the 287(g) was extolled as a public safety program designed to get “illegal criminal aliens” off the streets. Instead, the program has become synonymous with racial profiling and human rights abuse.

In reality, the much-ballyhooed program has done nothing to increase public safety, enhance national security or solve the immigration crisis. Many police chiefs across the nation oppose the 287(g), arguing it undermines community trust and makes their job much more difficult.

The administration’s decision to expand the controversial program is a slap in the face to those who believed President Obama’s pledge to tackle immigration reform.

“President Obama must reject programs that undermine American values and instead focus on providing millions of immigrants with a path to legalization while at the same time protecting Americans’ constitutional rights,” said Udi Ofer, the advocacy director of theNew York Civil Liberties Union, one of the organizations that participated in the protest.

Not only is the administration expanding the 287(g), but Napolitano also is continuing the use of the e-Verify database, another deeply flawed law enforcement measure. The database is used to check a person’s work eligibility, even though government studies have shown that e-Verify is full of errors that could cause hundreds of thousands of legal residents to lose their jobs.

The fact is that six months into the Obama’s administration, its actions are nothing more than a continuation of Bush’s backwards and unfair policies and have little to do with the President’s vehement promises to work for a fair and comprehensive immigration reform.

Those actions have many wondering if the “change” and “hope” mantras so effectively used during the presidential campaign were just convenient vote-getting gimmicks.

Wednesday was the first public protest by President Obama’s friends against some of his policies. But when it comes to the administration’s profoundly unjust immigration actions, it certainly won’t be the last.